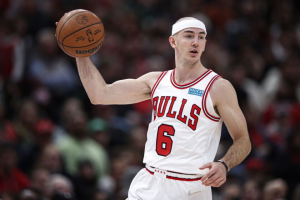 Chicago Bulls point guard Alex Caruso is probable for Wednesday’s season-opener against the Miami Heat due to a left calf contusion.

Caruso should be fine for the Bulls’ opener on Wednesday. He’s expected to play a larger role off the bench to begin the season while Lonzo Ball is sidelined with a knee injury. The 2016 undrafted free agent set career-bests across the board last year in his first season with the Bulls.

Caruso has a good shot to play in the opener, and he’ll be needed more than usual if Zach Lavine (listed as questionable with a knee injury) is unable to go. Fantasy managers can count on valuable some steals and assists from Caruso anytime he’s on the court.

The 28-year-old was productive, last season despite playing in only 41 games due to injury, averaging 7.4 points, 3.6 rebounds, and 1.7 steals. His shooting numbers aren’t the best, and he’s also not the most proficient scorer. Yet, for the category managers looking for steals, Caruso is your guy.

It’s unclear when Caruso suffered the calf injury, but it appears to be a minor issue and shouldn’t impact the veteran guard from suiting up for the first game of the season. With Lonzo Ball (knee) sidelined, second-year guard Ayo Dosunmu will enter the starting lineup, while Caruso, Goran Dragic and Coby White garner sizable roles off the bench.