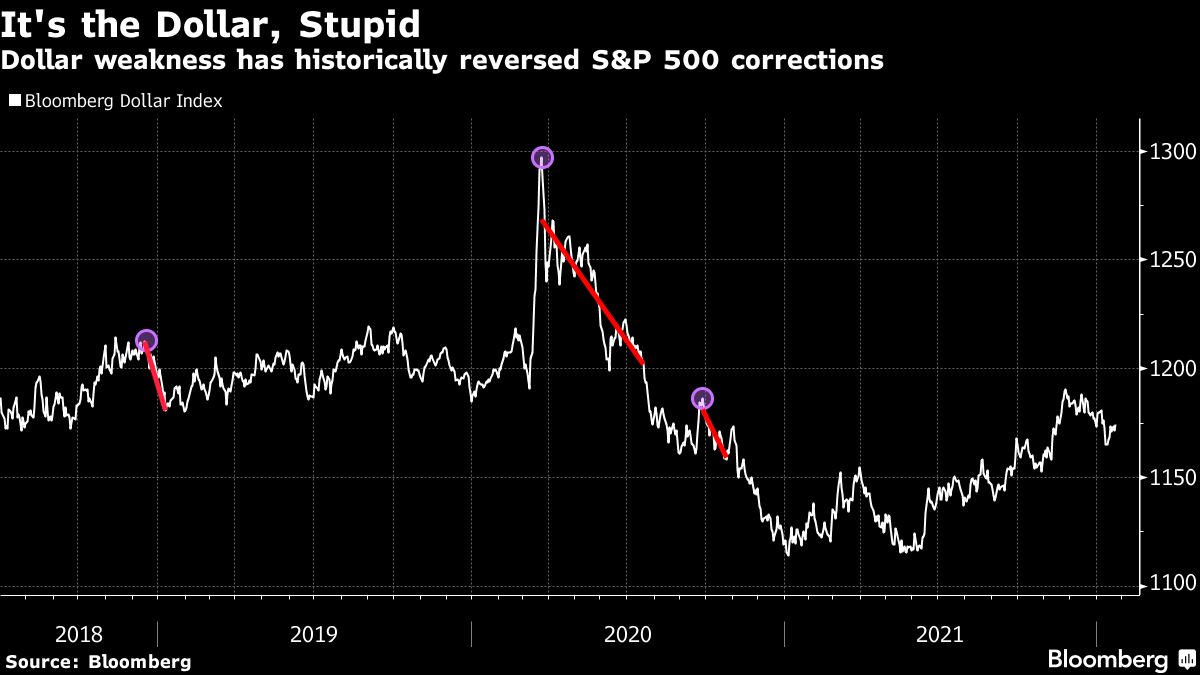 Apple Inc. just suffered its worst week since last February and is down again Monday. What can reverse this trend? If history is any guide, look for a weaker dollar.

The tech giant hit a $3 trillion market capitalization on Jan. 3. Since then, the stock has lost 13%, while the S&P 500 has lost 11% with mega-cap tech shares taking a beating. The correlation isn’t new. Each time Apple’s market value has hit a trillion-dollar milestone, the broad market gauge has entered a technical correction. And a dollar slump has been the key to turning it around.

When Apple first reached a market cap of $1 trillion in August 2018, it sparked a 20% technical correction in the S&P 500. It happened again two years later, as it breached the $2 trillion milestone and then helped fuel the tech wreck of 2020. Obviously, other factors have played a role, like Federal Reserve decisions and macro economic developments. But there is no mistaking Apple’s role as a stock-market bellwether.

What’s notable is in each instance the S&P turned around when the dollar started to weaken — and big tech led the way higher. Today’s Chart of the Day shows that pattern in the technical corrections of the last three years. It happened at the end of 2018, setting up a rally for the start of 2019. It was there again in 2020, when the dollar’s peak that March coincided with the equities bear-market bottom.

The logic isn’t complicated. In times of crisis or global uncertainty, major U.S. assets tend to be considered havens for international buyers. To stock-market investors, that means big tech. But the demand for safety can make the assets overvalued, which is why dollar weakness serves as a key gauge for foreign investors. Tech has driven growth during much of the post-pandemic era, thanks to flows from abroad. And in turn, it’s created an inverse correlation between the dollar and U.S. equities.

The correlation between the Bloomberg Dollar Index and Apple shares, as a proxy for big tech shares, is a mere 0.2. That may not be statistically significant, but note that during the bottoms of the last two corrections, the inverse correlation between the two assets was 0.18. The correlation isn’t stronger is because it has typically been preceded by dollar strength — this time, attributed to hawkish Fed policy. Therefore, the more recent moves don’t hold as much weight.

The point being, keep an eye on the dollar. As it weakens and gives foreign investors more incentive, the S&P 500 is likely to reverse the selling that has thus far marked 2022. And history says big tech, including Apple, will play a significant role in that.