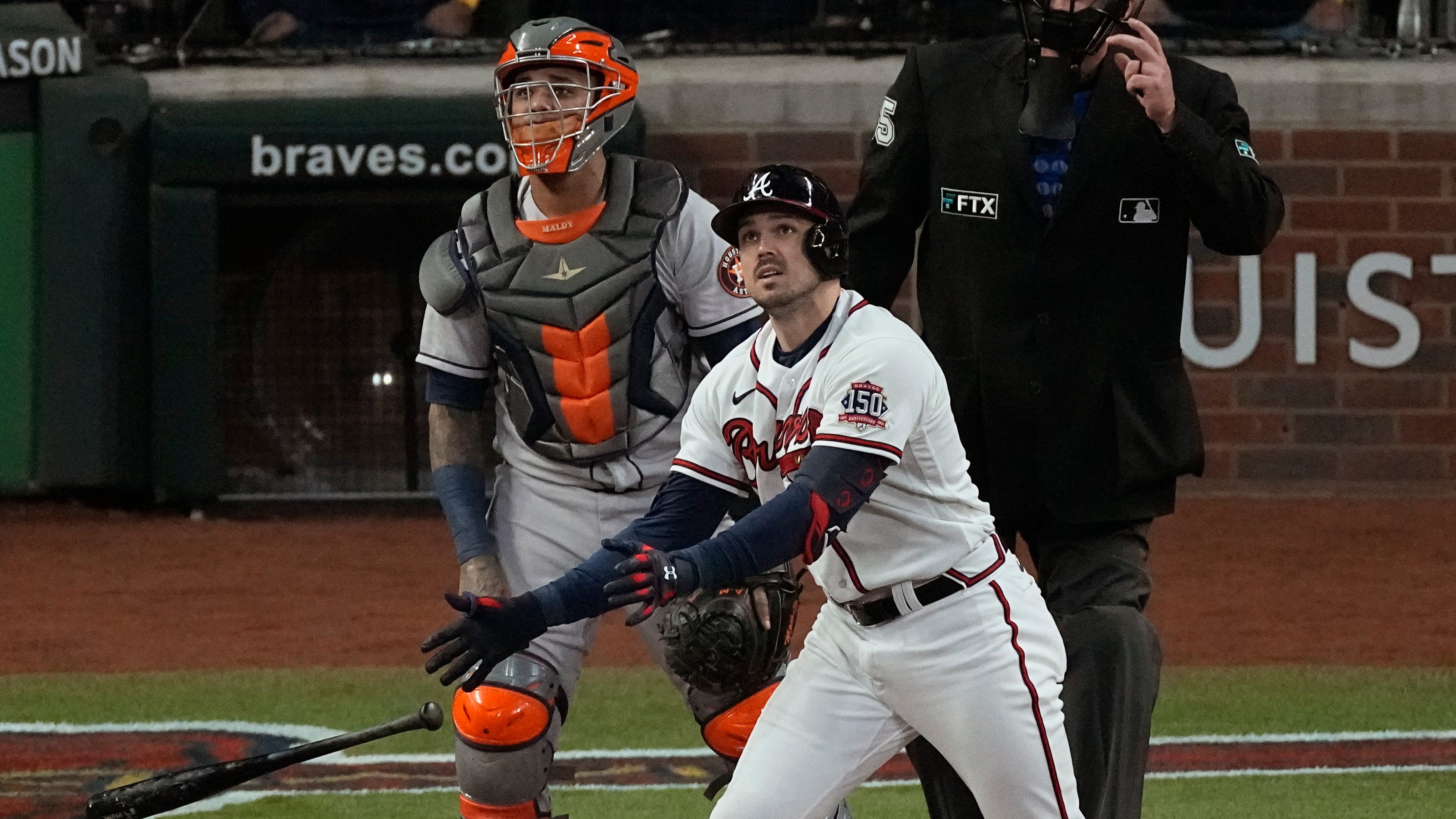 The Latest on Game 5 of the World Series (all times local):

Carlos Correa had three hits, Martin Maldonado found three different ways to drive in runs and pinch-hitter Marwin Gonzalez blooped a tiebreaking, two-run single in the fifth inning to lead the Houston Astros over the Atlanta Braves 9-5 and cut their World Series deficit to three games to two.

Adam Duvall’s first-inning grand slam off Framber Valdez had built a 4-0 lead, but the Astros scored twice in the second off rookie Tucker Davidson, making his first big league appearance since mid-June, then tied the score in the third.

Freddie Freeman’s home run in the bottom half put the Braves back ahead as they tried to close out their first title since 1995, but A.J. Minter walked Maldonado with the bases loaded in the fifth and Gonzalez singled for a 7-5 lead.

Jose Altuve and the Astros added on in the eighth inning, pushing their lead to 9-5 and moving closer to taking this World Series back to Houston.

Altuve led off the eighth with a walk, took second after getting picked off and came around to score on Carlos Correa’s single. It was Altuve’s 21st run this postseason, matching Carlos Beltrán’s output in 2004 for most in a postseason.

Correa’s hit was his third of the game, and Yuli Gurriel followed with his third hit, too, but both were left stranded.

Kendall Graveman worked around Austin Riley’s leadoff single in the bottom of the eighth to preserve the four-run advantage.

A big swing by light-hitting catcher Martín Maldonado gave the Astros another run in the seventh inning, and they carried an 8-5 lead over Atlanta into the eighth.

Trailing 3-1 in the Series, Houston is six outs from forcing a Game 6 back home on Tuesday night.

Kyle Tucker doubled with one out in the seventh off left-hander Drew Smyly and scored when Maldonado lined a two-out single into left field. It was the third RBI of the game for Maldonado, who began the night 4 for 41 this postseason with two RBIs.

Houston has come back again, scoring three times with two outs in the fifth inning to take a 7-5 lead over the Atlanta Braves into the sixth.

Carlos Correa had a leadoff single against lefty reliever A.J. Minter for his second hit of the night. Correa moved up on Yuli Gurriel’s one-out single, and both runners advanced when Kyle Tucker grounded out to the right side.

Alex Bregman was intentionally walked to bring up light-hitting catcher Martín Maldonado with the bases loaded. Looking to get on base and tie the game any which way, Maldonado moved right on top of the plate and appeared to be taking all the way early in the count.

He showed bunt on 3-1, and Minter missed way inside to force in the tying run with a walk. Pinch-hitter Marwin Gonzalez dumped the next pitch into shallow left field for a two-run single that put the Astros ahead for the first time in Game 5 after they trailed 4-0 in the first.

Gonzalez, added to the roster for the World Series, fisted a soft looper that came off the bat at just 71 mph and landed only 235 feet from home plate.

Phil Maton came out of the bullpen for Houston in the bottom of the sixth and worked a scoreless inning. He gave up a two-out double to Austin Riley before retiring NLCS MVP Eddie Rosario on a comebacker.

Things settled down a bit in the fourth inning of Game 5 at the World Series.

For the first time all night, both teams made it through their half inning without giving up a run, leaving the Braves with a 5-4 lead.

José Urquidy took over as Houston’s third pitcher of the game and worked around Travis d’Arnaud’s leadoff single.

There was an interesting tidbit in the top half of the inning. The Astros sent up pitcher Zack Greinke as a pinch-hitter — and he delivered a line-drive single to right off Jesse Chavez.

Greinke became the first pitcher with a pinch hit in the World Series since Jack Bentley had two of them in 1923.

Greinke now has two hits in this Series, just as many as Astros star third baseman Alex Bregman, who is struggling so badly that Houston dropped him to seventh in the batting order for Game 5.

Nothing came of Greinke’s rather historic hit. Atlanta’s third pitcher, A.J. Minter, came on in relief of Chavez to strike out Michael Brantley.

Jose Altuve reached leading off the third when Braves shortstop Dansby Swanson committed his second error of the World Series, and Davidson then walked Michael Brantley.

Jesse Chavez relieved and allowed an RBI double to Carlos Correa. After Yordan Alvarez popped up, Yuli Gurriel tied it at 4 with an RBI groundout. Kyle Tucker walked before Alex Bregman flew out to end the threat.

Freeman drilled a 460-foot no-doubter to right-center against Framber Valdez leading off the bottom of the inning. Fans chanted “Freddie! Freddie!” for the 2020 NL MVP. The homer was his first of the World Series and his sixth career go-ahead homer in the postseason, passing Chipper Jones for most in franchise history.

Valdez got two outs before walking Eddie Rosario, prompting manager Dusty Baker to call for reliever Yimi Garcia. He needed 12 pitches to retire Adam Duvall, who got Atlanta on the board in the first inning with a grand slam.

Alex Bregman and the Houston Astros answered quickly in the second inning, scoring twice to trim their deficit to 4-2 against Atlanta.

AL batting champion Yuli Gurriel singled off surprise starter Tucker Davidson with one out, and Kyle Tucker walked. Bregman drove an RBI double up the right-center alley and spurred on the Houston dugout from second base after a much-needed clutch hit.

Bregman had been 1 for 14 in this World Series with five strikeouts. Houston was hitless in its previous 12 at-bats with runners in scoring position, and 4 for 31 overall.

Valdez, after giving up Adam Duvall’s two-out grand slam in the first, settled down to work a 1-2-3 second with the help of an outstanding defensive play by shortstop Carlos Correa.

Down 3-1 in the best-of-seven Series, the Astros need a comeback win to send this Fall Classic back to Houston for a Game 6 on Tuesday night.

Adam Duvall hit a first-inning grand slam off Framber Valdez, and the Atlanta Braves took a 4-0 lead over the Houston Astros as they tried to finish off the World Series in five games.

Back in the leadoff spot for Atlanta, Jorge Soler reached on a bad-hop single to left leading off. Freddie Freeman flied out and Albies grounded into a forceout.

Austin Riley singled, and when left fielder Yordan Alvarez threw to third even though he had no chance to catch the speedy Albies, Riley continued to second.

Eddie Rosario walked, loading the bases, and Duvall drove a first-pitch 95.4 mph fastball on the low, outside corner to the opposite field.

Right fielder Michael Brantley backtracked but ran out of room, and the ball soared over the 16-foot brick wall in right and into the second row of seats in front of the Chop House restaurant,

It was just the third first-inning slam in Series history, following Elmer Smith in Game 5 in 1920 and Bobby Richardson in Game 3 in 1960.

Valdez was facing the Astros for the second time in the Series after losing the opener.

Rookie Tucker Davidson pitched around a walk to throw a scoreless first inning for the Braves, his first major league action in 4 1/2 months.

Added to the roster on Wednesday after Charlie Morton broke a leg in the opener, Davidson entered with just five major league appearances — the last June 15.

Both teams took batting practice for the first time in Atlanta this weekend, and the sky was clear for World Series Game 5 as the Braves tried to win their first title since 1995.

Tucker Davidson, a 25-year-old left-hander who last pitched in the major leagues in June 15, started Jose Altuve with a called strike. The 138 days since Davidson’s previous appearances were the most for a Series pitcher, topping the 126 days by teammate Kyle Wright before Game 2.

The game-time temperature was 52 degrees. Greg Maddux, a leader of the 1995 Braves, threw out the ceremonial first pitch. Standing well in front of the rubber, Maddux’s offering sailed high.

Atlanta led 3-1 in the best-of-seven Series. Of the 48 previous times a team held a 3-1 lead, 41 went on the win the championship. The last team to overcome a 3-1 deficit was the 2016 Chicago Cubs against the Cleveland Indians, winning Game 5 at home and the final two on the road.

The Houston Astros have reworked their lineup for Game 5, dropping the slumping Alex Bregman from his usual third spot to seventh. Carlos Correa moves into the third slot.

Bregman is 1 for 14 in the World Series, and Houston trails Atlanta three games to one. The Astros have desperate for a big hit this week — they’re hitless in their last 17 at-bats with runners in scoring position.