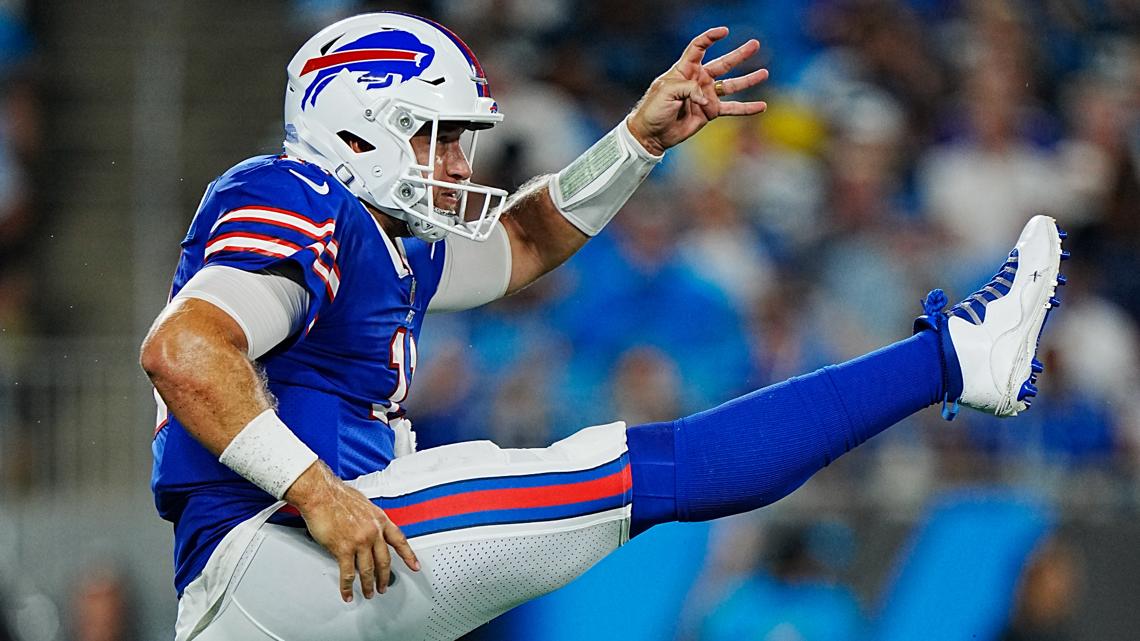 Buffalo Bills rookie punter Matt Araiza, who was accused in a lawsuit Thursday of gang raping a 17-year-old girl when he was at San Diego State last year, did not dress for Friday night’s 21-0 preseason loss to the Carolina Panthers.

Coach Sean McDermott said after the game that it was his call for Araiza to sit, and that the decision was reached on Friday.

McDermott said he learned some new information in the last 24 hours regarding Araiza and that he hadn’t slept much, but declined to go into specifics about what the organization previously knew, how thorough the team’s investigation was, and if he felt Araiza had lied to him and the team.

“I would say there’s been some [new information in the last 24 hours], and I’m not going to deny that, and that’s why I have more work to do on this,” McDermott said. “I’m more trying to be solution-oriented right now. And that’s where I’m headed. And that’s where we need to be headed.”

McDermott said the priority for the team is to “find the truth and do the right thing.”

In a statement released during the game, Araiza said, “The facts of the incident are not what they are portrayed in the lawsuit or in the press. I look forward to quickly setting the record straight.”

Bills push back deadline to finalize new stadium 11h
McDermott said he was aware of Araiza’s statement, but declined to comment on the specifics.

Araiza was not seen on the sideline at any point during Friday’s game or in the locker room afterward, although he did travel with the team to Charlotte, North Carolina. McDermott said Araiza was flying back with the team to Buffalo on Friday night.

McDermott did not comment on whether Araiza would be on the Bills’ roster Tuesday, when teams have to cut rosters to 53 players.

Araiza is the only punter on the team’s roster after the Bills named him the starter with the release of Matt Haack on Monday. Backup quarterback Matt Barkley filled in as the Bills’ punter against Carolina, averaging 40 yards on four kicks, including a 53-yarder.

According to the lawsuit, Araiza, who was 21 at the time, had sex with the then-high school senior, who was under the age of consent in California, outside at an off-campus party held at his residence in the early hours of Oct. 17, 2021. The suit states that Araiza brought her inside a room where at least three other men were located, including the two other men named in the suit — Zavier Leonard, a redshirt freshman with the Aztecs, and Nowlin Ewaliko, who was a freshman last season but is no longer on the listed roster. According to the lawsuit, she was repeatedly raped for about an hour and a half until the party was shut down.

Dan Gilleon, the attorney who filed the civil suit, told ESPN that the Bills were made aware of the allegations as recently as the end of July, when he emailed the team’s representation.

Araiza’s criminal attorney, Kerry Armstrong, told ESPN that his client spoke with the girl at the party but that the rape allegations are “just untrue.”

The Bills released a statement Thursday night stating that they “were recently made aware of a civil complaint involving Matt from October 2021. Due to the serious nature of the complaint, we conducted a thorough examination of this matter. As this is an ongoing civil case, we will have no other comment at this point.”

Armstrong said that Araiza did not tell the Bills about the allegations until after the Los Angeles Times reported in early June that rape allegations against five Aztecs football players had not been investigated by San Diego State. The university said this was based on the San Diego Police Department’s request that the school not take any action in order not to interfere with a police investigation into the incident.

“[I’m] not going to get into who Matt is and his character and all that type of stuff,” McDermott said. “I don’t think that’s right right now. I can tell you this, my heart and thoughts and prayers go out to the people involved. … And that includes Matt, it includes both sides here, and the victim and everyone involved. Our prayers go out to them.”

The NFL on Thursday said it was aware of the incident but declined to comment. Because the alleged rape happened before Araiza was drafted, he would not be subject to the league’s personal conduct policy.

Araiza was selected by the Bills in the sixth round of the 2022 NFL draft in late April after playing three seasons at San Diego State.