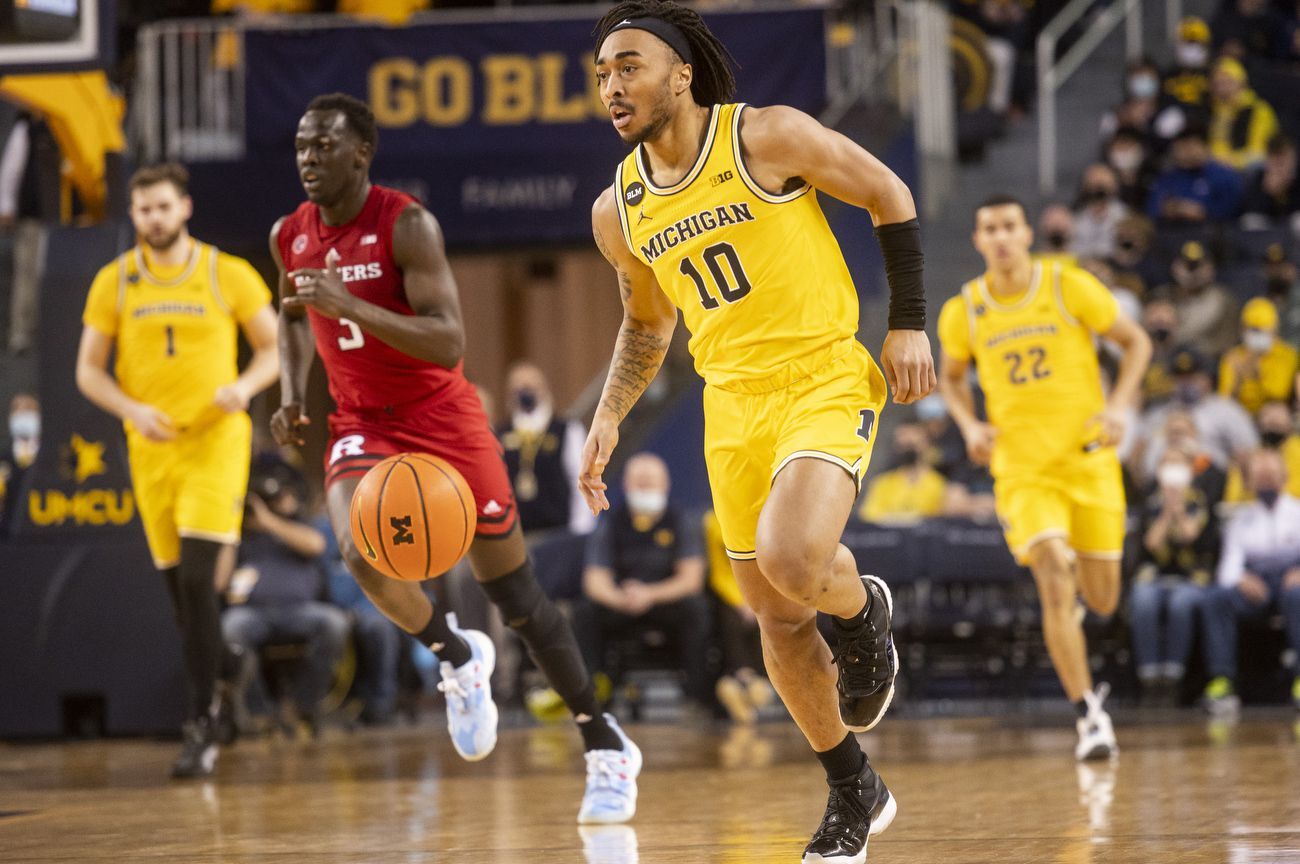 Five Michigan men’s basketball seniors will emerge from Crisler Center’s southeast tunnel, one by one, on Thursday night, accompanied by their parents and/or other family members. At the end of their walks across the court, they’ll be greeted by … someone.

Just not Juwan Howard. Michigan’s head coach is serving a suspension that prevents him from attending games and other team activities, including Thursday’s pregame ceremony.

“It’s going to be tough, it’s going to be a little different situation,” Michigan assistant Howard Eisley said. “But we will make the best of it and do whatever we need to do to send them off right.”

In the postgame handshake line at Wisconsin on Feb. 20, Howard struck an opposing coach in the face. The next day, the Big Ten and Michigan announced he was suspended for five games (the remainder of the regular season). He could not coach the team in games or practice and was banned from all team activities.

It did not mean he had to break off all contact with his coaches and players, and he hasn’t.

Phil Martelli, an assistant filling in as acting head coach, has been in regular communication with his boss. After Michigan’s first game without Howard, point guard DeVante’ Jones said Howard had texted the team a pregame message to stay hungry and focused.

Eisley, who has known Howard since their high school days and considers him a close friend, has reached out regularly. Eisley said their conversations have “been totally non-basketball related.

“More than anything, I’m just checking on him, seeing how he’s doing. Obviously this is a tough time for him. My interest in him is his well being and how he’s managing this tough time.”

So how is Howard doing?

“He’s managing,” Eisley said. “Obviously he wants to be around, so that’s tough on him.”

A couple of players, sophomores Hunter Dickinson and Jace Howard, visited Howard at his home on Tuesday, before the Wolverines hosted Michigan State.

Dickinson joked that he brought along the head coach’s son to make the visit less awkward.

“He gave me some tips, some things to look for,” Dickinson said. “But we were just talking about how we’ve been. That was the main reason to go over and see him — to talk about how he’s doing. I know he’s going a little crazy in the house, not being able to see his guys, because he loves us so much and we love him, so it’s hard for him not to be around us.”

The Wolverines routed Michigan State to make their record 2-1 without Howard. While many, including this writer, assumed Michigan’s results over the final five regular-season games would land on Martelli’s official record, that’s not the case. Michigan has decided that Howard will be credited with the wins and losses.

According to an NCAA policy guide, “If a head coach is suspended for a game or more by the school or conference, he or she is still eligible to receive the wins or losses in his or her absence, but some institutions have chosen to give the record to the interim coach.”

When Louisville suspended Chris Mack for the first six games of this season, the games were credited to his replacement, Mike Pegues. When Tony Benford filled in for Will Wade at LSU at the end of the 2018-19 season, the results went on Wade’s record.

According to a Michigan basketball spokesperson, the program’s results are going on Howard’s record.

On Thursday, Michigan will host Iowa. Tipoff is scheduled for 9:07 p.m. ET with a pregame ceremony starting at 8:35. Michigan will honor Eli Brooks and Jaron Faulds, even though both were celebrated at last year’s ceremony. Brooks took advantage of the NCAA’s COVID-19 waiver to return for a fifth season. Faulds is also in his fifth year of college, though he redshirted one of those years after transferring from Columbia.

Michigan will also honor DeVante’ Jones, a graduate transfer from Coastal Carolina. Jones was not honored at Coastal Carolina last season. His parents won’t be in Ann Arbor on Thursday. His father, Troy, told MLive that Jones will walk on the court with an 11-year-old fan who took a particular liking to Jones upon his arrival at Michigan.

The program will also recognize two traditional four-year players: Adrien Nuñez and Brandon Johns. (You can read more about Nuñez here; Johns did not respond to a text message requesting an interview.) Senior managers Bennett VanSolkema and Jalen Massey will be honored as well.

Whether Martelli will simply replace Howard in the ceremony is unclear — at least it was when Eisley spoke with reporters on Wednesday afternoon.

“To be totally honest with you, we haven’t even had the opportunity to talk about it yet,” Eisley said. “It’s going to be different. It’s going to be tough for our seniors as well as for Coach not to be able to be present and to see them their last home game.”

Howard is the type of coach who cares deeply about his players. Though he left for the NBA before his own Senior Night at Michigan, he’s treasured the two he’s experienced as a coach.

“I will never forget this day right here,” Howard said after last year’s Senior Night, which culminated with a win over Michigan State that clinched a Big Ten title. “It will always be remembered as something special.”