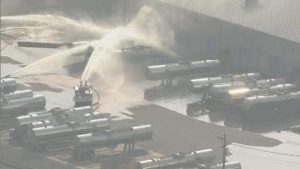 Officials with the Harris County Fire Marshal’s Office said the investigation into the chemical leak is still ongoing and the incident is still a “chemical emergency” that needs to be watched carefully.

A second press conference was held at the La Porte Police Department Wednesday afternoon. Officials said Hydroxyethyl Acrylate is still venting from the tanker trunk and emergency personnel will continue to monitor the situation.

A half-mile radius around the facility is still under an evacuation order.

“Something could happen within that tank, but based on the information they have, that half-mile radius, they are confident that if that occurs, it’s going to occur within that particular area. They have made sure the area is evacuated,” an official with the Harris County Fire Marshal’s office said.

The La Porte Office of Emergency Management issued an evacuation order for some residents after the chemical leak/release from the Dow Chemical facility, located at 13300 Bay Area Blvd. The evacuation order was issued in the event the materials inside the tanker truck caused a fire or explosion.

“If I don’t hear anything in a little bit, I’ll just probably go home and pack something and head somewhere else just to be safe,” neighbor Monica Aleman said.

Aleman said she doesn’t live in the evacuation area but doesn’t want to take any chances. Her father called her at work earlier in the day as the situation was unfolding.

“My daughter was at home so he went and got her and they all evacuated,” she said.

Harris County Judge Lina Hidalgo said the shelter in place order had initially been issued in the event the chemical incident caused any air quality issues that could affect area residents. Harris County’s pollution control department monitored the air consistently and did not identify any dangerous or out-of-the-ordinary readings and so the shelter in place was lifted.

“There is no indication by monitoring data that this event has caused the off-site impact,” a statement read. “However, out of an abundance of caution, employees were evacuated and we continue to work with the Office of Emergency Preparedness on a shelter in place. Thanks to the work of our employees, contract partners, and emergency services there are no injuries associated with this ongoing event. “

The chemical, which has been identified as Hydroxyethyl Acrylate, is usually used in acrylics for coating and adhesives, among other uses, according to Harris County Pollution Control. Hydroxyethyl Acrylate is known to cause irritation of the nose and throat, and contact with the liquid can irritate the eyes and skin.

The Dow Chemical Facility sent two emergency personnel into the facility to conduct thermal assessments of the tanker truck in order to determine whether the reaction is decreasing or whether it’s increasing, Hidalgo said.

The area around the tanker truck is largely industrial. There are two other production facilities within a half-mile radius of the Dow chemical plant. They remain in operation as it would take several days to power down such facilities, Hidalgo said. Several employees remain working at those facilities to ensure they continue to run safely. A handful of homes are situated around the northern part of the perimeter. Those residents were urged to leave, Hidalgo said.

“My office is aware of the ongoing chemical incident in La Porte,” said Menefee in a statement. “We’re in communication with Harris County’s Pollution Control Services Department, who is on scene and investigating the issues. We’re considering all legal options to keep Harris County residents safe.