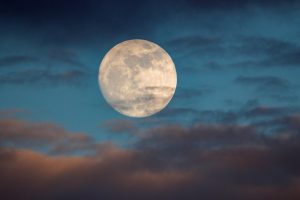 The July full moon, commonly nicknamed the “buck moon” and also known as the “thunder moon,” will be shining in the night sky this weekend. It will be completely full Friday night and Saturday night.

Our long string of supermoons is coming to an end, but the night sky will still be lighting up this weekend as the full July “buck moon” arrives. And some experts say the moon might give off a reddish-orange glow if smoke from the western wildfires continues to drift across the sky.

Here are a few things to know about the July full moon, when to see it and where the nickname originated.

On Tuesday night, the moon was 83% full but it gave off a reddish-orange tint in some areas of New Jersey and New York — and some saw a pinkish color — thanks to smoke and tiny particles that drifted in the upper atmosphere from massive wildfires in the western U.S. and Canada all the way to the eastern U.S.

Weather forecasters believe most of the smoke will be pushed away from the Garden State region by Friday, but it’s possible some smoke could linger. So some say there is a chance Friday night’s full moon could look more red or orange than white.

The Native American Algonquin tribes in what is now the eastern region of the United States nicknamed this full moon the “buck moon,” according to NASA and the Old Farmer’s Almanac, because this time of year is when the new antlers of male deer — bucks — are in their full growth phase.

The Old Farmer’s Almanac and its rival publication, the Farmers’ Almanac, say the July moon is also called the “thunder moon,” because of the frequency of thunderstorms that hit during this hot month. It has also been called the “hay moon.”

Other Native American tribes nicknamed this moon the following, translated directly into English.

After the July full moon finishes its lunar cycle, the next full moon will be glowing in the sky on Sunday, Aug. 22.

The August full moon will be considered a seasonal blue moon — which is the third of four full moons appearing during the same season. In this case, it will be the third full moon of summer, with the fourth one coming on Sept. 20.

Autumn officially arrives in the northern hemisphere this year on Sept. 22.

The August full moon is commonly known as the full “sturgeon moon,” as Native American tribes had learned that the sturgeon fish found in the Great Lakes and Lake Champlain was easiest to catch at this time.

Don’t forget to look for the Perseids — known as one of the best meteor showers of the year. This shower started with sporadic shooting stars on July 17 but it won’t peak until the second week of August, according to the American Meteor Society.

The best view of the Perseids should come on the night of Aug. 11 into the early morning hours of Aug. 12, when the moon will be only 13% full. The American Meteor Society says people in dark rural areas, away from the glow of city lights, usually could see as many as 60 to 75 meteors per hour during the peak period.

Here are the dates and times of each full moon appearing in 2021, along with the most popular nicknames. The times listed here are in the Eastern time zone in the United States.