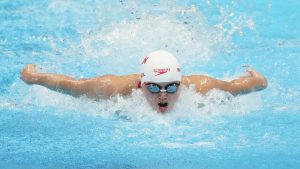 A photo finish for second place in the Olympic women’s 4×100-meter freestyle relay final resulted in rising senior Maggie MacNeil and alumna Catie DeLoof (2016-19) earning their first Olympic medals Sunday morning (July 25) at Tokyo Aquatics Centre. MacNeil and the Canadian relay team edged out Team USA by just three-hundredths of a second for a silver medal, 3:32.78 to 3:32.81. MacNeil, who qualified for the 100-meter butterfly final roughly an hour before the relay final, swam a strong 53.47 on the second leg after not competing in the heats the previous night.

DeLoof did not compete in the relay final but earned a bronze medal thanks to her participation in the heats. She and MacNeil are the Michigan women’s swimming and diving program’s first Olympic medalists since 2000, when incoming freshman Samantha Arsenault (2001-02) won gold with Team USA in the 4×200-meter relay in Sydney, Australia.

In her signature event, MacNeil finished third in her 100-meter butterfly semifinal in 56.56 and qualified sixth overall for the eight-person final. The London, Ontario, native will take part in the final at 9:30 p.m. EDT Sunday, July 25 (10:30 a.m. Monday in Tokyo), swimming in lane seven.

Former Wolverine Felix Auböck (Austria) and rising sophomore Jake Mitchell (USA) were in action Sunday morning (July 25) at Tokyo Aquatics Centre in the men’s 400-meter freestyle final and placed fourth and eighth, respectively. Auböck finished with a 3:44.07 in the final, tying for fourth place and missing a medal by just two one-hundredths of a second. Mitchell, who surprised many by making the 400-meter final, finished two seconds behind the gold medalist with a 3:45.39. He fell .01 off from his personal best, which he set in heats the previous night.

Former Wolverine Amanda Chidester delivered a two-run, walk-off single in the bottom of the eighth inning to propel the United States to a 2-1 win over Australia. The win improved Team USA to 4-0 with a game remaining in opening-round play and clinched its berth in the gold-medal game. Australia used a bases-loaded walk to break through in the top of the eighth, but Team USA moved quickly to threaten in the home half, putting two in scoring position via the international tiebreaker, an infield single and a sacrifice bunt. Chidester connected with the first pitch in the next at-bat and hit a hard bouncer to left-center to score both baserunners. It was the second time in three games that Chidester drove in the winning run. Monica Abbott tossed a complete-game gem from the circle, striking out 13 while giving up one run — the first allowed by Team USA in four games — on three hits and six walks.

In his Olympic debut, Moritz Wagner scored 12 points, grabbed four rebounds and went 6-for-7 from the foul line, but the German National Team could not hold off a late fourth-quarter rally from Italy, dropping its Group B opener 92-82 at Saitama Super Arena. Getting off to a strong start, the Germans closed the first quarter with a 10-point cushion, 32-22. However, the Italians rallied in the second, holding Germany scoreless for nearly six minutes to tie the game, 43-43, with a minute left. A half-closing three-pointer — with 11 seconds left — helped give Wagner’s squad a small three-point lead, 46-43, at the break.

An opening 11-5 spurt over the first three minutes of the third quarter helped Germany extend its lead to nine, 57-48. However, Italy rallied again and reclaimed its first lead since five minutes into the contest, 63-62, with three minutes left in the period. A closing fourth-quarter 12-0 Italian run helped them overcome a two-point deficit and pull away for the win. While both teams made 15 three-pointers, Italy took advantage of Germany’s mistakes, scoring 16 points off turnovers compared to just two for the German squad.

The rowing events continued with additional qualifying, including repechages, on Sunday morning (July 25) local time at the SeaForest Waterway in Tokyo, Japan. The quad sculls (4x) repechage featured former Wolverine Ellen Tomek with spots in the A final on the line. Tomek and teammates Cicely Madden (Brown), Meghan O’Leary (Virginia) and Alie Rusher (Stanford) were unable to secure the top-two finish needed to advance to the A final, placing sixth in 6:50.74. The advancing boats were Australia (6:36.67) and Italy (6:37.44). The USA boat will row in the B final, which has been rescheduled for 8 p.m. EDT Tuesday, July 27 (9 a.m. Wednesday in Tokyo).

The continued heats and repechages included the women’s four (4-) and Grace Luczak competing in the repechage, which was moved up a day due to the forecast. Seeking a bid to the A final, Luczak and teammates Kendall Chase (California), Claire Collins (Princeton) and Madeleine Wanamaker (Wisconsin) needed a top-two finish to advance. The U.S. team ended up placing fifth in 6:53.26. The winner was Great Britain (6:46.20), followed by Poland (6:46.57). Romania, Canada, and Denmark will join the U.S. in the B final, set for 7:30 p.m. EDT Tuesday, July 27 (8:30 a.m. Wednesday in Tokyo).