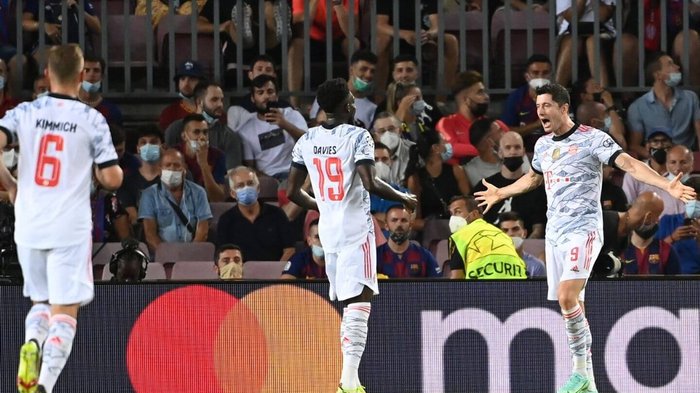 Bayern Munich kicked off their Champions League campaign with another convincing victory over Barcelona — this time a 3-0 win at the Nou Camp.

In a game Bayern dominated, reminiscent of the 8-2 win in this competition two seasons ago, the Germans looked the stronger side from the start. It came as no surprise when they took the lead in the 34th minute through a deflected shot by Thomas Muller.

The visitors continued to dominate possession in the second-half. Robert Lewandowski scored his first of the evening in the 56th minute with a left-footed shot inside the box.

With five minutes remaining, Lewandowski scored his second of the match to help seal the deal for Bayern. Serge Gnabry’s shot hit the post and the rebound fell to the Polish international to slot past Marc-Andre ter Stegen.

A disappointing showing from Barcelona makes it their first opening group game loss in 24 years.

Well, what an exciting evening it has been, who doesn’t love European football!? In case you missed the other matches, here is a round-up of all the results:

Julian Nagelsmann is happy with his team’s performance

Bayern Munich manager Nagelsmann spoke briefly on his team’s performance. He said: “I’m happy. But when I look back at the game, when I analyze it, I can’t drown in joy. We could have been better.”

Bayern had an impressive 17 shots, seven of which were on target. Nagelsmann’s team were not tested much, with Barcelona failing to register a shot on target.

The scoreline wasn’t as big as the 8-2 win Bayern had over Barcelona two seasons ago, but Nagelsmann will want his team to be move clinical in the final third if they are to win the Champions League.

Muller pleased with the win

Thomas Muller scored the opening goal tonight and he was in a joyous mood after the game.

The German international said: “We didn’t allow them much at the back. Going forward, we could have scored one or two more. It’s a lot of fun playing here, the boys enjoyed it. When you win 3-0 here, it’s a really important signal. We’re really pleased.”

Koeman reacts to the defeat

The Barcelona manager was frustrated but honest after the 3-0 home defeat tonight. He said: “I’m disappointed, we lost 3-0. But if you are being realistic.. this can happen. We have problems up front and are limited in our options. This is the best we could offer.

“I can’t say anything about the team’s attitude. We have the squad we have and very young players. But in two or three years they will be very good.”

Gerard Pique has been reacting to his side’s heavy defeat tonight. The defender said: “We competed in the first half, Bayern took the lead with a deflected goal. In the end, I don’t know how many kids we had on. It is what it is, we are what we are.”

Tonight was the first time Barcelona went the whole night without a single shot on target in the Champions League since the 2003-04 campaign.

85 mins – Barcelona 0-3 Bayern Munich: Who else but Lewandowski? Coman picks out Gnabry but his shot comes off the post. The ball falls to Lewandowski and he smashes home his second of the night.

It’s another heavy thumping for Barcelona by Bayern Munich who beat them 8-2 two seasons ago.

70 mins – Barcelona 0-2 Bayern Munich: For the home side, Mingueza comes on for Garcia. The former Manchester City defender has endured a difficult evening against an ever-present Bayern attack.

What a strong bench Bayern have. The impressive Musiala comes off to make way for Gnabry.

Substitutions for both sides

68 mins – Barcelona 0-2 Bayern Munich: Coutinho comes in for Luuk de Jong. A few minutes earlier, Roberto and Buqeuets made way for Demir and Gaviria. Can they help Barcelona climb back into this game?

For Bayern – just the one change as Hernendez comes in for Pavard in defence.

56 mins – Barcelona 0-2 Bayern Munich: Musiala releases a powerful shot but it strikes the post and Lewandowski is there to tap it in for his 74th Champions League goal.

Barcelona have looked lacklustre and if they are not careful, this could end-up being embarrassing.

Brilliant save by Ter Stegen

52 mins – Barcelona 0-1 Bayern Munich: Bayern get in-behind yet again. Lewandowski back-heels it to Sane and his shot from close-range is saved well by Ter Stegen’s right foot. The hosts are holding on at the moment and a second goal for Bayern looks inevitable.

Barcelona 0-1 Bayern Munich: We are back underway at the Nou Camp. Barcelona will have to step it up a gear or two after failing to get a shot on target in the first-half.

They will be aware of the counter-attacking threat Bayern pose when going forward.

Barcelona 0-1 Bayern Munich: Thomas Muller’s heavily deflected shot is the difference as we head into the interval. The hosts have dominated and deserve the lead.

Barcelona are lacking inspiration in-front of a quiet home crowd. Bayern are dealing with Memphis’ threat well but Luuk de Jong has been involved more and looks the likelier player to get on the score-sheet.

The team-sheets are out and this is how both teams will line-up tonight: