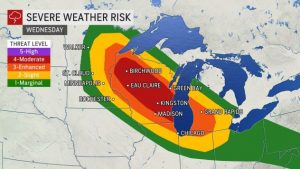 Forecast models suggest a complex of strong to severe storms will erupt in northwest Wisconsin around 8 or 9 p.m. local time before sweeping southeast across the state, reaching Green Bay around midnight and Madison and Milwaukee with a few hours after that. During the predawn hours Thursday, the storms are projected to barrel across the southern half of Michigan arriving in northern Ohio by sunrise. Chicago is still forecast to be right on the periphery of the storm complex and it’s not clear whether it will be clipped or missed overnight.

In anticipation of the storm, scheduled events at the AirVenture air show in Oshkosh, Wis., where tens of thousands of people have gathered (mentioned below), have been cancelled.

Parts of the Upper Midwest and Great Lakes region are bracing for potentially destructive wind gusts ahead of an anticipated line of severe thunderstorms expected to develop Wednesday evening. Meteorologists are concerned that storms may congeal into a high-impact windstorm known as a derecho, with the possibility of hurricane-force winds; large, damaging hail, and a few tornadoes.

The National Weather Service Storm Prediction Center has issued a Level 4 out of 5 risk of severe weather for parts of Wisconsin, including Milwaukee. Green Bay and Madison in Wisconsin; Chicago; South Bend, Ind., and Grand Rapids, Mich., are in an “enhanced” Level 3 out of 5 risk for severe storms.

Derecho season is underway. Here’s what that means.

A few remnant storms may even make it to the East Coast on Thursday, eyeing the Mid-Atlantic with the potential for localized strong winds.

Gusty thunderstorms were rolling east across the Minnesota-Wisconsin border during predawn hours Wednesday, marking some elevated instability, or energy for upward motion at the mid levels of the atmosphere. A few storms were towering as high as 55,000 feet at 4 a.m. Central time as they dropped half-dollar-size hail. That’s a surefire sign of an active day of severe weather ahead as the atmosphere warms and becomes even more unstable.

Fueling the storms is prolific heat and humidity, with temperatures across the northern Plains and Upper Midwest hovering in the upper 90s to near 100 degrees. Heat advisories and excessive-heat warnings are in effect for 14 states from the Gulf Coast to the Corn Belt and the High Plains. In Minnesota, high dew points, a measure of humidity, will help conditions feel as hot as 110 degrees.

“The combination of hot temperatures and high humidity will combine to create a dangerous situation in which heat illnesses are likely,” warned the Weather Service in the Twin Cities.

The exceptionally sultry conditions, stemming from a sprawling heat dome stretching across much of the Lower 48, will also supercharge the atmosphere, creating an environment ripe for widespread significant thunderstorms. They will roll southeast along a diffused temperature boundary that separates warm, moist air to the south from cooler air banked to the north over Manitoba and Saskatchewan. A strong jet stream slicing overhead will offer storms plenty of wind energy to work with.

Storms are expected to erupt near the Minnesota-Canadian border during the early afternoon hours. A few of the initial cells may be lone and discrete rotating storms known as supercells. Any supercells that develop will be capable of producing hail the size of tennis balls or larger, as well as damaging winds and a few tornadoes.

Eventually, storms will expand into one or more bowing clusters during the evening hours, as the risk transitions to primarily damaging winds and isolated tornadoes. Widespread winds of 60 to 75 mph are expected, with sporadic bursts of 80 mph gusts likely.

It’s probable the storms will move from the Interstate 94 corridor between Minneapolis and Eau Claire, Wis., southeastward toward Madison and Green Bay.

Model forecasts indicate the storm complex may form in northwest Wisconsin by around 7 p.m. local time, sweep through Green Bay, Madison and Milwaukee within an hour or two of midnight.

A wild card at this point is how far east they rumble. Some computer models may be overexuberant than realistic in their portrayal of warm, moist air surging farther northward; subsequently, the squall line or arcing “bow echo” may not slip as far east as currently projected. That’s why the threat may sneakily ramp up in Chicago depending on how conditions evolve. Some models have the storm complex missing Chicago to the east or plunging more to the south and directly impacting the city.

A particular concern is that the storms may impact more than 40,000 people camped out near Oshkosh, Wis., for the Experimental Aircraft Association (EAA) Air Show, known as AirVenture, which runs through Sunday. The National Weather Service is providing support for the event and working with EAA to help direct people to safety with sufficient lead time if severe weather threatens.

The storms are likely to last through the overnight, sweeping across Lake Michigan and plowing through southern Michigan and parts of Indiana and Ohio by early Thursday morning when they should weaken.

Derechos aren’t unusual across the central United States, although once a decade or so they rival the destructive potential of major hurricane eyewalls. A catastrophic derecho tore through central Iowa last August, bringing 140 mph gusts to Cedar Rapids and crippling the community for weeks

Large thunderstorm complexes like the one forecast Wednesday, referred to as mesoscale convective systems, often rage overnight before dissipating during the early-morning hours as the sun rises. But it’s increasingly probable storms will redevelop from west to east along the sagging cold around midday Thursday, stretching along and south of Interstate 70 from Pittsburgh to Columbus to Indianapolis and possibly as far west as St. Louis.

Those storms will rumble through parts of the Ohio Valley and Mid-Atlantic on Thursday afternoon, probably with a few additional bouts of severe weather. Locally damaging winds and an isolated tornado or two are possible.