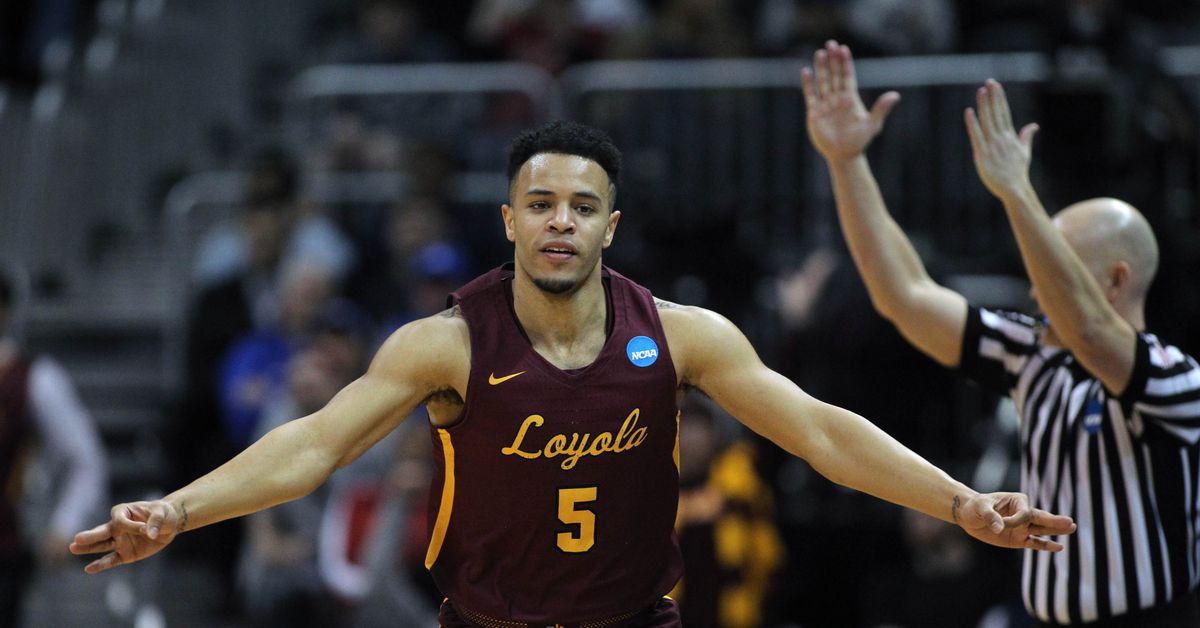 Forty-five years after winning its first and only Division I men’s basketball national championship – and with a soon-to-be celebrity nun who became a household name overnight – Loyola Chicago made a Cinderella run to the Final Four in 2018, thanks to three consecutive late-game, game-winning jump shots that propelled the 11th-seeded Ramblers to the sport’s final weekend.

As we go inside the NCAA Video Vault, I analyzed all three of Loyola Chicago’s game-winners during its four-game run to the Final Four.

There’s a reason that scoreboards on TV, online and mobile apps sometimes refer to Loyola Chicago as “Loyola (IL).” Loyola University Maryland, or “Loyola (MD),” also competes at the DI level, and in the history of the sport, it hasn’t been unusual for there to be roughly a decade, or more, in between when either school has made the NCAA men’s basketball tournament.

After making the first-ever 64-team NCAA tournament in 1985, the Chicago-based Ramblers didn’t qualify again for the Big Dance until 2018. The Baltimore-based Greyhounds have made the NCAA tournament just twice, in 1994 and 2012.

All of that is to say that Loyola Chicago burst onto the national men’s basketball scene in 2018, as seen by the need to specify just which Loyola program it was. In the 2018 season, the Ramblers were led by coach Porter Moser, then in his seventh year as the school’s head coach, and they were in their fifth season competing in the Missouri Valley Conference after transitioning from the Horizon League.

Other than a 24-13 campaign in the 2015 season, Loyola Chicago had never won more than 18 games in any of Moser’s first six seasons, but that changed in 2018, thanks to a roster that featured seniors Donte Ingram, Ben Richardson and Aundre Jackson, transfers Clayton Custer (a fourth-year junior who spent his freshman season at Iowa State) and Marques Townes (another fourth-year junior who played at Fairleigh Dickinson for his first two years of college), and complementary freshmen Cameron Krutwig and Lucas Williamson.

Those Ramblers tore through the Missouri Valley, winning the league’s regular-season title with a 15-3 conference record before taking home the conference tournament title, too. That, plus a 10-2 non-conference record that included a road win over then-No. 5 Florida, earned Loyola Chicago a No. 11 seed in the 2018 NCAA Tournament.

Who made the shot: Donte Ingram

How much time was left when the shot was attempted: 1.6 seconds

What could have gone wrong: Well, almost everything. Miami’s Lonnie Walker IV, a 75-percent free throw shooter on the season, stepped to the free throw line for a one-and-one with 9.3 seconds left, as Miami led 62-61. If he had made both free throws, the best case for Loyola Chicago likely would’ve been forcing overtime. Instead, he missed the first free throw attempt. It was actually a solid free throw attempt that somehow rimmed out after six or seven bounces on the rim.

Loyola Chicago’s Ingram was positioned on the lower block for the free throw, where the ball fell. He actually jumped a little too early and was unable to grab the rebound, and the ball was deflected as he and Miami’s Sam Waardenburg fought for the rebound. Ben Richardson came down with the rebound and he passed to Townes, who pushed the ball across halfcourt. He ran into a double team from Miami’s Ja’Quan Newton and Walker. Had he continued dribbling, he could have gotten trapped, possibly resulting in a turnover or a forcing a bad shot.

Townes passed the ball back to Ingram, who caught it while standing on the March Madness logo at halfcourt. He immediately fired a 3-pointer from about 26 feet away from the rim, which is never a high-percentage shot at the college level, especially in a pressure-packed end-of-game situation.

What Donte Ingram said in the postgame press conference: “It was a great feeling. I thank Marques for making that pass. Any one of us could have hit that shot, but I was just fortunate enough to be in the position. And when I seen the shot and I had space, I was confident, and it went in, luckily.”

Who made the shot: Clayton Custer

How much time was left when the shot was attempted: 6.0 seconds

What could have gone wrong: Almost any other bounce on Custer’s jumper could have ended the Ramblers’ season. Similar to how Loyola Chicago got a friendly bounce, or five, on Lonnie Walker IV’s free throw attempt in the first round, the Ramblers benefited from a shooter’s touch to knock off Tennessee. Custer’s shot was far from a great look – it was an off-balance jumper against solid defense and he was never truly squared towards the basket.

Perhaps the most dangerous part of Custer’s game-winner was that it left 3.6 seconds on the clock for Tennessee, which was more than enough time for the Volunteers to get down the floor and get off a decent look. Tennessee’s Jordan Bone was able to catch the ball near midcourt, take three dribbles and attempt a 3-pointer before the final buzzer sounded. Townes and Richardson were both in the area to put pressure on Bone but all in all, it was about as good of a look as Tennessee could have imagined. Bone, a 38 percent 3-point shooter, missed off the back of the rim.

What Clayton Custer said in the postgame press conference: “The ball bounced up on the rim, and I got a good bounce like that. But the only thing I could think about after the game is that that’s all the hard work that I put — like that you put in to get in a situation like this, and all those hours, those waking up early in the morning and working out. For all that hard work to come up to that lucky bounce is worth it, and I think all the hard work, the basketball gods helped that one go in, and I’m just super blessed to be in this situation right now.”

Who made the shot: Marques Townes

How much time was left when the shot was attempted: 8.0 seconds

What could have gone wrong: If Custer had tried to take another game-winning shot, electing to drive to the rim instead of passing to Townes, he would have been trapped between Cody and Caleb Martin, who are both much bigger than him – listed at 6-7, 205 pounds. Or, if Townes hadn’t shot faked and instead rushed a 3-pointer with Caleb Martin flying at him, he could have missed.

The game wasn’t over when Townes made the 3-pointer. There were still 6.2 seconds left and Caleb Martin hit a 3-pointer to cut Loyola Chicago’s lead to one. The Ramblers could have choked in the final seconds and committed a costly turnover, allowing Nevada to attempt a game-winner of their own.

What Marques Townes said in the postgame press conference: “I’ll probably remember it for the rest of my life. I mean, it doesn’t really get any better than that. Clay made a great play, got downhill, kicked me to the corner. The guy came flying at me, I just gave him a little shot fake, and I shot it, and it went in. It was just – that’s something you dream about. You’re in the Sweet 16 and you hit a big shot like that. It’s just amazing. I’m just blessed to be in that position.”

Here’s what the Ramblers’ heroics resulted in
I was in the arena when, after three consecutive nail-biting finishes, No. 11 seed Loyola Chicago then coasted to defeat No. 9 seed Kansas State 78-62 to advance to the program’s first Final Four since it won the 1963 national championship.

Here’s what I witnessed, in a collection of scenes that only March Madness can produce.

Moser, the 14-year veteran head coach who’s coaching in his first NCAA tournament, also turned to the Loyola Chicago faithful, desperately needing someone to pinch him to prove that, yes, this really happened.

As Loyola Chicago’s coaching staff, then the entire Moser family, posed with the South Regional trophy, players Aundre Jackson, Donte Ingram, Adarius Avery, and Cameron Satterwhite gathered on the makeshift podium that was set up on the court and they tried to create the perfect celebratory Instagram picture.

One at a time, they held and kissed the trophy while the other players picked up handfuls of confetti that had fallen and threw it in the air to let it slowly flutter to the ground once again. Because while they’ve gone from the Missouri Valley Conference champs to arguably the biggest story in sports in a matter of two weeks, the Ramblers, just like anyone else, can’t pass up the chance to share their latest achievement on social media.