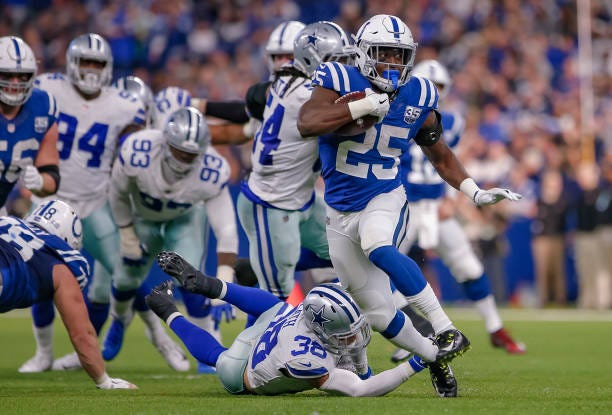 The Cowboys moved to 9-3 on the season after handling the Colts on Sunday night, 54-19.

The Indianapolis Colts were in this game at the start of the quarter, believe it or not. They end up with 5 turnovers, 4 in the fourth period.

Matt Ryan goes 21-of-37 for 233 yards, 2 touchdowns and 3 interceptions. Jonathan Taylor was having a good game until the Colts had to start throwing every down. He has 82 rushing yards and 21 receiving yards.

Alec Pierce has 4 catches for 86 yards and a touchdown.

Dak Prescott goes 20-of-30 for 170 yards and 3 touchdowns and 1 interception. Michael Gallup has 2 TDs. Tony Pollard rushes for 2 TDs and the Cowboys rush for 191 yards. CeeDee Lamb has 7 touches for 94 yards and a TD.

Why the Cowboys won

As we continue to look at Dallas as a Super Bowl threat, the main reason is centered around their defense. That was on full display in the fourth quarter where the Cowboys slammed the door completely shut on the Colts possibly pulling off the upset. After allowing a 15-play touchdown drive that traveled 90 yards and brought Indy within two points of knotting the score, Dan Quinn’s defense flipped a switch. the offense gave them some cushion as they went on a 75-yard touchdown drive of their own, to extend the lead to nine but they didn’t need it. The fourth quarter was a defensive avalanche that featured four consecutive turnovers, including a scoop and score by Malik Hooker. Even when the defense wasn’t scoring on their own, they were setting up the offense to cash in, which they did after each of the following three turnovers. That resulted in a 33-0 fourth quarter run that allowed Dallas to cruise to its ninth win.

Those 33 points are tied for second-most points any team has scored in the fourth quarter of a game in NFL history.

Naturally, the defense is going to be the main story coming out of this game, but the running game did have its moments as well. As a team, Dallas rushed for 220 yards and four touchdowns. That was largely spearheaded by Tony Pollard — who got the start on Sunday night even with a healthy Ezekiel Elliott on the roster — as he totaled 91 yards and two touchdowns on the ground.

CeeDee Lamb was also a difference-maker in the passing game. Not only did he find the end zone and lead the team in receiving, but as Dallas continued to put him in motion, he freed up others to make impact plays as well. A great example of that came on Michael Gallup’s first touchdown on the day in the second quarter. Lamb motioned out left, which forced Stephon Gilmore — who was originally covering Gallup — to remain on the outside. Gallup worked the middle of the field and eventually connected with Prescott who was rolling out to the right for the score.

Why the Colts lost

Indianapolis did seem to give the Cowboys its best punch, but it just wasn’t strong enough to make a lasting impact. They initially took advantage of some short fields and build a slim lead early, but the offensive line started to allow the Dallas front to get home late in the first half. After jumping out to a 10-7 lead, Matt Ryan was sacked on back-to-back possessions on third down and forced Indy to put the ball away. Then, they were held to just a field goal, despite defense picking off Prescott and immediately putting the offense inside the red zone. Ryan also tossed a pick with a minute to go before halftime, which was plenty of time for Dallas to go on another touchdown run.

Those four possessions in the first half after their initial touchdown was the time for Indy to plan their flag into the ground and put Dallas on upset alert, but they only managed to produce three points over that stretch. With the talent discrepancy as wide as it is between these two teams, the Colts needed to play perfect and take advantage of those opportunities when they are there for the picking.

Of course, the second-half collapse that featured four-consecutive turnovers will put any team in a coffin. That also continued a rough trend for Indianapolis in the fourth quarter. Coming into Week 13, the Colts had a -19 point differential in the fourth quarter of its last two games. Getting outscored 33-0 over the final quarter won’t exactly help those figures.

From here, Dallas will hang around AT&T Stadium and await the Houston Texans for a Week 14 showdown on Sunday.

As for the Colts, they’ll be on the bye in Week 14 before going on the road to face the Vikings in Minnesota in Week 15 to begin the final leg of the 2022 regular season.