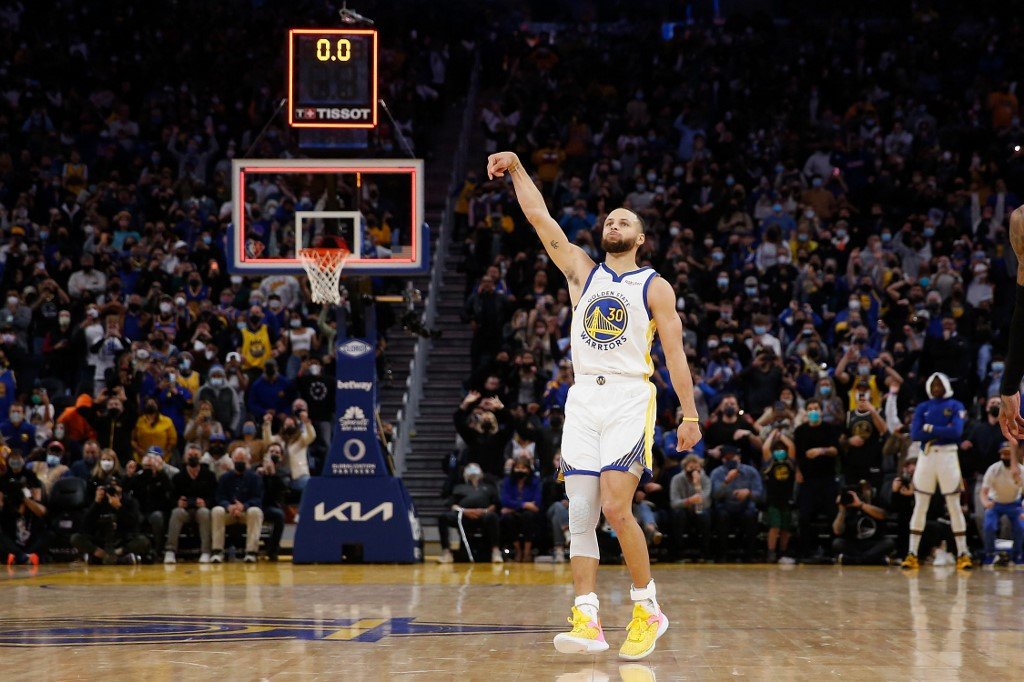 Stephen Curry hit a game-winning 20-foot jumper from the top of the key to beat the final buzzer, scoring 22 points and sending the Golden State Warriors past the Houston Rockets 105-103 on Friday night. The sellout crowd went into a frenzy, confetti fell and Curry pumped his arms while dancing at midcourt — exhaling after he had missed two 3-pointers in the final 1:48. It was the first buzzer-beating winning shot of Curry’s career. Curry overcame a slow start to lift the tired, mentally spent Warriors back up from an ugly loss to Indiana a night earlier. He also dished out 12 assists. Houston had the ball with 11.5 seconds left and the game tied at 103, but Garrison Mathews missed a 3 and Otto Porter Jr. secured the rebound before a Warriors timeout. Curry shot 6 for 21 with four 3s. Andrew Wiggins added 17 points for the Warriors following a 121-117 overtime loss to the undermanned Pacers on Thursday night.

Christian Wood had 12 of his 19 points in the first quarter and grabbed 15 rebounds and Kevin Porter Jr. scored 17 points for Houston, which wrapped up a five-game road trip.NETS 117, SPURS 102 SAN ANTONIO (AP) — James Harden had 37 points, 11 assists and 10 rebounds, spoiling Dejounte Murray’s ninth triple-double of the season as Brooklyn overpowered San Antonio. Murray had 25 points, 12 rebounds and 10 assists for his second straight triple-double and 13th of his career, one shy of David Robinson’s franchise record. Harden’s triple-double was his 66th, which is eighth on the all-time list. Kyrie Irving scored 24 points and LaMarcus Aldridge added 16 for the Nets, who are missing star Kevin Durant because of a knee injury. Brooklyn’s fifth straight victory over San Antonio marked a successful homecoming for Aldridge and Patty Mills. Both were honored with video tributes and received loud ovations during introductions. Aldridge finished with 16 points and Mills had nine.

ORLANDO, Fla. (AP) — LeBron James scored 29 points and played exclusively at center in the second half as Los Angeles rallied from an eight-point halftime deficit. Los Angeles coach Frank Vogel replaced starting center Dwight Howard with James to start the second half, and the Lakers opened the third quarter on a 20-2 run. They outscored Orlando 31-16 in the third, making 13 of 23 shots and 5 of 8 3-pointers in the frame. Carmelo Anthony scored 19 of his 23 points in the second half and hit four 3-pointers, while Stanley Johnson added 11 points off the bench. It was the eighth time the 37-year-old Anthony scored at least 20 points this season. One game after being benched in the fourth quarter of Wednesday’s loss to Indiana, Russell Westbrook had 18 points, 11 rebounds and seven assists. When Westbrook fed James for an alley-oop in the fourth, chants of “M-V-P” broke out for James among the crowd.

Rookie guard Jalen Suggs scored a career-best 22 points for the Magic, while Wendell Carter Jr. added 19 points. Mo Bamba, who scored a career-best 32 points on Wednesday, had 11 points and eight rebounds Friday. BUCKS 94, BULLS 90 MILWAUKEE (AP) — Giannis Antetokounmpo had 30 points and 12 rebounds to help the Bucks overcome Grayson Allen’s ejection. Chicago’s DeMar DeRozan scored 35 points, but missed a 3-pointer that would have put the Bulls ahead with 23 seconds left. Milwaukee’s Khris Middleton made two free throws with 15.8 seconds remaining to close out the scoring. Both teams posted their lowest 3-point percentages of the season. The Bulls shot 18.4% (7 of 38) from beyond the arc and the Bucks made 19.4% (6 of 31) of their attempts.

Allen was ejected midway through the third quarter for a flagrant foul 2 against Alex Caruso, who was driving to the basket. The play was originally ruled a common shooting foul but got upgraded to a flagrant 2 after a replay review. Caruso landed on his right side and remained on the floor under the basket for a couple of minutes. He stayed in the game to attempt his free throws, though he missed both tries. The Bulls were playing their first game since announcing Thursday that guard Lonzo Ball needs arthroscopic surgery on his left knee. Ball averages 13 points, 5.4 rebounds and 5.1 assists. GRIZZLIES 122, NUGGETS 118 DENVER (AP) — Ja Morant scored 38 points and Memphis overcame Nikola Jokic’s fourth straight triple-double to beat Denver. Morant scored on floaters, runners, fadeaways, 3-pointers, an emphatic alley-oop and driving layups while slicing through a variety of Nuggets defenders. He set a career high with 23 points in the first half and finished 15 of 26 from the field. Morant was six points shy of his career high and also had six rebounds and six assists.

Jaren Jackson Jr. added 20 points, including a 3-pointer on a feed from Morant with 41 seconds left after the Nuggets got within 115-111. De’Anthony Melton had 21 points and nine rebounds off the bench as the Grizzlies won for the second time in four games since snapping their 11-game winning streak. Two days after his 49-point triple-double in an overtime victory over the Los Angeles Clippers, Jokic had 26 points, 11 rebounds and 12 assists. It was his NBA-best 11th triple-double of the season and 68th of his career. Will Barton had 27 points and eight assists. TRAIL BLAZERS 109, CELTICS 105 BOSTON (AP) — Jusuf Nurkic grabbed an offensive rebound and hit a shot from the lane with 14 seconds left and Portland rallied past Boston. Nurkic had 29 points and 17 rebounds — none bigger than his board after Jayson Tatum gave Boston a 104-103 lead with two free throws with 26.8 seconds to go. Anfernee Simons missed at the other end, and Nurkic grabbed the ball and softly put it in from a few feet out. The Blazers sealed the victory at the foul line.

CJ McCollum scored 24 points and Simons had 21 for Portland, which trailed by 11 midway through the fourth quarter and won for just the fifth time on the road. Tatum led Boston with 27 points, 10 rebounds and seven assists. Jaylen Brown added 22 points and Robert Williams III pulled down 10 rebounds. The Celtics couldn’t close out Portland in the fourth quarter and lost their second straight. HAWKS 110, HEAT 108 ATLANTA (AP) — Trae Young scored 28 points, Kevin Huerter added 21 and the Atlanta Hawks won their third straight game after nearly blowing an 18-point lead. Miami was again without star guard Kyle Lowry, who missed his third straight game for personal reasons, and Tyler Herro, the sixth man who’s averaging 20.7 points per game and was sidelined in health and safety protocols for the second game in a row. Neither made the trip.

Bam Adebayo finished with 21 points and Duncan Robinson had 19 for Miami, which had won six of seven and was 15-5 since beating Milwaukee on Dec. 8. The Heat, who didn’t lead after the 30-second mark of the first quarter. The Hawks have won three straight at home after losing 10 in a row at State Farm Arena. Atlanta is 12th in the East. CLIPPERS 102, 76ERS 101 PHILADELPHIA (AP) — Reggie Jackson scored 19 points, including two free throws with 18.2 seconds remaining and Los Angeles rallied from a 24-point second-half deficit. Nicolas Batum had 15 points, seven rebounds and a key steal late in the game for the Clippers. Los Angeles, playing the second of an eight-game, 13-day trip, won for the second time in its last five games.

Joel Embiid, who tied his career high with 50 points Monday night, had 40 points, 13 rebounds and six assists. Tobias Harris added 20 points and Tyrese Maxey had 19 points and eight assists for Philadelphia, which lost for the third time in its last 12. HORNETS 121, THUNDER 98 CHARLOTTE, N.C. (AP) — Terry Rozier scored 24 points, Miles Bridges added 22 points and 14 rebounds, and Charlotte defeated Oklahoma City. P.J. Washington scored 20 and Gordon Hayward 16 for Charlotte, which has won seven of eight. LaMelo Ball finished with 10 points for the Hornets. Shai Gilgeous-Alexander led the Thunder with 29 points, but was held to four in the second half. Josh Giddey added 21 and Jeremiah Robinson-Earl notched a double-double with 12 points and 11 rebounds.

After Oklahoma City cut Charlotte’s lead to 82-73 on Robinson-Earl’s 3-pointer with 4:06 to play in the third, Charlotte pushed its lead to a game-high 25 on a 3-pointer by Bridges. RAPTORS 109, WIZARDS 105 WASHINGTON (AP) — Fred VanVleet hit a tiebreaking 3-pointer with 59 seconds to play, and Toronto Raptors hung on after blowing an 18-point fourth-quarter lead. Rookie Scottie Barnes scored a career-high 27 points, VanVleet had 21 points and 12 assists, and Pascal Siakam also scored 21 points for Toronto, which went 2-3 on a five-game trip. Bradley Beal led Washington with 25 points. He also had eight assists, but committed nine turnovers, equaling his career high. The Wizards, who began the season 10-3, are 13-20 since.

The Pistons rallied from two separate 10-point deficits and cut Utah’s lead to one at 95-94 on a floater from Josh Jackson midway through the fourth quarter. Gobert scored back-to-back baskets to prevent Detroit from overtaking the Jazz and pushed the lead back to six at 100-94 with 5:30 le