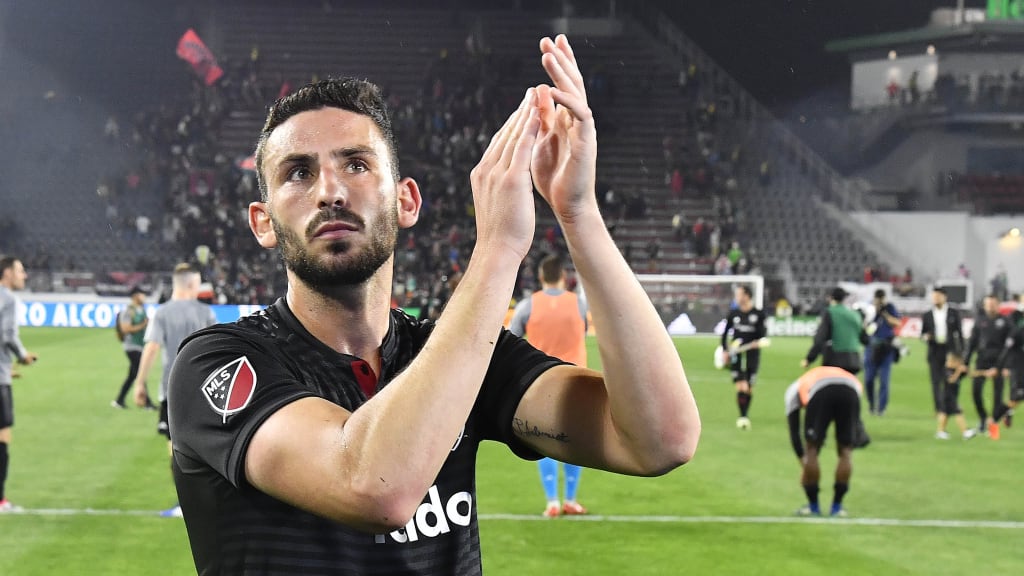 If the mission Tuesday was not difficult enough — MLS’s worst traveling across the continent to play MLS’s best with two days’ preparation — D.C. United’s task grew infinitely greater when it lost captain Steven Birnbaum to a red card early in the second half.

To that point, United had acquitted itself as well as could be expected from a last-place team still adjusting to new players, dousing high-charged Los Angeles FC and creating the better scoring chances.

But shortly after Birnbaum marched to the locker room, United’s noble resistance cracked. Five minutes after entering the match, Mahala Opoku shattered the deadlock in the 67th minute as LAFC claimed a 1-0 victory, extending its winning streak to seven and lengthening D.C.’s scoreless streak to four games.

United (6-15-4) has not won — or scored — since a miraculous finish against Orlando in Coach Wayne Rooney’s debut.

It was not without opportunity. Birnbaum was robbed by goalkeeper Maxime Crépeau in the first half and, two minutes after Opoku’s goal, Taxi Fountas hit the left post from 30 yards.

The schedule does not get any easier: On Saturday, United will host the Philadelphia Union (13-3-9), which sits atop the Eastern Conference and, six weeks ago, whaled on D.C. with a 7-0 rout.

David Ochoa, a 21-year-old goalkeeper acquired in a trade with Real Salt Lake last month, became the fifth of six summer acquisitions to make his D.C. debut in recent weeks. Christian Benteke, the former Crystal Palace striker, will complete the arrivals when his work visa is finalized — if not in time for Saturday’s match, then Aug. 28 in Atlanta.

Ochoa — a Southern California native who last year chose to represent the Mexican national team over the U.S. squad — figured to step into the lineup a few matches ago. Amid a running conflict with Salt Lake, though, he had yet to play a regular season match this season, and so Rooney wanted him to work on conditioning and sharpness.

On Saturday at New England, he was in uniform for the first time, backing up Rafael Romo.

In the early going, United defended soundly and attacked with confidence. Jackson Hopkins, an 18-year-old midfielder, tested Crépeau from the top of the box and United drew three corner kicks.

Another good sign for United: It did not concede a goal in the first 20 minutes, as it had done in five of the previous six matches. Los Angeles (18-4-3) enjoyed ample — and dangerous — possession but couldn’t shoot straight.

If not for Crépeau, United would have taken the lead in the 26th minute on Birnbaum’s downward header off Martín Rodríguez’s free kick. The Canadian flashed to his right and made a spectacular hand save on the 11-yard bid.

The half ended without a goal — and without a shot on goal by the hosts. But LAFC also went scoreless in the first half Saturday against Charlotte before roaring to a 5-0 victory.

United’s yellow-card problems were mounting, and in a 10-minute span early in the second half, Birnbaum received two and was sent off. (He will miss Saturday’s match.)

LAFC took advantage on a counterattack, spearheaded by Carlos Vela, who touched the ball wide to Cristian Arango. Arango drew Ochoa out, then crossed to Opoku for a simple finish into an empty net.

Here’s what else to know from United’s defeat:

Kamara and Berry in reserve
Since taking the helm, Rooney has been starting Ola Kamara, Miguel Berry, or both, in attacking positions, but on Tuesday, he left both on the bench and placed Fountas up front. Berry entered in the 71st minute, Kamara in the 82nd.

Berry, acquired from Columbus last month, has not scored in six appearances (four starts), while Kamara has recorded one assist in his past six matches. …

Defender Chris Odoi-Atsem rejoined the squad after missing two matches because of health and safety protocols. He entered in the 82nd minute.

Welsh star Gareth Bale and Italian defender Giorgio Chiellini were not in uniform for LAFC for the second consecutive match. On Monday, Coach Steve Cherundolo had hinted at their possible continued absence, citing conditioning and minor ailments. They seem probable to return Saturday at San Jose.

United announced it had mutually parted ways with Ecuadoran national team forward Michael Estrada, who on Tuesday signed with Mexican club Cruz Azul. On loan from Toluca (Mexico), Estrada hadn’t been in D.C. uniform since a July 20 friendly against Bayern Munich.

He scored twice in the season opener against Charlotte and finished with four goals and four assists in 16 league appearances (11 starts). In anticipation of the move, Estrada had departed the club last week.