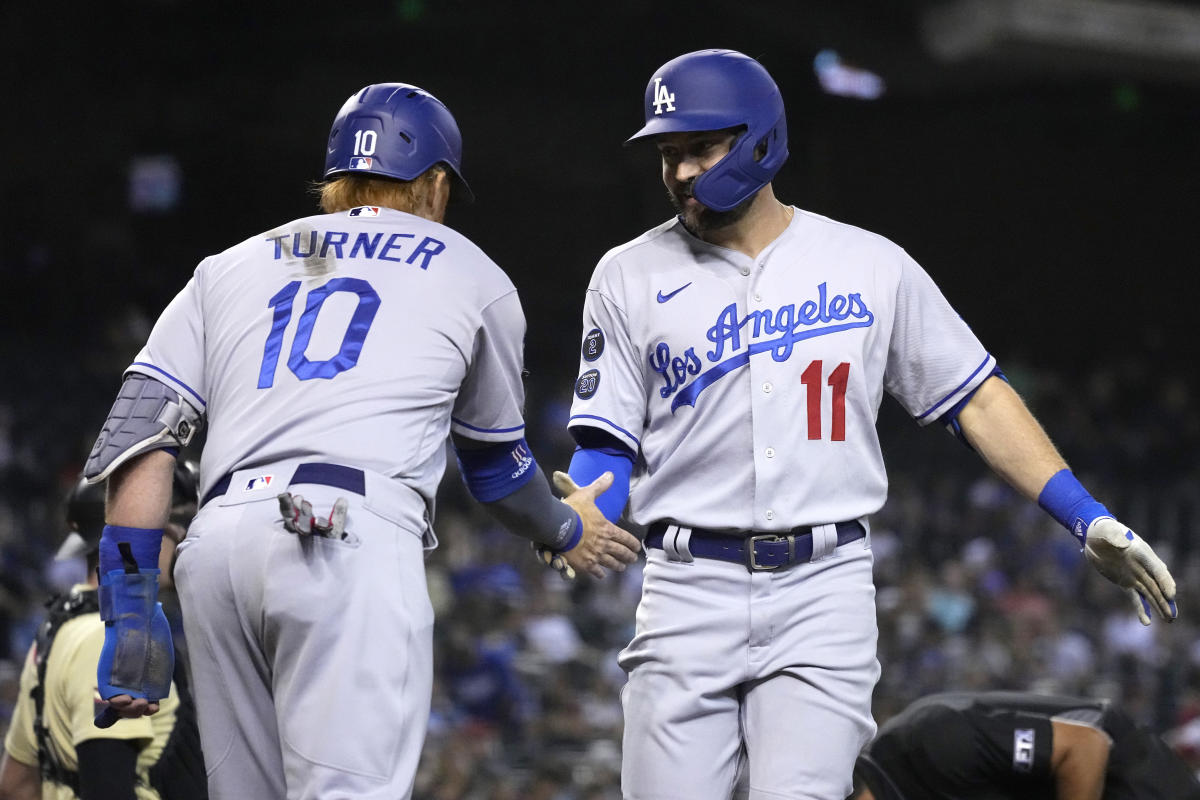 Gonsolin raised his arms in the air, then tipped his cap to Pollock.

It wasn’t the last time the Dodgers pitchers would get some big-time help from their defense Friday night.

Pollock added a two-run homer, Chris Taylor robbed a pair of potential extra-base hits on defense in the ninth inning and the Dodgers kept pace in the NL West race by beating the Diamondbacks 4-2.

The Dodgers (99-55) remained one game back of the San Francisco Giants (100-54) with eight games left for both teams. The Giants also won Friday, beating the Rockies 7-2.

Pollock continued his 2021 excellence against his former team. The left fielder — who played for the Diamondbacks from 2012-18 — was 19 of 38 (.500) with three homers and nine RBIs in nine games against Arizona coming into Friday.

The 33-year-old robbed Rojas of an extra-base hit with a leaping grab in the first and launched his 17th homer of the season to left center in the second. The two-run shot gave the Dodgers a 3-0 lead.

Pollock’s performance and some solid pitching allowed the Dodgers to continue their mastery over the Diamondbacks this season. Los Angeles has won 15 of 17 games and has a 119-46 scoring advantage in the series.

Jansen earned his 35th save.

Taylor — who was a defensive replacement for Pollock — helped his closer with a diving grab in left field for the first out of the ninth and another running grab for the second, sliding after he caught the ball deep in the corner.

“The diving play — if he doesn’t make that play — it’s a different inning and a different game,” Dodgers manager Dave Roberts said.

Said Pollock: “I’m not sure if I’m making that play — either one of those. We might still be playing.”

Humberto Castellanos (2-2) took the loss, giving up three runs over five innings. Kole Calhoun hit a solo homer in the second inning while Josh VanMeter had an RBI single.

LUX RUNS IT DOWN

Gavin Lux started in center field for just the second time in his career because of injuries to Chris Taylor and Cody Bellinger. He showed he could cover ground in the fourth when he ran far into the deep right-center field gap and tracked down a line drive from Calhoun.

The defensive gem was so unexpected that Daulton Varsho — who started on first base — was nearly on third when Lux caught the ball. Varsho was easily doubled off for the third out of the inning.

“He’s such an athlete,” Pollock said. “He’s not overthinking it.”

The Diamondbacks fell to 49-105 and are 51 games out of first place in the NL West. Arizona is trying to avoid its worst season in franchise history,

The D-backs were 51-111 in 2004. They have to win at least three of their final eight games to avoid tying that mark. Calhoun said there’s still plenty of motivation to finish the season on a good note. After facing the Dodgers, they’ve got a three-game series against the Giants.

“We have a chance to impact how the postseason lays out,” Calhoun said. “We want to go out and play good baseball against these guys.”

Despite the tough season, Arizona extended manager Torey Lovullo’s contract through 2022 on Thursday. There’s also a team option for 2023.

Taylor (sore neck) is expected to start in center field Saturday, according to manager Dave Roberts. Taylor took batting practice with the team Friday and pinch-hit in the eighth inning, striking out with the bases loaded. He also played excellent defense in the ninth. … Roberts said Bellinger (rib fracture) is progressing but didn’t want to commit to him coming off the injured list Tuesday when he’s eligible.