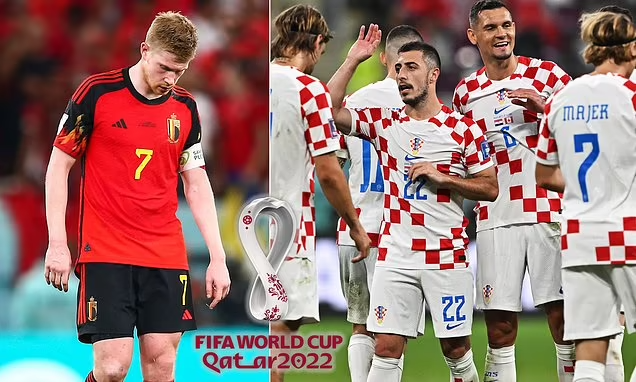 While a tight draw played out between Belgium and Croatia, Morocco fought to a 2-1 win over Canada to top the group and perhaps become the biggest surprise of the 2022 World Cup. It’ll advance and face the runner-up from Group E.

Belgium and Croatia had plenty of chances to earn a winner in their match but nobody could find the net and the end result is Croatia moving on to face the winner of Group E, which is almost assuredly going to be Spain.

Yes, Belgium have crashed out of the World Cup following a 0-0 draw with Croatia, marking a bitter end for the country’s so-called “Golden Generation” of stars.

Coach Roberto Martinez’s side, ranked the second-best in the world by FIFA, failed to find any fluency in Thursday’s clash at the Ahmad bin Ali Stadium and their desperate second-half attempts to break the deadlock ultimately came to nothing.

Belgium’s “Golden Generation” – now featuring six players with more than 100 appearances – is set to split up with the World Cup semifinal appearance in 2018 as its peak.

Unlike their impressive showing four years ago in Russia, The Red Devils managed just one goal in this year’s tournament in a fortunate opening 1-0 win over Canada.

In a bid to spark his squad to life, Martinez dropped captain Eden Hazard to the bench as one of four changes to the side on Thursday which also saw Leandro Trossard and Dries Mertens start for the first time in Qatar.

But their build-up to the match was marred by rumours of infighting between senior players during the tournament – reports Martinez had dismissed as “fake news”.

The 49-year-old, who has been in charge for more than six years, was asked after the game if he will remain as coach in the wake of his side’s forgetful campaign.

“Now, is not the moment [to discuss that],” he answered.

Scoreless draw pushes Croatia into knockout round; Belgium out early

It’s a wonder this game ended scoreless. But after 90 minutes, Croatia and Belgium played to a 0-0 draw, sending the former to the knockout round and the latter home. Belgium had ample opportunities in this one, and at times, too little urgency.

In the 48th minute, Yannick Carrasco missed from outside the box, and a minute later, halftime substitution Romelu Lukaku’s header was saved. In the 60th minute, it was Carrasco and Lukaku again. Carrasco’s right footed attempt from close-range was blocked, leading to Lukaku’s could-be game-winner that hit the near post.

Lukaku’s mind-boggling streak of misses continued in the 90th minute, when Dejan Lovren missed an attempt to head the ball clear and it fell to the Inter Milan striker’s chest. Lukaku could not convert from point-blank range, and his struggles only served to emphasize the quality of Croatian defender Josko Gvardiol, who helped send Belgium and its ‘Golden Generation’ packing.

Croatia was not short on chances, either. It had 11 to Belgium’s 16. It also saw a 15th-minute foul erased, after Croatia was awarded a penalty kick but a review caught Lovren narrowly in an offside position.

Croatia will advance from Group F but finishes second after Morocco’s win over Canada and will face the Group E winner on Monday.

Morocco topped World Cup Group F and clinched a spot in the round-of-16 for the first time since 1986 by defeating already-eliminated Canada 2-1 on Thursday.

Morocco, who needed a win or a draw in their final Group F match to reach the knockout rounds, opened the scoring on four minutes as Hakim Ziyech profited from a weak clearance by goalkeeper Milan Borjan.

With Croatia drawing with Belgium in the other Group F game, Morocco finish first in the group and will face the second-place finishers in Group E.

Canada, who are exiting their first World Cup since 1986 without a win, automatically qualify for the 2026 tournament as co-hosts along with the United States and Mexico.

Germany eked a 4-2 win against Costa Rica in the Group E encounter but failed to qualify for the round-of-16. Japan, on the other hand, defeated Spain 2-1 to finish top of the Group E table. After both the matches, Japan finished with six points, securing two wins from three matches. Spain and Germany were tied at four points but the former advanced on the basis of a better goal difference. Kai Havertz netted twice for Germany, while Sergi Gnabry and Niclas Fullkrg scored a goal each. Germany went into the halftime interval with a 1-0 advantage. However, two early goals by Costa Rica forced them on the backfoot, before Germany came back from behind and restored their one goal advantage. They then netted another to finish the match 4-2. In the other game, Spain took an early lead with Alvaro Morata breaking the deadlock. However, two second half goals by Japan saw them finish the match 2-1.