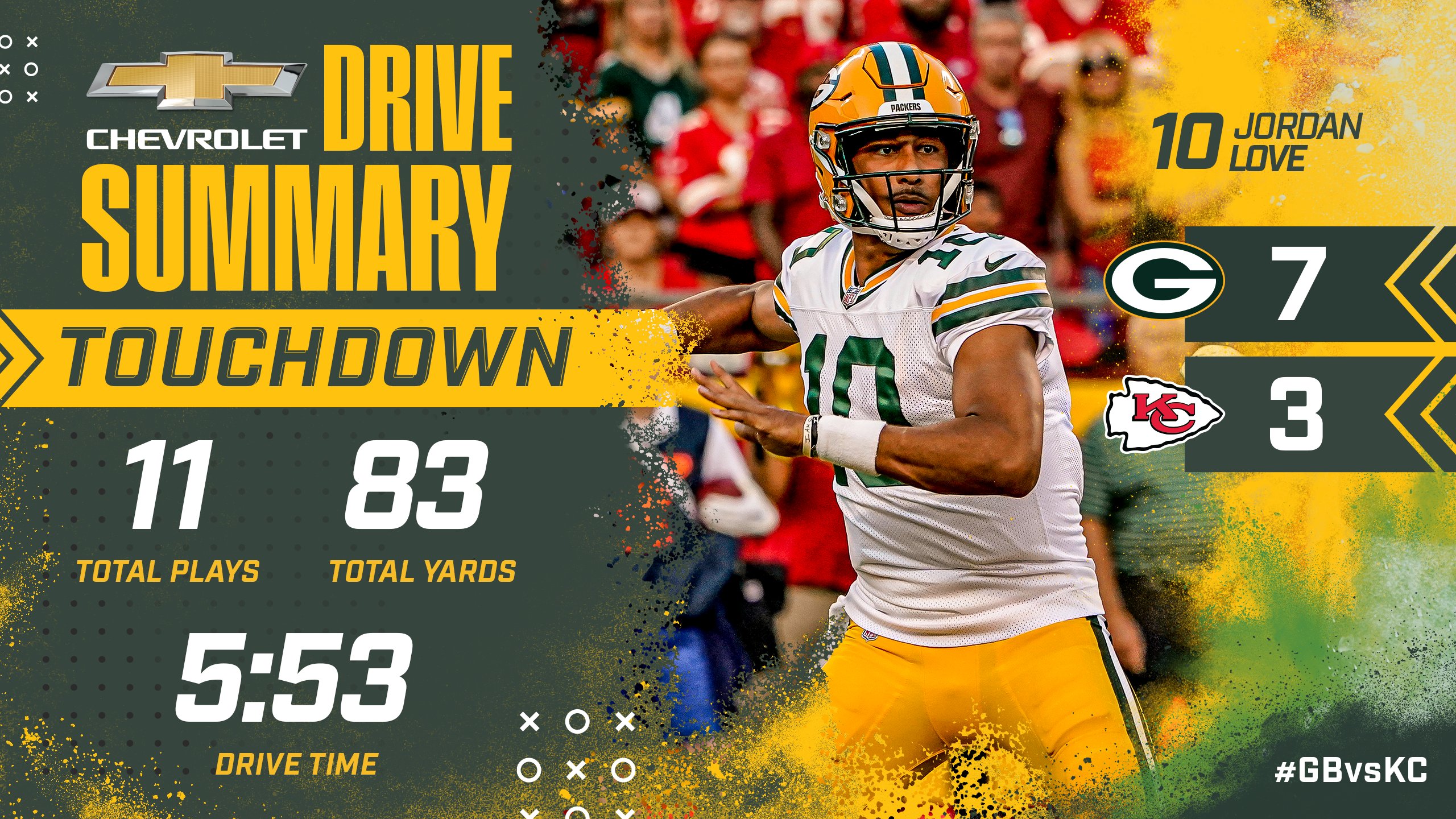 The Packers concluded their 2022 preseason with a 17-10 loss to the Kansas City Chiefs at Arrowhead Stadium on Thursday night.

Here are five takeaways from the game:

Jordan Love shook off a slow start to get on a hot streak.

A sluggish beginning for the Packers’ offense took a turn when a facemask penalty on the Chiefs on a third down kept a Green Bay drive alive late in the first quarter.

From there, Love spent the next two drives in a nice groove, going 7-for-10 for 95 yards in producing 10 points. The seven completions went to six different pass-catchers.

“Those drives, we were putting it all together, hitting plays, converting third downs and what not,” Love said. “We were just moving the ball and it felt good.”

Head Coach Matt LaFleur especially liked the way Love righted the ship when the offense started with two three-and-outs and was headed for a third before the facemask call.

“Early on there wasn’t really a lot open for him and he was under some duress,” LaFleur said. “But one thing I loved about it was when the game doesn’t start out the way you want it to, how do you respond?

“He showed a lot of resiliency, and that shows the maturation process that he’s done over the last couple years.”

Things cooled off as Love played into the third quarter and finished 16-of-26 for 148 yards with an interception, which came during a last-minute drive to end the first half on a seam route for tight end Alizé Mack. The Chiefs safety swooped behind the overthrow for the pick.

In live action, LaFleur said he “was not unhappy with the decision,” and he was thinking about that throw himself. Love said he wishes he’d thrown the ball to Mack’s back-shoulder or taken a shorter throw to keep moving the chains.

“We had some timeouts right there, so that’s a situation I can learn from,” Love said. “I was trying to take a shot right there and forced the ball a little bit.”

As they’ve done all preseason, undrafted rookie Tyler Goodson and second-year pro Patrick Taylor produced with their opportunities, and it won’t be easy deciding which will get the third spot behind starters Aaron Jones and AJ Dillon.

Goodson ripped off a 24-yard TD run on one of the best plays of the entire preseason, and he finished with 54 yards from scrimmage (28 rushing, 26 receiving). Unfortunately, he also muffed a kickoff return.

Taylor had 51 total yards (34 rushing, 17 receiving) and might’ve had a chance to punch in a TD at the goal line if not for a couple of penalties that backed the Packers up.

“That’s a tough one,” LaFleur said of the pending decision. “Both those guys did a nice job. A lot of it’s going to come down to how they performed on special teams.

“I give credit to both those guys. What I saw is guys fighting for those tough yards, coming up in the passing game, finishing tough runs. We’ll see (on the film) how they held up in pass pro.”

Walker was the only defensive starter to play in the preseason, and in just a few series against the Chiefs, the rookie inside linebacker was all over the field.

He recorded five tackles (three solo), making plays along both sidelines, and has displayed all the skills the Packers were hoping for. LaFleur is excited to see him paired with another

inside linebacker in De’Vondre Campbell once the season starts.

He’s even impressed LaFleur on the mental side of things, as the head coach noted seeing him on the sideline watching the defense from a few dozen yards away, taking mental reps when he wasn’t out there.

“I was asking him why he was so far away from the defense late in the game, and he said, ‘I can see everything from back here,’ and I was like man, that’s a great answer,” said LaFleur, pointing out he does the same thing calling plays at times.

Several young defenders were flying around, doing everything they could to make the team.

The defense gave up a couple of big plays, one for a touchdown and another that led to a score, but plenty of defenders did noticeable things in their final fight to make the roster.

Safety Micah Abernathy and defensive lineman Jack Heflin tied with Walker for the team lead in tackles with five, with Heflin getting a tackle for loss on fourth down and forcing a fumble late in the game. Abernathy added a tackle on special teams.

Rookie seventh-round pick Jonathan Ford played extensively and made three tackles, while fellow defensive lineman Chris Slayton showed up once again with a couple of stops.

“There’s a lot of tough decisions our guys are making for us, which is exactly what you want,” LaFleur said.

5. Special teams did not end the preseason on a positive note.

The widespread auditions continued on special teams, and the results against the Chiefs weren’t pretty, aside from veteran punter Pat O’Donnell’s solid outing (56.3-yard gross average on six punts).

The coverage units allowed a 45-yard kickoff return, plus two punt returns of at least 20 yards. The return game also looked shaky as well as unproductive, with unblocked players tackling the returners.