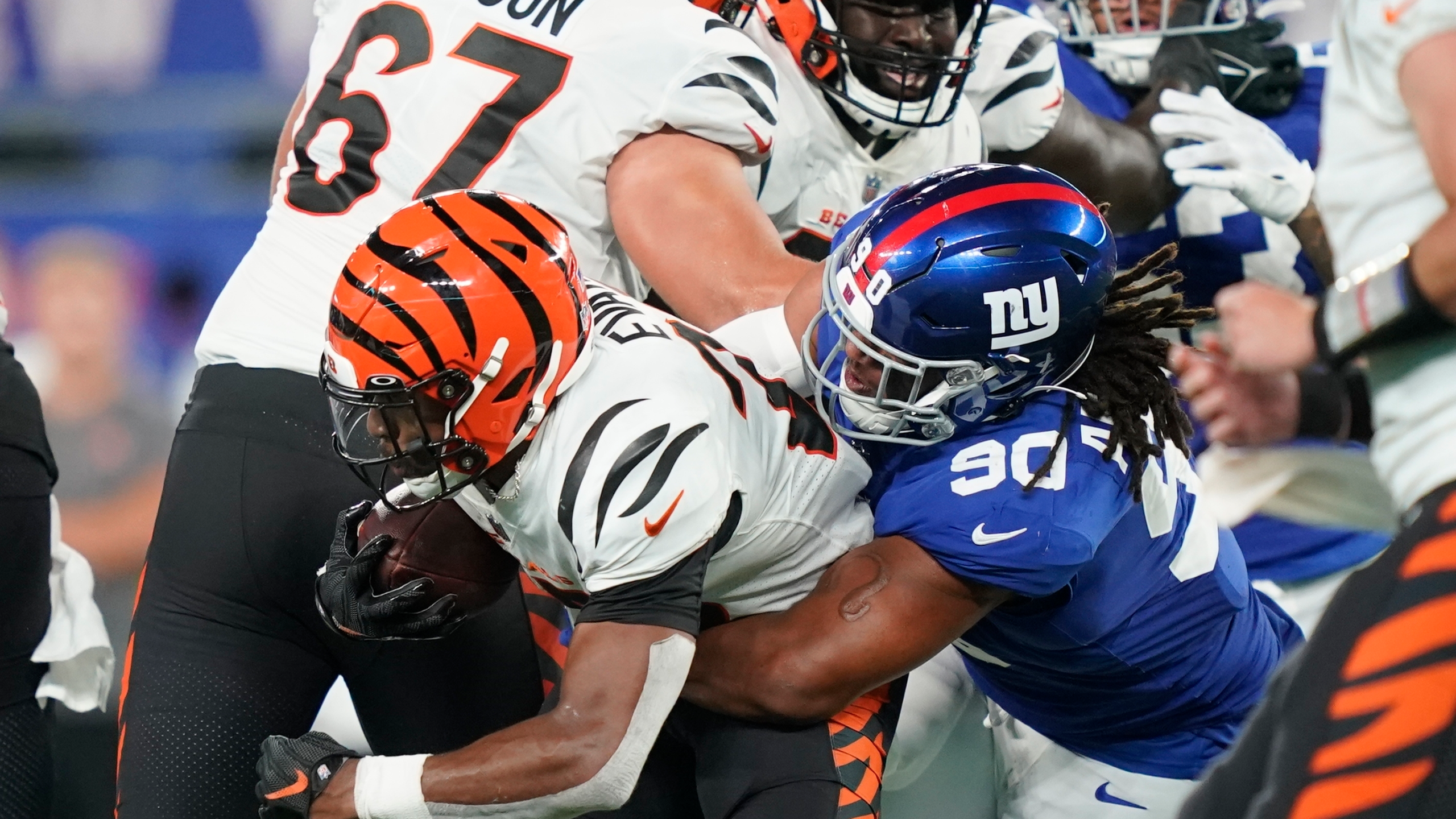 The Dallas Cowboys were a touch slow to start their holiday matchup against the New York Giants, much like many of us battling a tryptophan nap after a festive Thanksgiving feast.

But as the game wore on, the Cowboys seemed to emerge from their slumber more and more. Dallas finally surged in the second half to defeat their NFC rivals 28-20 after a first half in which they stumbled their way to a disadvantage.

Dak Prescott’s day had two parts, much like the Cowboys themselves. He went just 6-for-10 for 116 yards in the first two quarters, good for a 44.8 passer rating. He also threw two interceptions and no touchdowns. But in the second half, he would complete 15 of his 20 throws for 145 yards, two touchdowns, and no interceptions, ending the day with a solid passer rating of 91.1.

For the second time this season, CeeDee Lamb exceeded the 100-yard mark in receiving yards, combining several highlight-reel receptions with his 106-yard output. With many solid catches that resulted in 63 receiving yards, Michael Gallup also had his finest game of the season. Dalton Schultz, a tight end, also contributed, matching a personal high with two touchdowns on the day.

A 57-yard field goal on the Giants’ second drive gave them the opening score. New York was in a wonderful position after the Cowboys failed to convert on a fourth-and-2 at their own 40-yard line. The Giants moved to the 17-yard line after a 23-yard pass connection, and Dallas then got lucky when an apparent touchdown was reversed because of an illegal man downfield penalty. The visitors were soon forced to settle for the field goal.

Prescott’s interception was the result of an obvious offensive miscommunication, but the Cowboys were immediately back in the game at their own 7-yard line after a fast three-and-out and punt. The third time proved to be the charm, as Dallas’ offensive picked up steam this time. On the last play of the first quarter, Gallup caught three passes for a total of 24 yards, and Prescott then threw a 25-yard pass to Lamb to put the Cowboys in position for a field goal at the Giants’ 6-yard line.

To enter the end zone, they simply needed one more snap. Elliott’s burst up the middle for his sixth rushing touchdown of the year completed the 11-play, 93-yard drive. Elliott tied Dez Bryant for the fourth most touchdowns in Cowboys history with his 75th overall career score, which was the touchdown.

The Giants quickly responded, covering 75 yards in nine plays to take the lead, but it didn’t last long. At the Cowboys’ 1-yard line, wideout Darius Slayton delivered the decisive blow by jumping high above cornerback Anthony Brown to pull in a 44-yard grab. Barkley rushed up the middle two plays later to put New York back in the lead, 10-7.

Then another calamity occurred. Just before the half, Prescott threw an interception through the middle for the third time in the team’s previous four games. With 1:50 remaining in the first, he attempted to throw to Lamb once again, but cornerback Darnay Holmes tipped the pass, and safety Julian Love intercepted it. The Giants now had the ball at their own 27-yard line.

The Cowboys wanted to make a statement after a fairly poor first half. They did, taking 7:39 and 75 yards to reach the end zone in 14 plays. Nine of those plays were on the ground, but the touchdown was scored on a Prescott toss of 15 yards to tight end Schultz in the back left corner of the end zone.

The Giants did the same thing here in the third quarter that the Cowboys did on fourth down in their own territory in the first. And the outcome remained the same: Jones’ incomplete throw to Barkley on fourth-and-1 from his own 45-yard line.

The Cowboys’ subsequent drive saw them score their third straight touchdown to start the second half. This time, the highlights came from a 10-play, 80-yard drive that included the rookie tight ends. Jake Ferguson received a brief pass, turned toward the field, and overcame a potential defender for a significant 30-yard gain. Peyton Hendershot then started moving before receiving the handoff and rushing in unimpeded from two yards out to score the touchdown.

The team’s four tight ends then celebrated by jumping into the Salvation Army Red Kettle: Schultz, Ferguson, and Sean McKeon, while Hendershot engaged in a quick game of whack-a-mole.

After that, there wasn’t much more to do except finish the clock and return home for some leftovers from Thanksgiving. A 46-yard field goal attempt by Brett Mahar was missed to the right. The Giants added another score to complete the scoring after that, but it was too little, too late.

With second place in the division now assured and the Philadelphia Eagles still in their sights, the Cowboys will now take advantage of a long weekend.