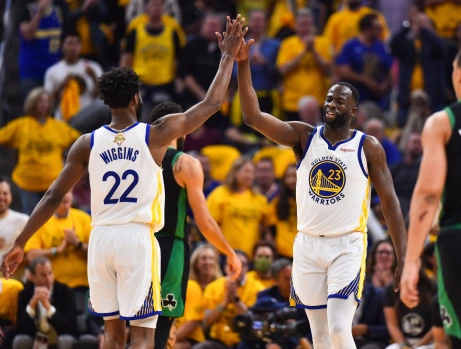 Andrew Wiggins powered Golden States victory on an off night for Stephen Curry, who went 0 for 9 from 3-point range.

SAN FRANCISCO Golden State had been mucking up its offense for nearly the entire third quarter on Monday night when Andrew Wiggins pushed the ball ahead to Jordan Poole, a young guard with enormous confidence. Just before time expired, Poole launched a 3-pointer from 33 feet that banked off the glass before rattling through the hoop.

The heave was a buzzer-beating breath of life for Golden State in Game 5 of the N.B.A. finals and for the teams white-knuckled fans, who rode waves of highs and lows before the Warriors pulled away for a 104-94 victory that put them on the cusp of another championship.

Golden State, which took a 3-2 lead in the series, can clinch its fourth title in eight seasons, and its first since 2018, when the team goes on the road to face Boston in Game 6 on Thursday night.

Wiggins led Golden State with 26 points, and Klay Thompson added 21. Jayson Tatum had a game-high 27 points for the Celtics in the loss.

After a solid start, Golden State was leading by 12, but four Jaylen Brown free throws and back-to-back 3-pointers by Tatum gave the Celtics the first 10 points of the second half, a surprising turn of events given Golden States famously torrid third quarters. The Celtics soon took the lead when Marcus Smart and Al Horford connected on consecutive 3-pointers of their own, part of a 19-4 run.