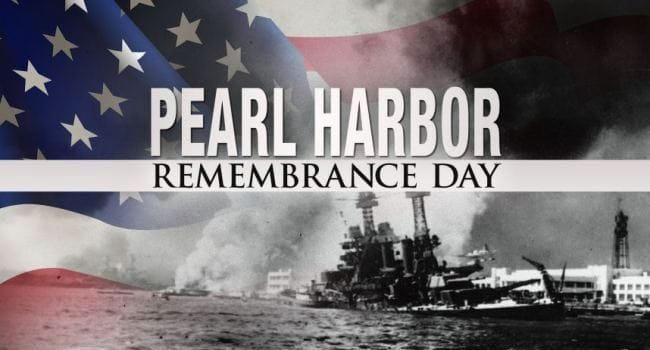 Wednesday marks National Pearl Harbor Remembrance Day and the 81st anniversary of the attack in Hawaii.

On Dec. 7, 1941, the Japanese military made a surprise raid on the United States Naval Base at Pearl Harbor, killing 2,403 U.S. service members and civilians. More than 1,100 people were injured in the attack, which also destroyed aircraft and naval vessels, according to the National Parks Service.

The next day, Congress would declare war with Japan, leading the U.S. into World War II. During an address to a joint session of Congress, then-President Franklin Roosevelt famously called Dec. 7, 1941 “a date which will live in infamy.”

Congress in 1994 designated Dec. 7 as National Pearl Harbor Remembrance Day, and each year commemorations are held in Hawaii and across the country. American flags from coast to coast will be flown at half-staff in honor of the anniversary.

Here’s a look back at the attack and solemn commemorations honoring those who lost their lives.

Pearl Harbor: More than 80 years after attack, a sailor will finally be laid to rest

USS Arizona survivor: Honor those killed at Pearl Harbor ahead of remembrance ceremony

WHY NATIONAL PEARL HARBOR DAY OF REMEMBRANCE IS IMPORTANT

A. It was the worst attack on American soil by a foreign country

The United States was in peace talks with Japan when Japan launched 350 warplanes in a surprise air attack on Pearl Harbor, home of the Pacific Fleet. 330 U.S. planes and 19 ships were damaged or destroyed, and thousands of people were killed or injured.

B. The Pearl Harbor attack drew the United States into WW II

Japan’s designs on the Philippines, then a territory of the United States, precipitated their attack on Pearl Harbor in an attempt to destroy the Pacific Fleet and buy time for them to conquer what they referred to as the Southern Resource Zone. Up until then, the mainly isolationist position of the US prevented our entrance into WW II. That position disintegrated with the attack, as the American people united in a call to war —a call that eventually lead to the Allies winning that war.

C. It is a day to honor our military

This is a good time to think of the hardships and ordeals endured by our service men and women every day and everywhere in the world. The United States is in a position of being the policemen of the world, with hundreds of thousands of service men and women deployed in the protection of our country and people everywhere. Remember them in your actions and your prayers.

On this day 81 years ago, Imperial Japan launched an unprovoked attack on the United States Naval Base at Pearl Harbor, killing more than 2,400 American service members and civilians and destroying much of our nation’s Pacific Fleet. This attack led President Roosevelt to call on Congress to declare an act of war the next day, stating December 7, 1941 would be a “date which will live in infamy.”

As we mourn the lives of those we lost that fateful day, we remember those who defended Pearl Harbor – and all the courageous individuals who signed up to serve our country in battlefields across the globe. Each year, we are reminded of these immense sacrifices and all that we owe our service members who fight to defend the freedoms we cherish.

On Pearl Harbor Remembrance Day, let us reflect on the meaning of sacrifice and heroism and pay solemn tribute to the American heroes who gave their lives to make the world more safe, free and just.