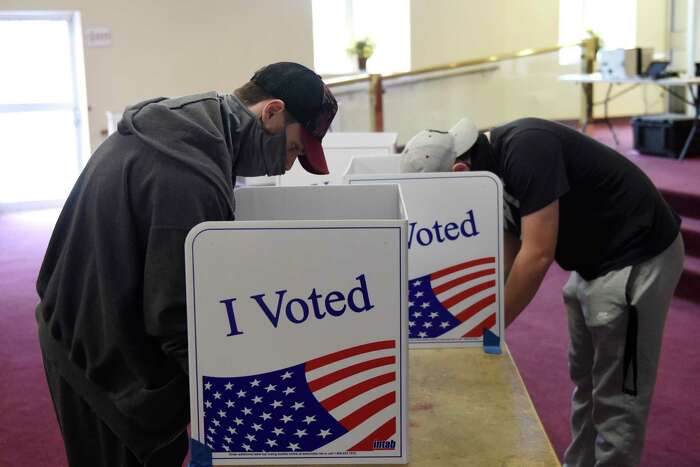 For first-time voter MacKenzie Tacka, voting in Tuesday’s primary election wasn’t as bad as she expected.

“I feel really adult now,” she said. “I feel like I finally got to do something for my country.”

Despite initially feeling intimidated, she said everyone at her polling location, C. Milton Wright High School in Bel Air, was nice and helpful. Tacka, of Bel Air, said some of her main issues influencing her vote were increased crime and women’s rights in the wake of Roe v. Wade being overturned.

“For the past 18 years, I’ve just had to sit back and watch,” she said, “but now I can actually do something about everything that has been happening. It’s really enlightening.”

Tacka walked out of C. Milton Wright High School around 9:30 a.m., part of a slow trickle of voters similar to the morning pace seen at Southampton Middle School in Bel Air and Aberdeen High School.

Stephanie Taylor, elections director for the Harford County Board of Elections, said about 588 election judges were out in the field Tuesday out of a desired 742 judges, according to Friday estimates. She said they recently had several judges drop out.

Although they were not able to staff all the polling locations as much as they would have liked, they were all still staffed nevertheless. Taylor said that there weren’t any lines as of 1 p.m. Tuesday.

Crime was one of the main issues for Edward Hill, a lifelong Democrat who changed his party affiliation to Republican last year due to his dissatisfaction with Joe Biden’s presidency.

“This has gone from the smartest country on Earth and to the dumbest,” Hill said. “[I’m] totally 100% against the far left. They’re out of their mind.”

Hill decided to vote in-person due to his skepticism of the mail-in voting.

Another issue for Hill was not wanting to see critical race theory taught in schools, which it is currently not in Harford County. And while he’s against abortion, he didn’t see it as his issue to weigh in on.

“I don’t tell a woman what she can do about it,” Hill said, “although I disagree with it.”

“Most of what needs to change is national level,” Henderson, of Aberdeen, said. “I just think we need to come back together as Americans.”