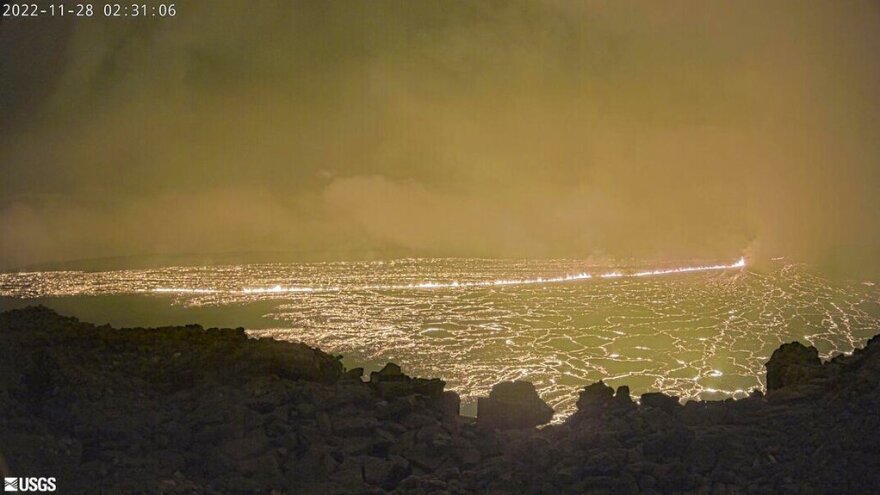 Mauna Loa, which means “long mountain” in Hawaiian, erupted at approximately 11:30 p.m. local time on Sunday. It had been showing signs of unrest since September, according to the U.S. Geological Survey.

As of Monday morning there had been no calls for evacuation. The mayor of Hawaii County, Mitch Roth, said the eruption does not appear to be threatening any downslope communities. But as a precaution, the Hawaii government opened shelters for those who chose to evacuate at the Old Kona Airport in Kailua-Kona and Ka’u gym in Pahala.

Mauna Loa is taller than Mount Everest
Mauna Loa is one of 15 volcanoes located in the eight main Hawaiian islands. It makes up roughly 51% of the island of Hawaii, according to the U.S. National Park Service. From the bottom of the sea, it stands 30,000 feet — more than 1,000 feet taller than the height of Mount Everest. Much of Mauna Loa is underwater, with only roughly 13,000 feet of it rising above sea level.

The volcano’s earliest lava flows can be traced back to between 600,000 and a million years ago. Scientists estimate that the Mauna Loa likely emerged above sea level about 300,000 years ago and has been rapidly growing ever since.

Among the destructive eruptions, was one that occurred in the spring of 1868, when 4,000 acres of land were destroyed and 77 residents died in landslides and a tsunami and landslides spurred by earthquakes. The lava flow spanned five days, and the eruption is considered one of the deadliest natural disasters in Hawaiian history.

Mauna Loa lava flow can change rapidly
As of Monday morning local time, the lava appeared to be contained and showed no signs of exiting the summit. But Mauna Loa eruptions have a history of being dynamic and the flow of its lava can change rapidly in its early stages.

Mauna Loa also tends to erupt lava at a very high rate, which can be particularly dangerous when it descends the volcano’s steep slopes. It can produce “fast-moving and long-travelled lava flows” which require a “quick response,” the U.S. Geological Survey said.

There is also a risk that winds may carry volcanic gas and fine ash downwind to the nearby communities.