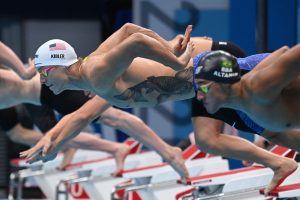 Drew Kibler was fast enough to have a chance to become the first Carmel swimmer to win an Olympic medal.

The question is: Must he step aside, or will he swim in Wednesday morning’s final (11:26 EDT Tuesday) of the 800-meter freestyle relay.

No matter who is chosen for the final, it will be difficult to medal even though U.S. men have never failed to medal in a relay at an Olympic Games. The United States has not been beaten in the 800 freestyle relay since 2000, by Australia at Sydney.

Those who swim in prelims earn the same medals as those in the final.

In Tuesday night’s prelims, the United States qualified fifth overall in 7:05.62. Great Britain was fastest at 7:03.25.

The British feature gold and silver medalists from the 200-meter freestyle, Tom Dean and Duncan Scott, and could challenge the world record of 6:58.55 set by the United States in 2009 during the supersuit era.

Kieran Smith, bronze medalist in the 400 freestyle and sixth in the 200 freestyle, and Townley Haas were held back for the final. Kibler will be considered for the foursome, as will Indiana University graduates Zach Apple and Pieroni, plus Caeleb Dressel. The latter three were gold medalists in the 400 freestyle relay.

Elsewhere, Dressel and Apple both qualified for Wednesday morning’s semifinals in the 100 freestyle. Italy’s Thomas Ceccon had the top time of 47.71, followed by Dressel in 47.73 and Australia’s Kyle Chalmers in 47.77. Apple was 11th in 48.16 to make the cut to 16.