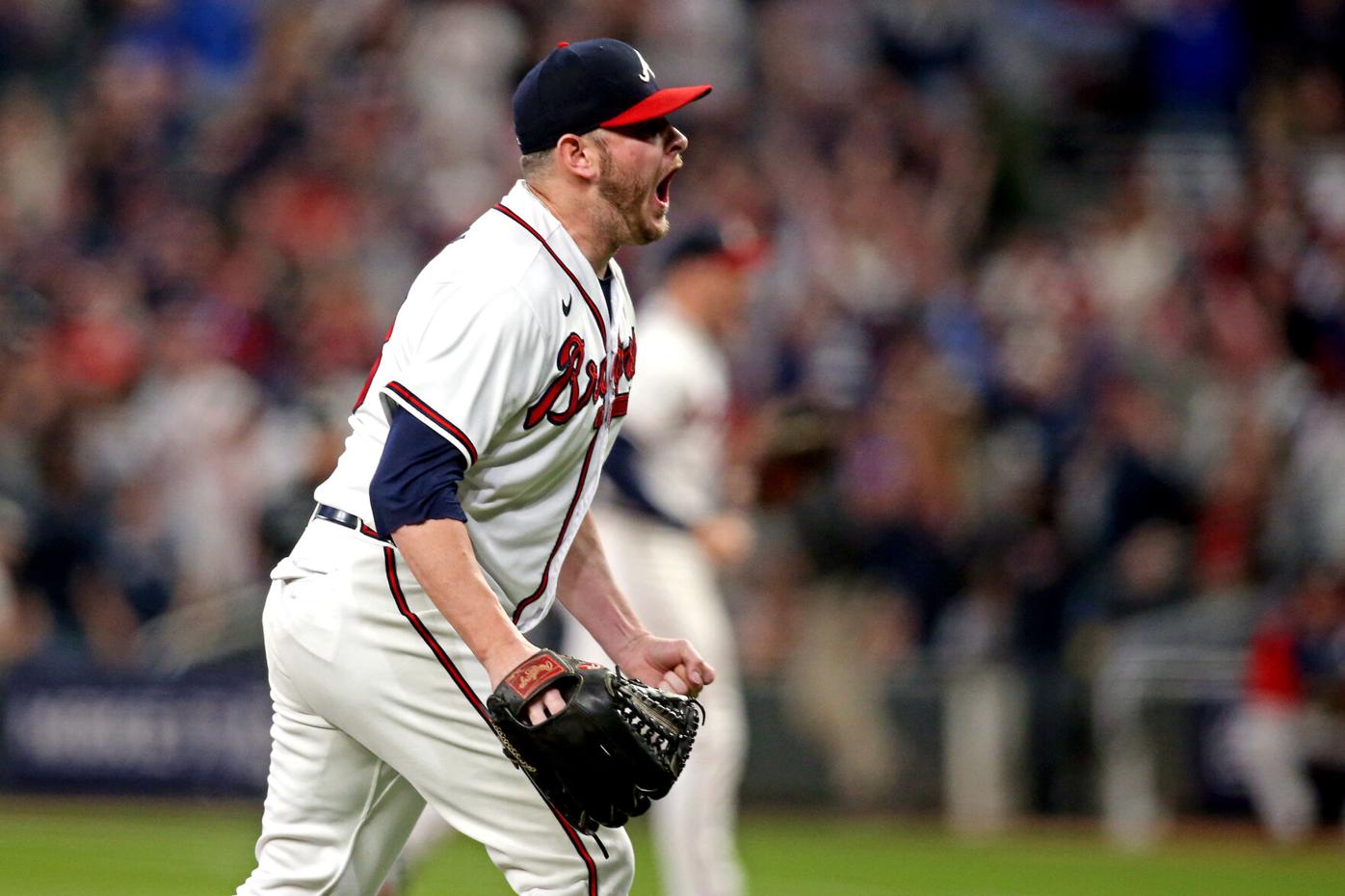 Her husband, Atlanta Braves left-handed reliever Tyler Matzek, a pitcher once so haunted by performance anxiety and a case of the yips that his baseball career had turned to ashes, is in the World Series.

“I’m immensely proud of him,” Lauren said Monday on the eve of Tuesday’s Game 1 between the Braves and Astros at Minute Maid Park. “It’s been incredible to see the time and effort and all of the heart and efforts he’s put in. And now we’re here.

“To make it back to the big leagues was always the goal for him. But now, to see him in the World Series and being so dominant… exceeds anything I ever imagined.”

Matzek, the former Rockies starter who was selected with the 11th overall pick in the 2011 draft, has pitched in nine of the Braves’ 10 postseason games this fall, posting a .118 opponents’ average with 17 strikeouts and four walks in 10 1/3 innings. His eight scoreless appearances in the postseason are one behind Mark Wohlers’ franchise record in the 1996 postseason.

“It’s all been pretty unbelievable,” Matzek said via phone from his hotel room in Houston. “It was always the dream, just to get back to the majors and show what I could do. I’ve wanted to be as aggressive as I can and help my team win.

“When baseball gets taken away from you, then you get moments like this, it’s incredible. One thing I have learned through all of it is this: you learn to embrace the moment. If you do something good, embrace it. If you do something bad, OK, you’ll do better the next time. Now, instead of just dwelling on the bad things, all of the time, I celebrate the good things.”

Matzek, 31, credits two people for his baseball resurrection. His wife, of course, and Jason Kuhn, a former Navy SEAL, who once had his own ambitions of being a major league pitcher before the yips ended his dreams.

On Saturday night, Kuhn sat alone in the living room of his home in Gallatin, Tenn., watching TV, transfixed by Game 6 of the National League championship series..

It was the seventh inning and the Los Angeles Dodgers had cut the Braves’ lead to 4-2 and had runners on second and third, with nobody out. The crowd of 43,060 was getting antsy.

Into the game came Matzek.

Four years ago, he was out of baseball and told his wife it was time to quit. She wouldn’t let him.

Three years ago, he was living in an RV, pitching for the Texas AirHogs of the Independent American Association. He was lobbing 83 mph fastballs because when he cut loose, he tended to throw the ball to the backstop. Two years ago, he was all but begging for an invitation to spring training.

But Saturday night, Matzek was all about the mission at hand: getting the Braves to the World Series for the first time since 1999.

Whistling 96-99 mph fastballs, and mixing in a sharp-breaking 85-86 mph slider, he struck out future Hall of Famer Albert Pujols on four pitches. Then he struck out Stephen Souza Jr. on four pitches and fanned the dangerous Mookie Betts with three consecutive fastballs. Matzek came back out for the eighth, getting a three-pitch strikeout of Corey Seager and two soft groundball outs. Closer Will Smith took care of the Dodgers in the ninth and the NL pennant belonged to the Braves.

“His stuff was electric,” Kuhn said. “For him to get up there and strike out three guys, then strike out another in the eighth, was amazing. I was laughing, I was crying. I was just so incredibly happy for him.”

“It’s got to be one of the greatest pitching performances there’s ever been in the postseason,” Freeman told reporters after the game. “That was unbelievable. If they score, they’re starting to feel good about themselves. The fact they didn’t, that was a huge deflator right there.”

Matzek and Kuhn first hooked up in 2017 when former Rockies catcher Michael McKenry suggested Kuhn could help Matzek overcome the yips. McKenry and Kuhn both played baseball at Middle Tennessee State, though at different times.

“I really thought I had the stuff to pitch pro ball,” Kuhn recalled. “But in my senior season, I threw six wild pitches in one inning. The record for a game in our league was seven, and to be honest, I threw a lot more wild pitches than that, but they took pity on me and they stopped moving runners on me. That was the last competitive game I ever pitched.”

Then came Sept. 11, 2001, and Kuhn joined the military with the goal of becoming a Navy SEAL. He made it, and along the way, he learned about himself.

“Courage creates freedom,” said Kuhn, who founded Stonewall Solutions, a company that counsels clients to create team-building, mental toughness, and leadership. “I learned that I could be imprisoned by the opinions of others and the odds, or I learn from my failures and keep moving forward.”

When “Hell Week” began for Kuhn and the others wishing to become Navy SEALS, there were 135 in the group. By the end, 20 were left.

“I never would have been one of them without failing in baseball,” he said.

And, as Kuhn got to know Matzek, he became convinced that he could get the pitcher back to the majors.

“Jason changed my perspective on life, on everything,” Matzek said. “From the point that I started working with him, the goal of getting back to the big leagues became realistic.”

Adds Kuhn, “We connected. I knew exactly what he was feeling. I had the yips. It’s a very lonely and confusing and devastating place to be.”

Matzek and Kuhn talked extensively on the phone, and Matzek journeyed to Tennessee to train. Fixing the pitcher was both a mental and physical process. When Matzek was on the mound, Kuhn would sometimes blare an airhorn in an attempt to rattle Matzek and break his concentration. Little by little, Matzek regained his confidence.

“Tyler had tried everything else, and I said to him, ‘It’s not working, is it?’ He said no. I told him, “I know how to beat this and it’s a step-by-step process.

“I don’t believe you just think they yips away, you have to train it away.”

There was a lot to “train away.”

But less than a month after starting the Rockies’ 2015 home opener, it all fell apart. He walked six batters in two innings, managing just 20 strikes in 58 pitches. Subsequently sent down to Triple-A to regroup, Matzek crashlanded, giving up seven hits and seven walks while recording only three outs.

“I was pitching with fear,” he recalled. “That put me into a freeze mindset, and that’s what led to the yips.”

The Rockies eventually gave up on Matzek, granting him free agency in 2016. He was released by the Chicago White Sox in 2017, the Seattle Mariners in 2018 and the Arizona Diamondbacks in 2019.

Matzek’s improbable road to the World Series included stints at all levels of the minors.

“Every time I see Tyler on the mound, it’s a great feeling,” said Walt Weiss, who was Matzek’s big-league manager in Colorado and is currently the Braves’ bench coach. “Because I know what he’s been through and I was there in the dark days.”

Matzek credits Kuhn for his baseball resurrection, but the former Navy SEAL sees it differently.

“I gave him the tools for the toolbox, he did all of the work,” Kuhn said. “I’m so happy for him, but not surprised. Not surprised at all. He’s all heart and courage.”