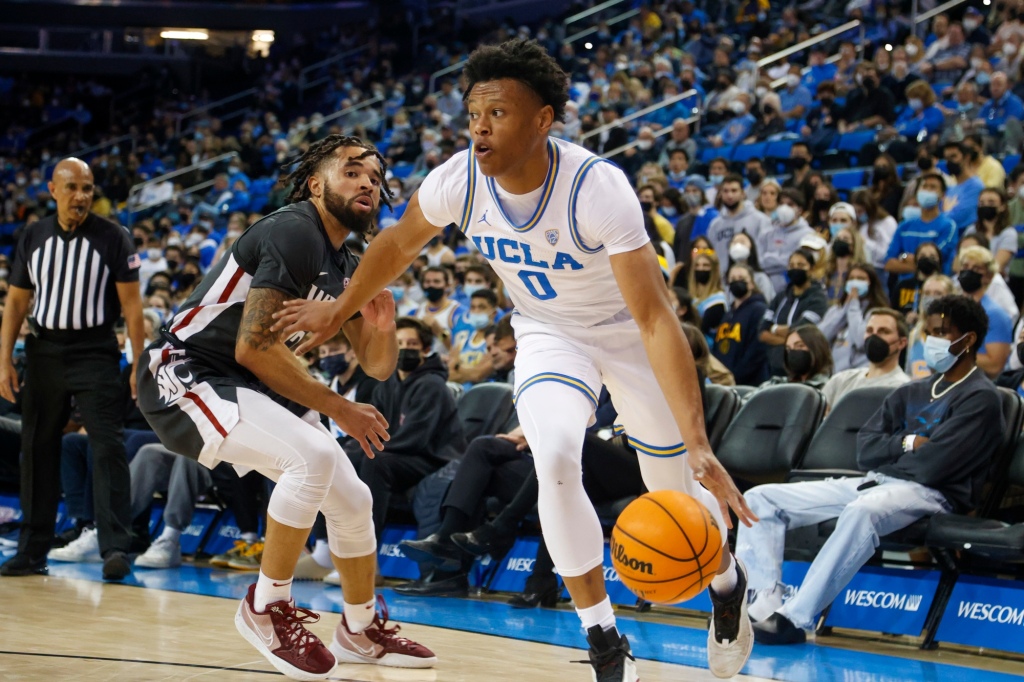 Jaylen Clark allowed himself a moment in the final minute, pumping his right arm and unleashing a shimmy of elation.

He had just followed a steal with a breakaway dunk, the UCLA sophomore guard reviving a crowd that had grown quiet, then antsy with the Bruins’ massive lead dwindling to one point in the second half. Now, with the outcome secure, the fans could finally release all that tension.

For Clark, it was a bookend to another superlative performance. He had commenced a similar celebration late in the first half of No. 12 UCLA’s 66-52 victory over Arizona State on Monday night after he snatched the ball in the backcourt, following the steal with a layup.

The crowd roared, rising for a standing ovation. Clark convulsed with excitement over his latest contribution to a team that appears increasingly invincible every time he’s on the court.

“Making plays like that, when the arena gets loud, it just lifts the whole team,” Clark said after a strong two-way effort that included 16 points, nine rebounds and three steals. “I try and be as animated as possible sometimes after making a crazy play, just to get everyone going and the crowd into it.”

The Bruins (20-5 overall, 12-4 Pac-12 Conference) nearly took their crowd out of it with much of their play between Clark’s highlights. Their defensive intensity nosedived for most of the second half. Their shots stopped falling and their ball movement stagnated without point guard Tyger Campbell, who sat out because of a shoulder injury he sustained two days earlier.

Things bottomed out after Bruins guard Jules Bernard airballed a three-point try at the end of a possession coming out of a timeout. The unease was palpable inside the arena after Arizona State’s Marreon Jackson made a running hook shot to pull the Sun Devils to within one point with eight minutes left.

After leading by 17 points late in the first half, the Bruins appeared on the verge of a collapse against the same team that had handed them their most bitter loss of the season earlier this month.

But they found a palate cleanser in senior guard David Singleton, who drained a three-pointer at the end of the shot clock after sidestepping a defender. Turnover-prone guard Jaime Jaquez Jr. threw a perfect pass to Cody Riley for a dunk. UCLA made several free throws to extend its lead against the Sun Devils (10-16, 6-10).

Soon, the Bruins were back up by 11 points and everybody could exhale.

Jaquez shook off his five turnovers to log a double-double with 13 points and 10 rebounds. Bernard compensated for two airballs with 16 points. Johnny Juzang missed all five three-point tries but added 10 points in his return from a one-game absence from a scooter accident that caused a sore hip.

“Once we started passing the ball versus their help,” Cronin said, “we started getting some shots to go.”

It was an especially encouraging performance from Jaquez, who has worn ankle braces over the last four games to help protect himself from further injuries. He said Monday was the best he had felt in a long time.

“Most guys wouldn’t be playing,” Cronin said of others in Jaquez’s situation. “He’s a gamer of all gamers, so it’s just great to see him get in a little bit of a flow, cause he’s clearly, probably playing at 60 to 70% of who he is.”

Clark, who missed his team’s desert dud Feb. 5 against Arizona State in Tempe — a triple-overtime loss — while recovering from a concussion, appears at full strength for maybe the first time this season. He averaged 19.7 points, 8.3 rebounds and 2.7 steals over the last week for a team that completed a second consecutive three-game homestand in which none of its opponents reached 60 points.

Clark also has a special way of expressing joy, his excitement repeatedly oozing out of him and filling those who watched his continued emergence.

“I feel like, for this team,” Clark said, “I’m an Energizer Bunny.”