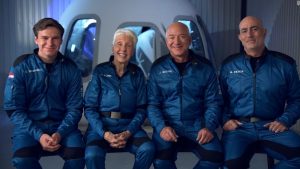 Wearing a cowboy hat under the West Texas morning sun, Jeff Bezos crossed the bridge to enter the capsule made by his company Blue Origin. He was accompanied by three others – his brother Mark Bezos, female aviation pioneer Wally Funk and 18-year-old Oliver Daemen.

Then the shuttle hatch closed and just before 9:15 a.m. ET, the four blasted into space on the first human flight on Blue Origin’s New Shepard launch vehicle.

Bezos is the second billionaire this month to reach the edge of space: Richard Branson rocketed there last week aboard a vessel made by his company Virgin Galactic.

The date of the New Shepard’s maiden launch is no accident: July 20 was the day in 1969 that Neil Armstrong and Buzz Aldrin landed on the moon.

The New Shepard suborbital flight path was designed to go higher than the Kármán line, which is often considered the boundary of space: about 62 miles above Earth.

That line has been a sticking point in the space race between Bezos and Branson.

Branson’s SpaceShipTwo hit a peak altitude of around 282,000 feet – higher than NASA’s designated Earth-space boundary of 50 miles, but short of the Kármán line.

About three minutes into the flight, the booster separated from the crew capsule. Then the New Shepard passed the Kármán line, with hoots of celebration heard over the in-shuttle audio.

A sonic boom was heard as the booster returned to Earth. The capsule remained aloft longer, floating against blue skies.”Who wants a Skittle?” Jeff Bezos asked, tossing one of the candies slowly across the capsule, which Daemon caught in his mouth.

At about the eight-minute mark of the flight, parachutes deployed from the capsule to give the crew an easy touchdown.

The capsule touched down in the desert sand, and a soft plume of dust rose around it. All together, the mission lasted roughly 11 minutes from takeoff to touchdown.

Jeff Bezos stepped off the capsule first, followed by Daemen. Then Funk emerged, her arms flung out in glee. Mark Bezos came out last, and the four embraced family and friends.

The New Shepard’s flight included both the oldest and youngest people to travel to space.

Funk, 82, is one of the last surviving members of a group of female pilots who were part of a test to see whether women were fit for space travel back in 1961. The women passed many of the same tests as the male pilots, and they became known as the Mercury 13 – but NASA never sent them to space.

Daemen, an 18-year-old Dutch student on a gap year, was the first paying customer aboard the New Shepard.

His father, Joes Daemen, founder and CEO of Dutch investment company Somerset Capital Partners, initially secured a spot for his son on the second flight. But the mystery winner of an auction for a spot on the New Shepard’s voyage apparently had a scheduling conflict, and Jeff Bezos invited Oliver Daemen aboard.

The start of a space tourism era

The launch was a big day for Bezos but also for Blue Origin’s space tourism program. The company’s webcast touted that interested viewers should get in touch about booking a spot on a future Blue Origin flight.

Two more flights are scheduled for 2021.

At a news conference following the landing, Bezos announced a new philanthropic award, the Courage and Civility Award.

The award’s first winners are political commentator and social entrepreneur Van Jones and restaurateur and humanitarian José Andrés. Each winner will receive $100 million, which they can give to the charities of their choice.

Bezos touted that the awards feature no bureaucracy. “They can give it all to their own charity, or they can share the wealth,” he said. “It’s up to them.”