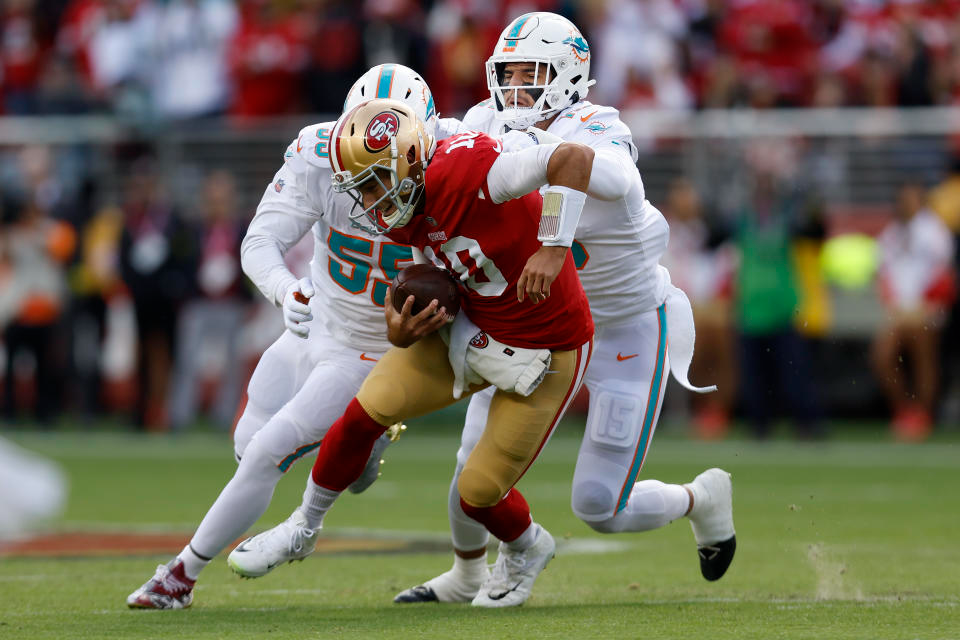 The 49ers will be without Jimmy Garoppolo for the rest of the season after the quarterback sustained a broken left foot during Sunday’s 33–14 win over the Dolphins, coach Kyle Shanahan announced.

Shanahan also told reporters Garoppolo “broke a few things” in his foot and is set to undergo surgery, per NFL Network’s Ian Rapoport. Prior to his early exit, Garoppolo completed two of his four pass attempts for 56 yards.

Garoppolo was forced out of Sunday’s contest after getting sacked eight plays into the Niners’ opening drive. The 31-year-old had to be carted to the locker room for an evaluation and was later downgraded to out after initially being listed as questionable.

Rookie seventh-round pick Brock Purdy took over in Garoppolo’s absence and turned in a solid effort in the win. Purdy, a former Iowa State standout and 2022’s “Mr. Irrelevant,” went 25-of-37 for 210 yards, two touchdowns and an interception.

Sunday’s devastating post-game update marks a brutal end to an impressive campaign for Garoppolo, who unexpectedly re-assumed a starting role after Trey Lance suffered a season-ending ankle injury in Week 2. With both Lance and Garoppolo out, Purdy and practice squad QB Jacob Eason are the club’s only current options under center as the 49ers (8–4) prepare for a playoff push.

While the diagnosis represents a challenging hurdle for the team in the short term, the injury signals the start of another difficult road to recovery for the nine-year pro after battling injuries throughout his career. Garoppolo notably stayed with the 49ers this offseason after the team failed to grant his request for a trade as he recovered from shoulder surgery.