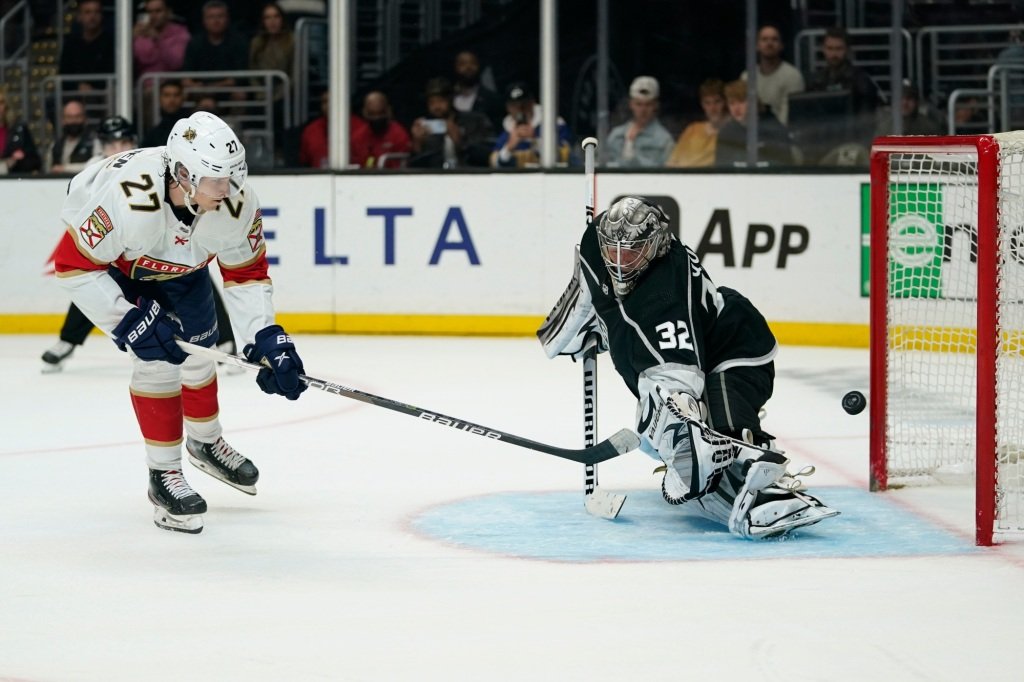 Kings’ goaltender Jonathan Quick, playing in his 700th game, stopped Anthony Duclair’s shot during the fifth round of the shootout to give Los Angeles a 3-2 victory over the Florida Panthers on Sunday night.

Trevor Moore went top shelf to help the Kings snap the Panthers’ five-game winning streak. It was the first time in 31 games the Panthers haven’t won when leading after two periods.

He is the 30th all-time in the NHL and third among active players, trailing Chicago’s Marc Andre-Fleury (926) and Montreal’s Carey Price (707).

“Looking back at playing in that many games, you just think about how many great relationships you’ve made over the years with teammates, coaches, trainers that you’ve been with forever,“ said Quick, who stopped 28 shots to pick up victory No. 352. “Just feel fortunate to have those memories about all those guys.

“A win like tonight, it’s just something that towards the end of the year, these are points that are going to mean a lot.”

Florida’s Aleksander Barkov and Los Angeles’ Adrian Kempe also made their shots in the shootout.

Rasmus Kupari and Martin Frk scored for Los Angeles, which snapped a two-game losing streak and remain in second place in the Pacific Division with 74 points.

The Kings sent it to overtime with 18 seconds remaining when Frk unleashed a slap shot from the left faceoff circle that went top shelf and in near the far post.

“We had a pretty good push the last 10 and finally got that power play,“ Kupari said. “We believed in ourselves, and it was such a great atmosphere after we scored. All the fans were loud today, which gave us energy.”

Los Angeles had a 6-on-4 advantage with the open net and after Florida’s Jonathan Huberdeau was called for elbowing with 1:12 remaining. Panthers interim coach Andrew Brunette said he understood Huberdeau’s anger, but wished that he could have controlled himself considering how much time was left.

“We got what we deserved. We can’t control the uncontrollable. We have to find a way to battle through and go through the adversity and find a way to close that game,“ Brunette said. “We didn’t have a lot of energy all game. We really didn’t get that kind of energy burst to get rolling. We were searching for it. They checked really hard and we had trouble finding space.”

Los Angeles had a power play in overtime after Aaron Ekblad was called for tripping, but could not convert.

Kupari glided past a pair of Panthers’ defenders before releasing a backhander from the left faceoff circle that went through Knight’s legs to give the Kings a 1-0 lead at 11:50 of the first period.

Luostarinen scored his first goal in 27 games 43 seconds into the second period with a shorthanded score on a breakaway. Huberdeau fed Luostarinen on the breakaway for his league-leading 65th assist and tie Edmonton’s Connor McDavid for the scoring lead with 83 points.

Three minutes later, Montour knocked in a rebound of Patric Hornqvist’s shot to give the Panthers a 2-1 advantage.

“Obviously, we would have liked to put them away early. We had our chances but he’s one of the best goaltenders in the league for a reason for last decade,” Florida defenseman Radko Gudas said. “He played really well. I just thought we could have won that game earlier.”

Los Angeles is 3-2 in shootouts this season while Florida dropped to 2-4.