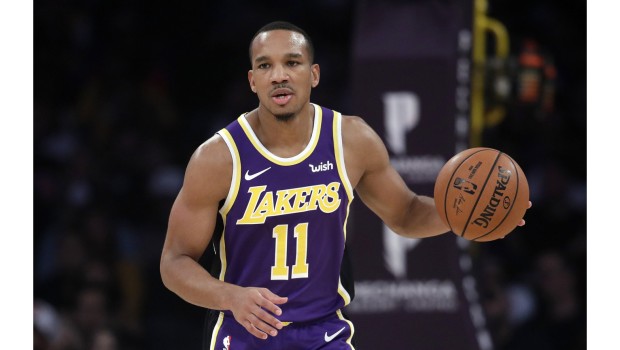 Just a week ago, Avery Bradley was possibly the most unlikely Laker to ever earn a tribute video, having played just 49 games on a title team that he didn’t end up joining in the playoffs.

As it turns out, the Lakers’ minute-long highlight package served as an open invitation: In the week since they played the video for him during a preseason game against Golden State, the Lakers swept up the guard on waivers when the Warriors cut him out of training camp. Even though he never hoisted the Larry O’Brien Trophy, being a Laker is both a treasured memory, and something Bradley’s glad to get back to.

“Being a part of that special team I was a part of is something that I’ll always hold on to for the rest of my life,” Bradley said. “So I’m just happy to have a chance to put the jersey back on.”

He was available to play in Tuesday night’s regular-season opener against the team that cut him, but Coach Frank Vogel said beforehand that he was unlikely to play the 30-year-old on his first day at work.

It turned out that he was called into service quickly: Subbing in after Kent Bazemore picked up foul trouble, Bradley played the last eight minutes and hit a pair of corner 3-pointers.

“I just tried to stay ready until my name was called. And it was,” he said. “And I just wanted to go on there and just play hard. That’s my focus and pick my spots and the ball found me and got a few shots and knock them in.”

For a team that has struggled to learn Vogel’s defensive scheme, Bradley could be a welcome addition. The 6-foot-3 guard was considered a tone-setter during the 2019-20 regular season when the Lakers posted the third-best defensive mark and had the best record in the Western Conference.

The catch for Bradley in 2020 was that he didn’t join the Lakers in the bubble when the season restarted after the COVID-19 pandemic pause. His oldest child had a medical condition that he perceived as a risk at the time. But Vogel suggested there are no hard feelings lingering from Bradley making that call, either from the coaching staff, the front office or the players who were on that squad.

“He made a personal choice based on his family during a pandemic where there’s a lot of fear, and a lot going on,” Vogel said. “So we’re welcoming him back with open arms.”

Occupying the 15th roster spot on a non-guaranteed contract, Bradley likely has a little to prove to hang on throughout the season. He shot just 32.7% from 3-point range last season when he again struggled to stay healthy (he played just 27 of 72 games).

One of the men who made the decision to cut Bradley, Warriors coach Steve Kerr, said he wasn’t surprised to see him back on an NBA team so quickly – although maybe he didn’t necessarily think it would be the first opponent on his schedule.

“You see everything in the NBA,” Kerr said. “The whole question with Avery was whether he was healthy or not, and he did a great job checking out with our training staff. … I thought he played really well for us, and I’m really happy for him.”

As they had been foreshadowing, the Lakers opted to go big in their starting lineup: Center DeAndre Jordan and Kent Bazemore filled the two open spots alongside LeBron James, Anthony Davis and Russell Westbrook.

Bazemore won the spot in part due to injuries to his top competition: Wayne Ellington (hamstring strain) Talen Horton-Tucker (thumb surgery) and Kendrick Nunn (sprained ankle) missed the season opener. But Vogel also said Bazemore’s potential made him a good fit with the superstars.

“He’s shown flashes in preseason of being elite defensively, and he’s shown flashes where he’s still getting up to speed with how we do things,” Vogel said. “And I think early on in the season there’s obviously an adjustment period for him just like there is for all of us, but I think ultimately he’ll be very good for us.”

On Jordan, the Lakers made a decision to start with two centers, which was their formula during the 2019-20 season. While Vogel said Marc Gasol, Montrezl Harrell and Andre Drummond had their respective strengths last season, in the Lakers’ scheme, Jordan and Dwight Howard are expected to be lob threats at the rim.

“Just I think the athleticism by the rim, the shot-blocking, the vertical lob spacing – to me, the lob spacing is every bit as important as 3-point spacing,” he said. “If you have guys at the rim, it puts a lot of pressure on defenses. And those guys play that role better than last year’s centers.”