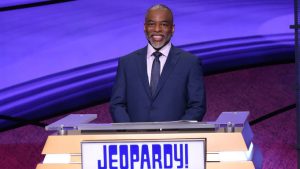 Longtime “Jeopardy!” fan LeVar Burton finally had his moment behind the lectern on Monday.

The former “Reading Rainbow” host, who is also known for his roles in “Star Trek: The Next Generation” and “Roots,” will guest host the show through July 30.

“As a longtime viewer of the show, I am thrilled to have the opportunity to guest host ‘Jeopardy!’ I’m proud to be here to honor Alex’s legacy. I’m going to do my best to ensure that these talented ‘Jeopardy!’ contestants enjoy their moment here as well,” Burton said at the top of Monday’s show.

Burton is part of a roster of interim hosts who are stepping in to fill the shoes of Alex Trebek , who died of pancreatic cancer in November after hosting the game show for nearly 40 years.

“When this opportunity came by, I could not pass it up,” Burton said in a video on the show’s YouTube page.

After Trebek’s death,  Burton’s fans created a petition on Change.org in an effort to get him named as Trebek’s permanent replacement. The petition, which had hundreds of thousands of signatures, was endorsed by Burton himself in April.

“The people have spoken,” Burton told “CBS This Morning” at the time. “All the support and love that I’ve gotten throughout this period has been phenomenal. The fact that there are so many people rooting for me, whether I get the job or not, I have won. I really have.”

Other guest hosts who have taken a turn include “Good Morning America” anchors Robin Roberts and George Stephanopoulos and NFL quarterback Aaron Rodgers. Award-winning sportscaster Joe Buck is also on the roster for upcoming guest hosts.