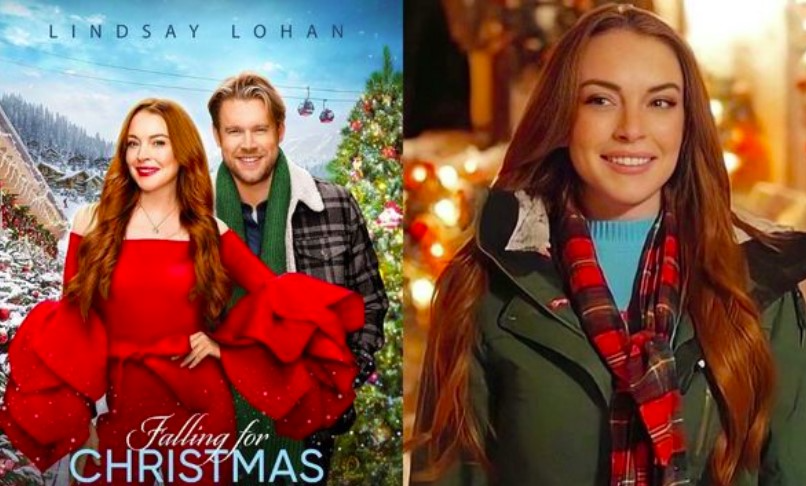 The holiday rom-com “Falling for Christmas” checks all the familiar, expected holiday movie boxes — Christmas is good, greed is bad, a character who looks a lot like Santa Claus turns out to be Santa Claus — with one notable difference from dozens of interchangeable Hallmark Channel clones it mimics: it stars Lindsay Lohan in the lead role.

Yes, Lindsay Lohan, teenage movie star turned twenty something tabloid fixture turned Hollywood disappearing act. “Falling for Christmas” is her first feature film lead role in nearly a decade, and she shows a slight glimmer of the pluck she once brought to the screen in films such as “Freaky Friday” and “Mean Girls.” Don’t call it a comeback, call it baby steps toward the possibility of one.

Lohan stars as Sierra Belmont, privileged daughter of a hotel magnate, who is dating and soon to be engaged to an empty-headed social media influencer, Tad (George Young). A mountaintop proposal goes wrong and sends Sierra speeding straight into a tree, bumping her head and contracting amnesia, and later waking up in a cozy mom-and-pop resort run by Jake Russell (“Glee’s” Chord Overstreet).

Yes, Jake is a widower with a cute daughter and yes, Sierra ends up falling for him while also learning the simple pleasures of doing the laundry and learning how to properly flip a pancake (“it’s all in the wrist!”). No one comes to “Falling For Christmas” looking to unwrap fresh ideas, but it’s still slightly disheartening just how lazily director Janeen Damian goes through all the predictable, telegraphed beats, without at least smirking at them or serving them up with a wink and a nod.

You can plot everything here out with your eyes closed (or with your phone in your hand, which is how “Falling for Christmas” is destined to be watched). Which brings us back to Lohan, who does dutiful work here and plays things perfectly straight, but doesn’t steal the show or rise above the production in any significant way. She’s got a ways to go before a Lohan is sance is upon us, and “Falling for Christmas” is just a stocking stuffer until the real thing arrives. If the real thing arrives.

Not rated: nothing objectionable