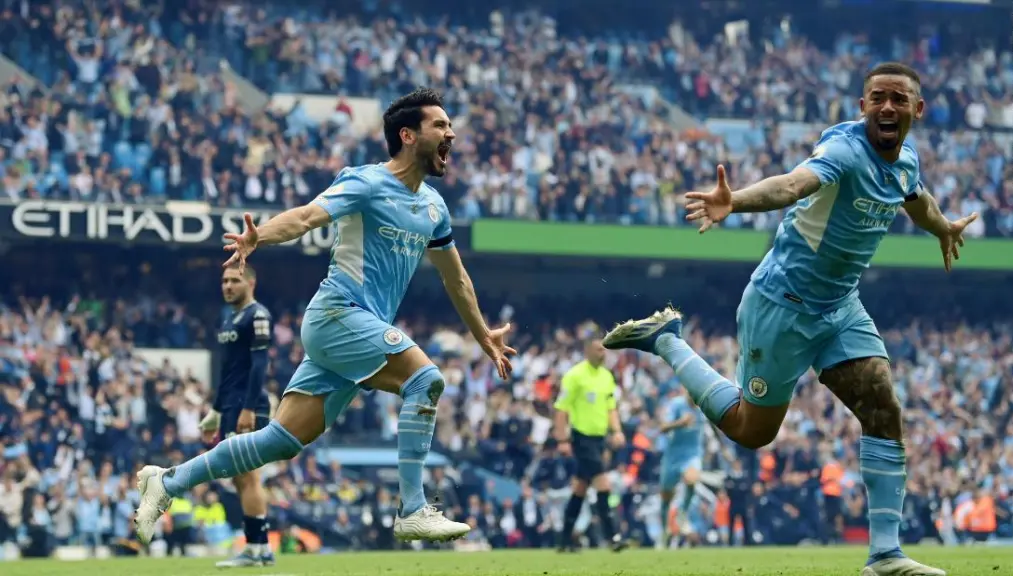 For Manchester City, this was wonderfully stupid, an illogically brilliant way to become champions for the first time in 44 years.

After 90 minutes, City seemed to have tossed their chances away. Trailing 2-1 to the 10 men of relegation-threatened Queens Park Rangers, this seemed the most damaging of defeats, the most painful of losses a club accustomed to self-inflicted wounds have suffered. But then the improbable, the incredible, the unbelievable happened.

Two minutes of stoppage time were gone, three remained. Time for someone to make himself a hero. Sergio Aguero was that man, accepting Mario Balotelli’s pass, accelerating into the QPR box and driving his shot beyond Kenny.

Aguero wheeled away in shirtless celebration, Brian Kidd, the assistant manager, leapt into the arms of Roberto Mancini and the Etihad Stadium went ballistic. The extraordinary had happened. A club that have long done things the hard way had won the league in the most astonishing manner imaginable.

Along the way, Rangers survived, but that was because Bolton Wanderers could not beat Stoke City. But they had threatened the remarkable themselves in an extended rearguard action.

They came in a negative mood but, as the entire QPR team concentrated on defence, so the whole City side focused on attack.

Pablo Zabaleta, the right-back, raided forward time and again and his willingness to burst into the box brought the breakthrough.

Combining with Silva and Yaya Toure, he advanced and shot. Kenny raised his hands behind it, but the ball looped up, dipped under the bar, glanced off a post and bounced in.

And yet, just when it seemed like a procession to the title, a remarkable turnaround occurred. Joleon Lescott misjudged his header, Djibril Cisse bounded clear and dispatched a half-volley past Joe Hart.

Then Rangers’ disciplined efforts were undermined by their captain with a remarkable, though not uncharacteristic, loss of control. The former City midfielder Joey Barton elbowed Carlos Tevez and, after receiving the red card, kicked out at Aguero and tried to butt Vincent Kompany.

Down to 10 men, his colleagues rallied brilliantly. Kenny made a double stop to deny Tevez and, brilliantly, Aguero. Then substitute Armand Traore sprinted 50 yards and crossed, Jamie Mackie plunged forward and headed in.

He, it seemed, had answered Ferguson’s call, along with Kenny who made save after save to deny Tevez and Aguero, Dzeko and Mario Balotelli. But there was only so long he could hold out.