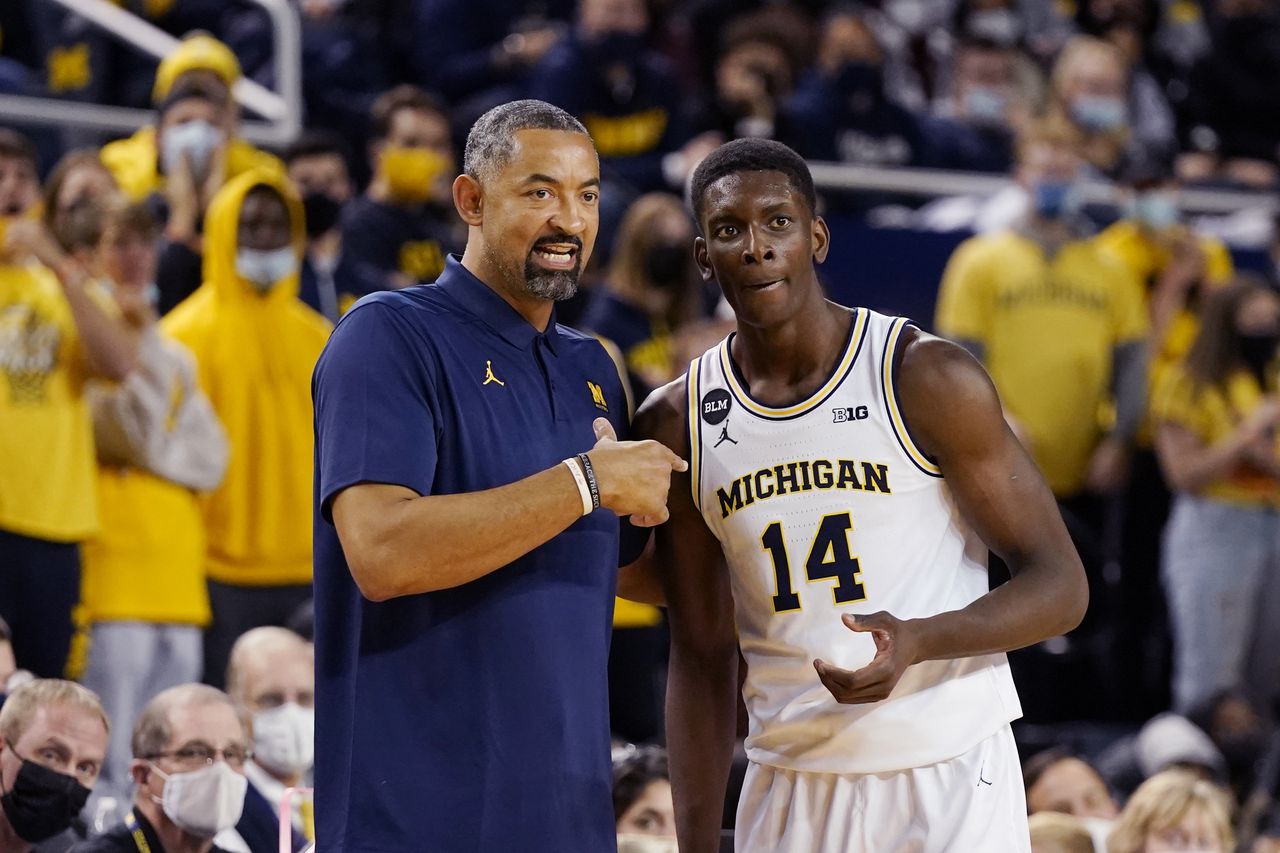 Michigan basketball has now been beaten pretty badly by two different programs en route to its 4-3 overall record. Seton Hall got Michigan first by two points, and then Arizona and North Carolina took U-M behind the woodshed. All three of those opponents are likely tournament teams this year, but Michigan has lost by an average of 13.6 points in those three games.

The program obviously isn’t broken, but there are some cracks forming in this year’s edition of Michigan basketball. Here’s why…

Michigan is talented. Currently on the roster is an All-American in Hunter Dickinson, the winningest player in program history in Eli Brooks, the reigning Sun Belt Conference Player of the year in DeVante’ Jones, and three McDonald’s All-Americans in Kobe Bufkin, Moussa Diabate and Caleb Houstan. This is not a question of talent.

Something is internally wrong. What that is, no one knows right now, but we’ve seen three key things from watching the games so far this season: Brooks and Diabate are the only aggressive, get-a-bucket, scrap on defense players playing right now, the lineup combinations simply aren’t meshing and there is a real issue at point guard. It’s unclear if those things are the cause of the problem or the symptom of the problem, but they’re very real issues. It’s now up to Juwan Howard and his staff to figure that out and they’ve handled problems in the past quite well.

One of those problems is painfully obvious right now and can be addressed immediately — the point guard issue. Jones had a lot of success as a score-first bulldog at Coastal Carolina. His new role at Michigan is not working. He’s not going to be a distributor on this team and you can see that other players know it already. Dickinson has been frustrated and mentally checked out multiple times already through just seven games. Pulling Jones out of the starting lineup is the first and easiest domino that needs to fall.

Jones does have skills that can help this team, though. He can revert back to what he was at Coastal on Michigan’s second line — a score-first, slashing, get-into-the-lane scorer. He’s not the same kind of player as Chaundee Brown, but he can be that kind of contributor in terms of coming in off the bench and doing what he does best. He can come in, get buckets, play aggressively on defense, which will result in fouls like it has so far, and go all out during his limited minutes. How much he plays should be determined by how well he’s playing on that given night.

Freshman Frankie Collins and Brooks should be sharing the point guard duties while U-M has several more tune-up games before the Big Ten schedule gets fully underway. Collins has shown flashes of being very good, and he could be by the time January rolls around if his role is managed correctly. Brooks already is an elite on-ball defender, and Collins has the build and athleticism to be one as well. Michigan needs to be an elite defensive team and has the pieces to do it with its length and athleticism 1-5.

The rest of the roles might take a little time but they’re all definable. Dickinson needs to quit checking out like he has several times this year. He needs to be basketball’s version of Hassan Haskins. He needs to play big and strong, demand the ball, be a leader and put the team on his back. That also means that the guards need to a better job of getting him the ball when he has position, but everything needs to revolve around Hunter.

Houstan just hasn’t been very good so far. There’s no other way to put it. For a top-five, top-ten recruit, he has not lived up to the billing. He’s arguably Michigan’s best three-point shooter, and that’s what he needs to be right now on a team that doesn’t shoot it very well from the outside. He has great size so he should be able to get outside shots whenever he wants. Michigan needs him to be a 40% three-point shooter in order to space the floor.

All of these things were obvious a week ago, yet for some reason Howard is still stubbornly hanging on to things that aren’t working. Inserting Diabate into the starting lineup last night was the only major change made and that obviously wasn’t the answer. Howard, Phil Martelli, Howard Eisley and Saddi Washington have their work cut out for them, and they’re good at what they do, but there are lots of things to fix before conference play begins.