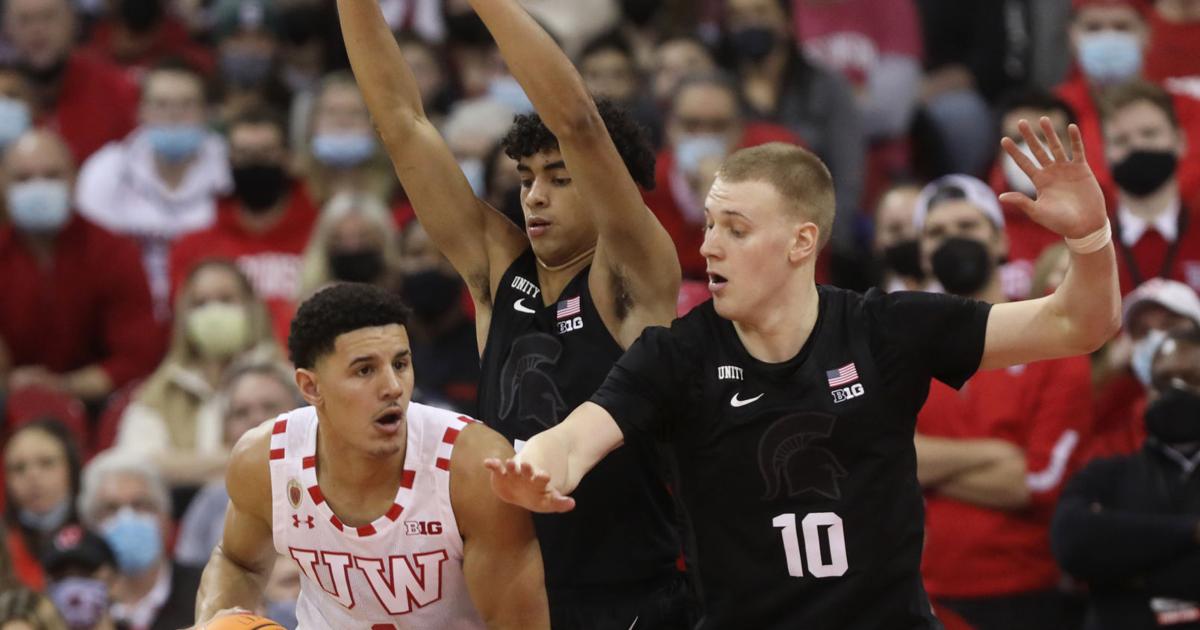 MADISON – After his basketball team concluded its final practice before hosting 13th-ranked Michigan State, Wisconsin coach Greg Gard was asked what injured starter Tyler Wahl had given the team this season.

“Man, what hasn’t he given us,” Gard responded.

And a sell-out crowd at the Kohl Center saw Friday night just how much Wahl means to the eighth-ranked Badgers.

With Wahl out because of an ankle injury suffered three days earlier, the Badgers gave one of the worst overall performances of the season and were beaten soundly by the Spartans, 86-74.

More:Bloodied but not beaten: UW’s Johnny Davis responded to a shot to his nose with a shot that showed up on the scoreboard

“Obviously, he is important to us,” Gard said after the loss when asked about Wahl, who was injured late in the victory Tuesday at Northwestern. “But we have to have other guys step up, specifically defensively.”

The Badgers (15-3, 6-2 Big Ten) saw their winning streak end at seven games and missed a chance to take over sole possession of first place in the league.

That allowed Michigan State (15-3, 6-1), which recorded its first Big Ten victory against a team a winning record in league play, to move into sole possession of first place.

“That was a big win for us,” Michigan State coach Tom Izzo said. “No question.”

The loss of Wahl was critical because the junior had averaged 15.3 points, 6.6 rebounds 2.4 assists and 1.3 steals per game during the seven-game winning streak and is UW’s most versatile defender.

Sophomore Ben Carlson (1.6 ppg, 1.9 rpg) replaced Wahl in the starting lineup and finished with six points and two rebounds in 22-plus minutes.

With Wahl watching from the bench and wearing a protective boot on his right foot and Johnny Davis struggling to get open shots early, UW had little hope.

Davis, averaging 24.3 points and 9.0 rebounds in league games, hit 3 of 13 shots in the opening half when UW fell behind by 16 points.

He finished 8 of 20 and contributed 25 points, five rebounds and four assists.

“We said contain the two superstars,” Izzo said, referring to Davis and Davison. “I’m not sure we did.

“But Davison made some tough threes and I thought we made Davis work for everything. He is just a great player.”

Michigan State, playing for the first time since suffering a two-point home loss to Northwestern on Saturday, dominated UW after falling into the 8-0 hole.

Malik Hall (10 points), Marcus Bingham Jr. (nine points) and Max Christie (eight points) combined for 27 points in the opening half, on 11-for-13 shooting, to help the Spartans build the big lead.

Hall hit back-to-back baskets after UW pulled within 58-52 midway through the second half and finished with 14 points. Christie added 12 and Bingham finished with nine.

UW in the opening minutes appeared ready to overcome the loss of Wahl.

UW had hit 3 of 5 shots; Michigan State had three turnovers on its first four possessions.

That run marked the first-half zenith for UW.

“We came out hot and hit a few shots,” Davison said. “We were getting them to turn the ball over, trying to dictate what we wanted them to do.

“Then it flipped. They got a lot of transition buckets, a lot of rebound buckets. Once we gave them confidence, a lot of their shots started to fall…

“Not a great performance but us but a lot of things we can learn from.”

“After that stretch,” he said, “at the beginning of games we lose our intensity sometimes, which lets teams come back.

“We just completely lost it this time.”

Ultimately, the inability to get stops scuttled UW’s comeback chances.