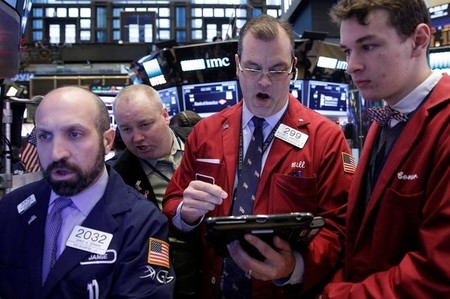 Energy, consumer discretionary, and materials stocks led the way, with all sectors in the green after midday.

Tesla (TSLA) shares jumped 9.4% after the maker of electric vehicles reported an order for 100,000 cars from Hertz Global. The order is expected to generate about $4.2 billion in revenue and the cars will be delivered over the next 14 months, according to Bloomberg News. The rental cars giant had $1.8 billion in cash as of June 30 after emerging from bankruptcy earlier that month, Bloomberg reported.

The Chicago Fed National Activity Index dropped to -0.13 in September from 0.05 in August, the lowest level since April, according to Trading Economics.

Saudi Arabia remains unwilling to ramp up oil supply, with Saudi Energy Minister Prince Abdulaziz bin Salman cited as saying in a Bloomberg interview that the price rise should not be taken for granted because the COVID-19 pandemic could still slow demand, according to a research note from Commerzbank.

Facebook (FB) is aware of the prevalence of abusive content on its platform in a number of developing countries but has failed to take appropriate action including hiring enough staff, Reuters reported Monday, citing unnamed employees and an internal document. Shares rose 0.2%.

Defense and government services contractor PAE (PAE) said it will be acquired by an affiliate of Amentum Government Services for about $1.9 billion in cash. Shares were up 67%.