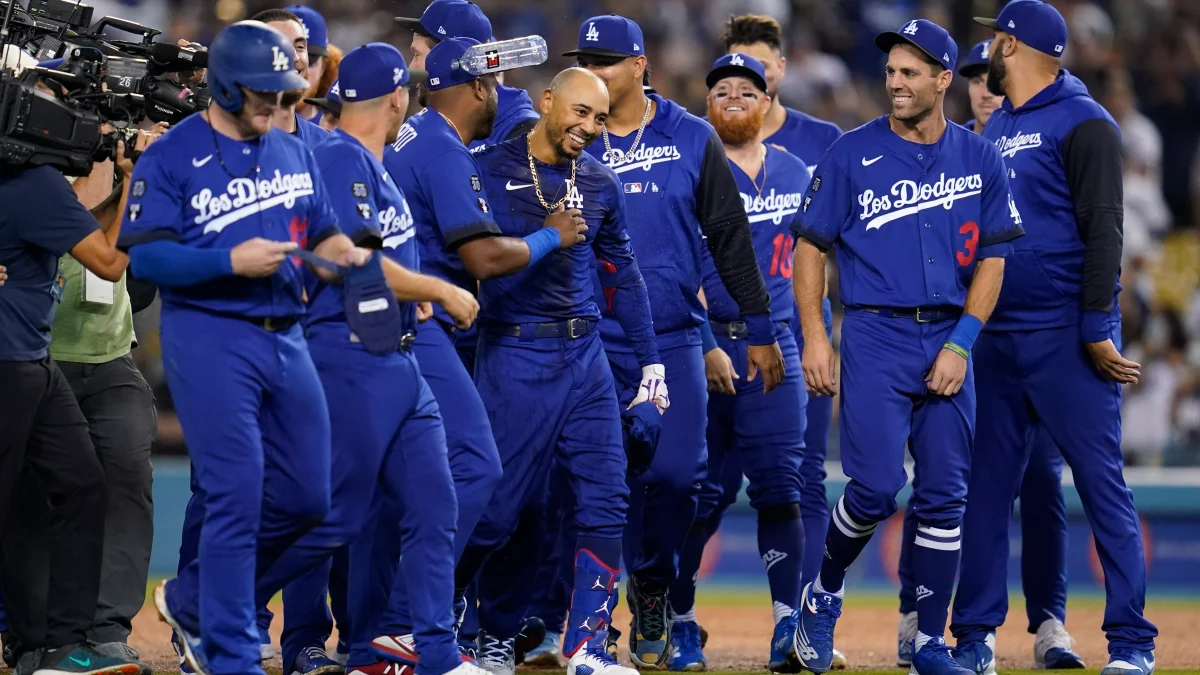 Four hours before the Dodgers defeated the Arizona Diamondbacks 3-2 Thursday on a walk-off hit by Mookie Betts, the eyes of everyone in blue were riveted on the Dodger Stadium pitcher’s mound.

Nobody needed to state the obvious: What they were witnessing could seriously impact their postseason fortunes.

Tony Gonsolin, on the injured list since Aug. 29 with a forearm strain, was pitching to teammates Gavin Lux, Chris Taylor, Hanser Alberto and Miguel Vargas. The All-Star right-hander held nothing back, throwing his four-seam fastball, slider, curveball and split-finger fastball.

Gonsolin, whose injury interrupted a breakout season that includes a 16-1 record and 2.10 ERA, took a break while reliever David Price — also on the injured list — faced the same four batters. Back came Gonsolin for another frame, and when he was done with the two-inning simulation known as an “up-down,” there were guarded smiles all around.

“I thought the stuff was good, the arm speed was good, and he used his entire pitch mix, which was great,” Roberts said. “Assuming he comes out of it OK, there’ll be a bullpen in a couple of days, then another live two-to-three inning, hopefully, up-down. Really encouraging for Tony.”

Just as encouraging was the ninth-inning rally to overcome a 2-1 deficit than enabled the Dodgers to split the four-game series. Cody Bellinger led off with a double — just missing a home run — and Will Smith and Max Muncy followed an intentional walk to Freddie Freeman with infield singles to tie the score. With two out, Betts pinch-hit for Joey Gallo, fouled off a full-count pitch and drove a single to left field to score Freeman.

Betts had the night off, but took some hacks in the batting cage in the ninth inning in case he was needed.

“I was hoping not to hit,” Betts said, “but you get into a situation that calls for it and you turn your brain on and you are ready to go.”

Dodgers closer Craig Kimbrel, as wobbly as ever, was touched for Christian Walker’s home run in the top of the ninth, snapping a tie in a game highlighted by the dominant pitching of Diamondbacks starter Zac Gallen, who struck out 13 in eight innings.

The pitcher who might be the Dodgers next-best option as a closer — Blake Treinen — admitted Thursday he might be unable to pitch in the playoffs.

Treinen was conspicuously absent during Gonsolin’s pregame prelude. Unable to shrug off shoulder soreness, the highly valued reliever stayed in the clubhouse talking at length to a member of the training staff while Gonsolin and Price pitched.

Roberts had expressed skepticism a day earlier that Treinen would be healthy for the playoffs. The pitcher didn’t contradict his manager.

“The body is such a finicky thing that it’s a bit difficult to bounce back the way I wanted to,” he said. “But I don’t think there is a definitive answer yet one way or another. The only thing I can do is try to get to a point where I can be used, where I can help the team.”

The hard-throwing Brusdar Graterol returned from the injured list Thursday, a welcome addition to a bullpen anchored by right-handed Evan Phillips, left-hander Alex Vesia and Kimbrel. Treinen’s inclusion is tenuous at best.

Dodgers starting pitcher Julio Urías throws during the first inning against the Arizona Diamondbacks at Dodger Stadium on Thursday.

“I’d use the word frustrating,” Roberts said of Treinen’s status. “He’s not bouncing back. We are going to give him a couple days of no throwing, then he’ll pick up a baseball Saturday and see how he responds.”

Gonsolin is far closer to a return and it would be an enormous boost. After being idle nearly a month, his stamina might not be enough to last more than three to four innings in the playoffs. Yet he’s given up only 76 hits in 128 1/3 innings.

Without him, the playoff starting rotation could consist of four left-handers: Julio Urías, Clayton Kershaw, Andrew Heaney and Tyler Anderson. All are enjoying fine seasons, but Heaney and Anderson have no postseason experience. Right-hander Dustin May is in the mix, but has been inconsistent in six starts since returning from Tommy John surgery.

After hitting against Gonsolin, Lux fielded ground balls off the fun go bat of a coach until he was huffing, puffing and sweating profusely before the game. Then he proceeded to make a poor decision in the third inning, spinning and throwing wildly to second base after fielding a grounder several steps to his left. The error led to the Diamondbacks’ first run.

The Dodgers answered with two out in the fourth against Gallen, who displayed a devastating knuckle-curve in retiring the first 11 batters — six on strikeouts. Smith tripled and Muncy doubled to tie the score 1-1.

Those were the only Dodgers baserunners through eight innings — Gallen retired the next 13 in a row, including seven more by strikeout. The right-hander is having a breakout season, entering the game 12-3 with a 2.52 ERA.

Roberts pulled Urías in favor of Phillips after the first two Diamondbacks batters in the sixth inning stung the ball — Stone Garrett doubling to left-center and Emmanuel Rivera lining out to Muncy at third. Urías made 89 pitches — 62 strikes — while giving up three hits and striking out five. Phillips struck out two batters to end the threat, Vesia struck out the side in the seventh and Graterol pitched a one, two, three eighth.

To the Dodgers delight, the Diamondbacks replaced Gallen in the ninth with Reyes Moronta, who the Dodgers designated for assignment several weeks ago. Neither Moronta nor left-hander Joe Mantiply were up to the task, and Betts — his brain clearly turned on — delivered.