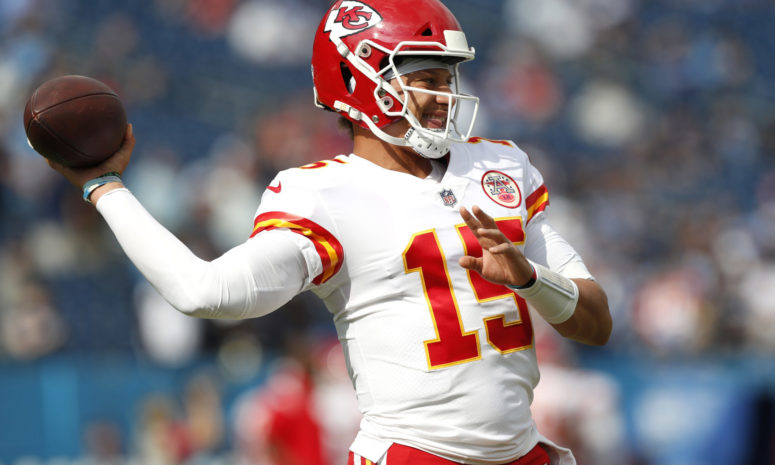 Patrick Mahomes was pulled in the fourth quarter of Sunday’s game despite clearing the NFL’s concussion protocol after taking a shot to the head because coach Andy Reid felt the Kansas City Chiefs’ quarterback needed a break.

It came to that in a 27-3 loss to the Tennessee Titans. Reid and Mahomes expect the quarterback to practice this week and play in next Monday night’s game against the New York Giants.

But Mahomes and the Chiefs will find themselves in an unusual place, and not just because of their 3-4 record. The Titans game marked the first time in Mahomes’ career that he went without a touchdown in a regular-season game. Three points are the fewest for the Chiefs since Reid arrived in 2013.

Mahomes, who threw an interception and lost a fumble on Sunday, and the Chiefs are fighting through adversity for the first time in Mahomes’ pro career.

“We have enough leaders on this team that we have to find a way,” Mahomes said. “I don’t know what that’s going to take yet. We’ll go in. We’ll talk about it. We’ll watch the film but I trust we’ll find it. That’s part of leadership. That’s what great teams are, being able to battle through adversity. It’s been kind of rainbows and flowers and awesome for these last few years. But whenever you want to build something substantial and you want to build something great, you’re going to go through [times] like this.

“It’s still early in the year. We can still get whatever we want but it’s going to take us getting better every single day. … We have the talent in this locker room that we can make it happen.”

Mahomes has thrown nine interceptions this season after having just six all of last season. He has committed multiple turnovers in each of the past three games.

“Today it was probably me,” Mahomes said of what has happened to the usually high-scoring Chiefs. “I was just pressing a little bit too early in the game. We kind of got down and we were in that kind of mode [of] no-huddle, which you don’t want to be in in the NFL. You can execute a little bit but it’s hard to sustain drives. I’ve just got to be better early in games so we don’t get behind like we did today.

“I have to be better in order for this offense to score points.”

The Titans scored on each of their five first-half possessions and led 27-0 at halftime. Mahomes indicated he was trying too hard to help the Chiefs keep up.

“It was just me trying to make things happen,” he said. “In this league you kind of have to let things develop. You have to go through the process of making plays. It takes one play at a time. You can’t have like a 14-point play. They scored early and I kind of have to go through the process of just getting the ball down the field, not trying to do too much.”

He brought up his fumble late in the first half as an example. The Chiefs were driving when Mahomes lost the ball fighting for extra yards at the end of a scramble. The Titans recovered.

“Just go down,” he said. “Why did I try to get the extra two yards? It’s just things like that that add up and end up getting [the Chiefs] beat pretty bad.

“You have to believe in the guys around you. You have to know that you can go the long way, that you can take the short pass and guys can make guys miss. You can hang in the pocket and make throws. I’ll look at this film and learn from it.”

Reid, without specifying that he was talking about Mahomes, said, “I’ve seen our guys do it and make the plays. They’re just not doing it now but I trust those things will get taken care of. … We’re right there to do the right thing and make something happen and it’s bouncing the other way. We’ve got to fix it.”

On Mahomes, Reid said, “He’s trying to make things happen. We’re all part of this.”