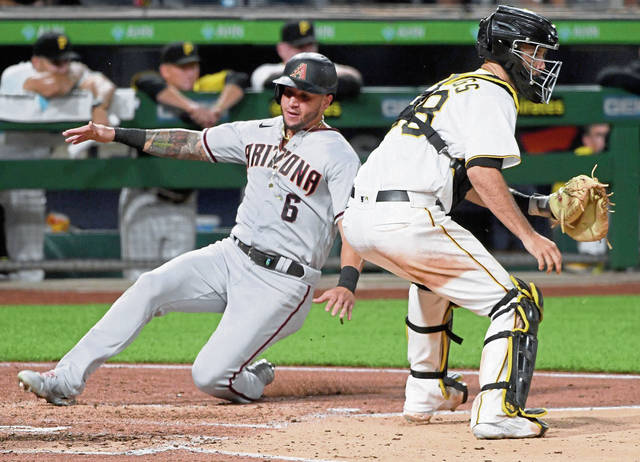 Look at the box score from the Pittsburgh Pirates’ 6-5 victory Monday night against the Arizona Diamondbacks, and you’ll see more runs than the home team has scored in any of their previous eight games.

In certain crucial moments they did when the National League’s two worst teams got together. But the Pirates’ third victory in the past four games can be traced more accurately to shorstop Kevin Newman’s glove and arm, four pitchers working 5 1/3 innings of scoreless, hitless relief and Ke’Bryan Hayes hanging in through 10 pitches to drive in the decisive run in the eighth inning on a groundout.

In fact, the Pirates (45-80) broke a 5-5 tie — after rallying from a 5-1 deficit — without recording a hit. Newman, Wilmer Difo and Ben Gamel drew walks to load the bases in front of Hayes.

“He was trying to get me to rollover for a double play,” said Hayes, who fouled off four pitches from Arizona’s Jake Faria before driving in the winning run.

How did he remain calm with the game on the line?

“For me, it’s pretty easy because I’m super even-keeled,” said Hayes, who walked twice and singled while seeing 31 pitches in five plate appearances. “It’s almost like nobody was on base for me up there.”

That was only one reason the Pirates ended the Diamondbacks’ 10-game winning streak at PNC Park.

Newman was 0 for 2, but he made three slick fielding plays — two in what turned out to be crucial moments in a one-run victory. In the second, he went deep in the hole between third and shortstop, stabbed Christian Walker’s groundball, turned, leaped and threw him out. The next batter, Daulton Varsho, homered off starter Wil Crowe.

In the ninth, Newman went several steps on the other side of second base to throw out Ketel Marte for the second out of the inning.

“I think he was definitely the difference in the game,” manager Derek Shelton said, “and even moreso, he led off the eighth inning with a walk, grinded an at-bat out and he ended up scoring the winning run.”

Newman is hitting .227, but he has been solid all season in the field.

“We sent him home (after last season) with some very strict — I don’t want to say orders — but goals on what he needs to do to get better” Shelton said, “and he took it and ran with it and we’re seeing the benefits of that throughout the season.”

With Newman and Hayes on the left side of the infield, starter Wil Crowe said he tries to force batters to hit in that direction.

“When the ball’s hit on the ground and it’s to my arm side, I feel pretty confident it’s going to be an out,” he said. “I’m trying to throw pithes to utilize those guys. I can’t do it all on my own.”

Crowe didnt pitch poorly for the first four innings, giving up only Varsho’s home run. He looked to be in control, at one point striking out four in a six-batter stretch.

But he ran into problems with the score tied, 1-1, in the fifth when Arizona pitcher Humber to Mejia led off with a double, Marte singled for a run, Carson Kelly was hit with a pitch and David Peralta bounced an infield single down the third-base line. Then, Walker’s long, three-run single into the right-center gap unloaded the bases and gave the Diamondbacks (42-84) a 5-1 lead.

“I felt like I had my best command/feel for all my pitches,” he said after failing to finish the fifth inning for his fourth consecutive start. “That’s why I was getting little frustrated after I would throw an uncompetitive ball (on the first pitch of an at-bat).”

The Pirates bats helped bite into the Arizona lead, with triples by Gamel and Bryan Reynolds, back-to-back doubles by Colin Moran and Jacob Stallings in the fifth and Yoshi Tsutsugo’s pinch-hit home run that started a three-run rally in the seventh. It was Tsutsugo’s first at-bat at PNC Park, his second pinch-hit homer and third oveall in the past week.

Meanwhile, relievers Chasen Shreve, Chad Kuhl, Anthony Banda and David Bednar had Crowe’s back, with Bednar getting his second career save in a span of three days by pitching a one-two-three ninth inning. Bednar, who’s stepped into a closer role, and Kuhl, a former starter, are finding new ways to give the Pirates a lift.

“When guys go into new roles, you’re going to see some ups and down,” Shelton said. “But they threw the ball extremely well.

“Sometimes with opportunity, you have to take a step forward or a step back. That’s what we have over these last (37) games is the challenge for these guys to do it. It’s good to see them step into that.”