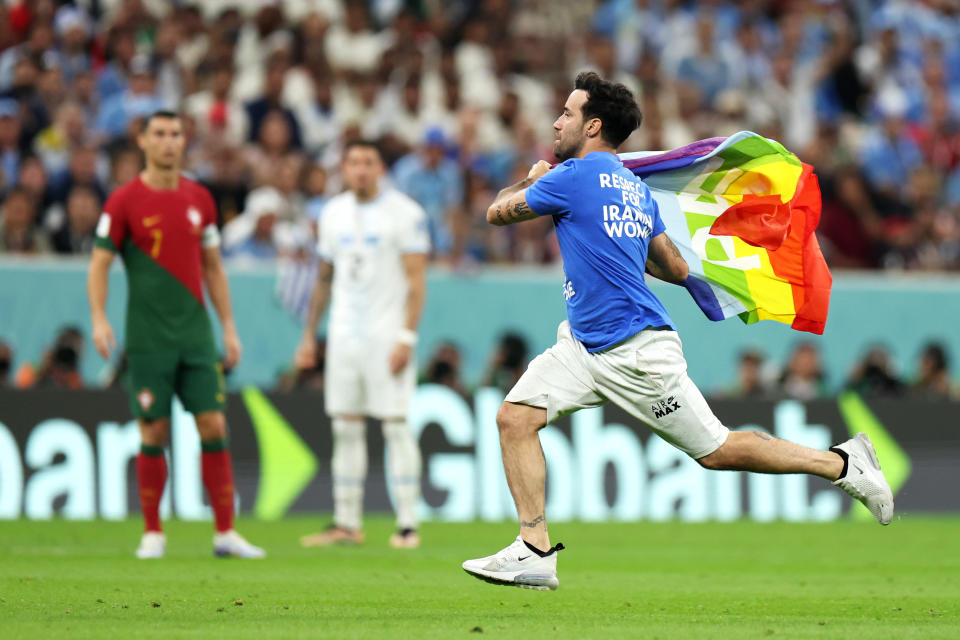 DOHA, Qatar — A protester carrying a pride flag entered the pitch during Portugal’s win over Uruguay on Monday before being led away by security staff.

The pitch invader, who briefly stopped the Group H match in the second half, was also wearing a T-shirt carrying the messages “respect for Iranian women” and “save Ukraine.”

– Ogden: Fernandes, not ‘sneaky’ Ronaldo, leads Portugal into knockouts
– World Cup VAR: Why handball call on Uruguay was totally wrong
– World Cup 2022: How every team can reach round of 16

The protester was ushered away through a tunnel. It wasn’t immediately clear if the person faced any charges or had been detained by police.

Thierry De Backer, FIFA’s media officer at the game, told The Associated Press he had “no idea” what happened to the protester, while a source with Qatar’s Supreme Committee said there would not be a statement about the incident before Tuesday.

After the match, Portugal’s Ruben Neves said: “We know what has happened around this World Cup. It’s a normal thing to happen. Of course, we are all with them as well. Iran as well, because I saw his shirt. I hope nothing happens to the boy because we understand his message and I think all the world understood it as well.”

Bruno Fernandes, who scored twice in the 2-0 win that saw Portugal secure a spot in the round of 16 said he wasn’t sure what message the protester was trying to convey.

“To be honest, I didn’t really see what was the message that was trying to be conveyed,” Fernandes said through a translator. “But we’ve already spoken about that many times. We respect all human rights, but those are political issues where we unfortunately don’t really have much strength, where we can’t really change anything.”

World Cup host Qatar has come under heavy criticism for its human rights record since prior to the tournament, with the lack LGBTQ+ rights a regular flashpoint. Nations including England, Germany and Netherlands were prevented from allowing their captains to wear a “OneLove” anti-discrimination armband after FIFA made it clear players would face “sporting sanctions” for doing so, including receiving yellow cards.

Belgium were ordered to remove the word “love” from the collar of their away shirt.

Qatar has said everyone was welcome, including LGBTQ+ fans, but that visitors should respect the nation’s culture.

Security has been strict throughout the World Cup with “flag and banner evaluation areas” set up at each stadium. Wales fans reported ahead of their first game against the United States that they were asked to remove rainbow-coloured bucket hats, although they were permitted for their second game of the tournament against Iran.

Germany staged their own protest earlier in the World Cup by covering their mouths during their team photo ahead of their opening game against Japan.