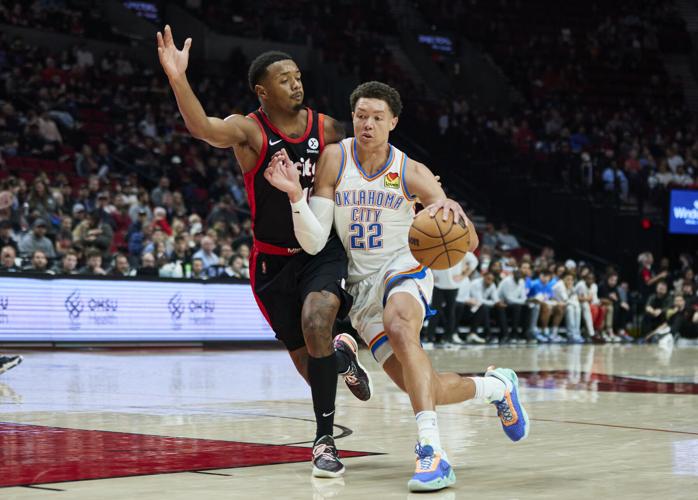 PORTLAND, Ore. Isaiah Roby scored a career-high 30 points on 11-of-13 shooting and the Oklahoma City Thunder rallied in overtime to beat the Portland Trail Blazers 134-131 on Monday night.

Aaron Wiggins added a career-best 28 points for the Thunder, who remain in second-to-last place in the Western Conference with losses in 11 of their last 13 games.

Ben McLemore had 28 points off the bench, including eight 3-pointers, for the Trail Blazers. Portland has lost four straight and also sits outside the playoff picture at 12th in the West.

Wiggins’ layup gave the Thunder a 118-117 lead in overtime before McLemore’s 3-pointer for Portland. Theo Maledon answered with a 3 for Oklahoma City, but Drew Eubanks’ dunk gave the Blazers a 122-121 edge.

Roby’s 3-pointer and a dunk extended the Thunder’s lead to 126-122. Roby added a layup after rookie Brandon Williams’ basket for the Blazers, and Oklahoma City held on.

“We play to win no matter the. It’s a good experience and good vibes right now,” said Oklahoma City rookie guard Vit Krejci, who matched his season best with 12 points.

Eubanks finished with a career-high 27 points and 14 rebounds. Williams had 25 points and 12 assists for the Blazers.

Portland’s biggest lead was 91-81 early in the fourth quarter but it was close down the stretch in regulation. Roby hit a 3-pointer for the Thunder that tied it at 115 with 5.4 seconds left and Keon Johnson missed a 3 at the buzzer for Portland.

“It gave us a chance to compete again and get that win,” Maledon said about Roby’s big 3. “We had the momentum going and we did a great job with that.”

The Blazers had just eight players available. Damian Lillard had abdominal surgery in January and was ruled out for the season, while Anfernee Simons (left knee) and Jusuf Nurkic (left foot) continue to be sidelined.

Portland said rookie forward Trendon Watford sustained a bone bruise to his left femur in the team’s 115-98 loss at home to Houston. Fellow rookie Greg Brown III had a corneal abrasion to his left eye.

“Boy, we played hard. We played our butts off. Had our opportunities, but kind of lost focus at some really important times,” Trail Blazers coach Chauncey Billups said.

The Thunder also used just eight players. Before the game, coach Mark Daigneault said guard Shai Gilgeous-Alexander will miss the rest of the season because of right ankle soreness.

The Blazers led 61-58 at the break after a surprisingly competitive first half, given all the injuries.

The Thunder led by as many as seven in the first half, but Portland was able to stay close and finally pulled in front late when McLemore’s 3-pointer made it 60-58.

McLemore hit another 3 to put Portland ahead 83-78 in the third quarter.

Thunder: Tre Mann (right hamstring strain) was a late scratch. … F Darius Bazley won’t play the rest of the season because of a fracture in his right knee. Bazley was averaging 10.8 points and 6.3 rebounds. … Maledon finished with 23 points and 10 rebounds, while Aleksej Pokusevski came close to a triple-double with 11 points, 11 assists and eight rebounds. … The Thunder matched a season high with 20 3-pointers.

Trail Blazers: ESPN reported the Blazers plan to sign forward Reggie Perry to a 10-day hardship contract. Portland had not announced the deal. … Williams had four 3-pointers in the first half, surpassing his previous career high of three. He finished with five.

Next up for the Blazers is New Orleans — and longtime Portland guard CJ McCollum, who was traded away before the February deadline as the Blazers broke up their roster for an offseason rebuild.

“I think it’s going to be so much fun for everybody to have CJ back in the building. He’s probably going to be overwhelmed with all the love that he gets from our locker room, the fans. It’s much deserved,” Billups said. “So I’m happy to see him. I’m not happy to game-plan for him, obviously.”