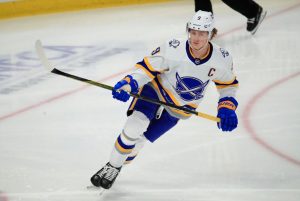 General Manager Kevyn Adams bided his time, fielded offers from teams across the National Hockey League and waited for someone to meet his asking price for injured, disgruntled center Jack Eichel.

The eight-month saga that saw Eichel stripped of his captaincy amid a disagreement with the Sabres over his preferred treatment for a herniated disk finally ended early Thursday morning with the 25-year-old center traded to the Vegas Golden Knights, who agreed to allow the three-time all-star to have the surgery he desires.

Golden Knights General Manager Kelly McCrimmon estimated that Eichel will face a three-to-five month recovery. The timeline should have Eichel ready to compete in the playoffs if Vegas qualifies.

Meanwhile, Sabres fans may not have to wait long to see the fruits of Adams’ negotiations. In addition to acquiring draft choices in 2022 (first round, albeit top 10 protected) and 2023 (second round), Buffalo added playoff-hardened power forward Alex Tuch and top prospect Peyton Krebs.

“We’re thrilled about both of them,” said Adams. “It was really important for us, these two players in particular, and these type of players that we can move forward with for many years.”

A 25-year-old Syracuse native, Tuch is recovering from shoulder surgery and is on track to return in January or February. He has three seasons of 15-plus goals, including a career-high 20 in 2018-19, and his track record includes 33 points in 66 career playoff games. The 6-foot-4 winger should provide a consistent net-front presence in the Sabres’ top six once he joins the franchise he adored as a kid..

“Alex is a very good hockey player, proven in this league,” said Adams. “Under contract for this year and the next four years at a young age, and a very productive player. And high character, leader. All the intangibles. Wants to be a part of the solution.”

Krebs, 20, was the Golden Knights’ top prospect, reportedly untouchable in trade talks with the Sabres. A rash of injuries thrust Krebs into a prominent spot in Vegas’ lineup this season, but he had only 10 shots on goal and zero points in nine games.

While the Sabres are thin at center, Krebs was immediately assigned to the Rochester Americans where he’ll join forces with top prospects Jack Quinn and JJ Peterka. Krebs was named the Western Hockey League’s player of the year for the abbreviated 2020-21 season and made his professional debut last spring, splitting time between Vegas and its AHL affiliate in nearby Henderson.

Krebs had one goal and five points in five games for the Henderson Silver Knights and appeared in four games with Vegas before his season ended with a broken jaw. He was regarded as a top prospect in the 2019 but fell to the 17th pick because of an Achilles injury.

The return significantly bolsters a Sabres forward group that was hit hard by the trade of Sam Reinhart in July. Drafted second overall by Buffalo in 2014, Reinhart was dealt to Florida in exchange for goalie prospect Devon Levi and a 2022 first-round draft choice.

“It’s just making sure we set him up for success,” Adams said of the decision to send Krebs to Rochester. “You’re absolutely right, he could be jumping into our lineup (Thursday) and playing. We know he’s a really good hockey player right now, and what we’re excited about is the hockey player he’s going to become over time. And that’s our focus, making sure we set him up for success. … And when it’s the right time, he’ll be here and be here for a long time.”

Patience can’t be easy for the Sabres given their roster constraints. With Reinhart gone and Eichel sidelined, the Sabres were forced to experiment at center under coach Don Granato. Tage Thompson, Zemgus Girgensons and Arttu Ruotsalainen shifted to the position in camp. The club’s depth took another hit when Casey Mittelstadt suffered an upper-body injury in the season-opening win over Montreal.

While many will evaluate the trade based on Krebs’ development, Tuch should be a key cog for the Sabres and is a proven NHL player, unlike the rest of the return. He had 15 goals during his first full season in 2017-18, followed by a career-high 20. After an eight-goal season in 2019-20, Tuch tied for third on the team with 18 goals in 55 games last season. He had 33 points while averaging a career-high 16:50 of ice time per game.

Tuch is also under contract through 2025-26 with an annual cap hit of $4.75 million, while Krebs is at the start of his entry-level contract.

“I am going to miss the great group they have there,” Tuch tweeted. “Now I want to say how excited I am to be a part of the Buffalo Sabres organization. Being from Upstate NY, it’s been a dream of mine to put on the Sabres jersey. Thank you Buffalo and I can’t wait to get started!”