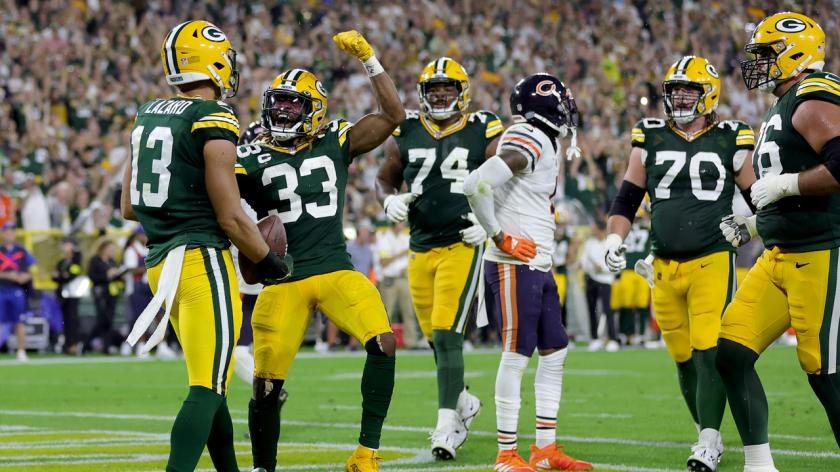 Week 2 is always one of the best weeks of the NFL seasons. It’s the Sunday where everyone collectively wonders “are any of these teams good?” These rankings will reflect that.

The San Francisco 49ers got back to .500, but likely lost quarterback Trey Lance for the season.

Meanwhile, Aaron Rodgers and the Green Bay Packers got back on track with a win over the Chicago Bears at Lambeau Field.

Here’s where each team sits after Sunday’s Week 2 action.

31. Atlanta Falcons (0-2): The universe couldn’t handle the Falcons coming back from a 28-3 deficit. The comeback had to come up short.

30. Seattle Seahawks (1-1): The Seahawks putting four running backs on the field only to throw an interception was perfect. No notes.

29. Washington Commanders (1-1): The Commanders are who we thought they were. Over/under on how many games Carson Wentz has left as a starting QB in the NFL? Six? Eight? Can’t be many.

26. Cleveland Browns (1-1): Brownie the Elf couldn’t save the Browns from stepping in it against the Jets.

25. New York Jets (1-1): Robert Saleh said he was going to keep the receipts of everyone mocking the Jets. After erasing a 13-point lead in 92 seconds, it might be time to unleash some of them.

24. Tennessee Titans (0-1): Tennessee feels like a team that could crumble early. Josh Allen isn’t the quarterback you want to see when you’re trying to find your footing early.

23. Chicago Bears (1-1): Bears’ offense was impressive on the scripted first drive. After? Not so much.

22. Las Vegas Raiders (0-2): Raiders owner Mark Davis got his title when the Las Vegas Aces won the WNBA Championship on Sunday. No need to worry about Vegas’ massive choke job against the Cardinals until Tuesday at the earliest.

21. Jacksonville Jaguars (1-1): The Jags get to be the highest-ranked AFC South team because, well, they have a win.

19. Detroit Lions (1-1): The Lions have scored 30 or more points in three straight games for the first time since 1997. Things might be turning around in Detroit.

18. Cincinnati Bengals (0-2): The Bengals have been borderline atrocious in their first two games and still had a chance to win each of them. That’s something … I think.

17. Arizona Cardinals (1-1): Kyler Murray, Byron Murphy and Isaiah Simmons might have saved the Cardinals’ season. Still a lot of issues in the desert, though.

15. Pittsburgh Steelers (1-1): Mitchell Trubisky was the wise move when it looked like the defense could carry the Steelers to a playoff berth. With T.J. Watt out, it might be time to take a spin with Kenny Pickett. Steelers have nothing to lose.

13. New Orleans Saints (1-1): Bucs linebacker Devin White perfectly summed up Jameis Winston after Tampa Bay’s 20-10 win in New Orleans: “We just knew he was going to give us the ball.”

12. Denver Broncos (1-1): Nathaniel Hackett might not have been ready for the big time.

11. San Francisco 49ers (1-1): Don’t defend Kyle Shanahan for consistently using franchise QB Trey Lance like a battering ram and getting him injured. If Shanahan is such a genius play-caller, you’d think he’d be able to design a way to use Lance’s athleticism without repeatedly running him into the teeth of the defense.

10. Los Angeles Rams (1-1): The Rams avoided a colossal meltdown against the Falcons. But they are still shaking off the Super Bowl hangover.

9. Green Bay Packers (1-1): Getting the ball to Aaron Jones seems to be a recipe for success.

6. Los Angeles Chargers (1-1): Justin Herbert’s fractured rib cartilage is all that matters in Los Angeles. The good news is the Chargers’ doctors have a good track record with chest injuries.

4. Tampa Bay Buccaneers (2-0): Tom Brady might want to rethink retirement after watching the Bucs’ offense struggle against a Saints’ defense that had issues with Marcus Mariota and the Falcons in Week 1.

3. Philadelphia Eagles (1-0): Philly’s defense looked old and slow against the Lions in Week 1. Can the Eagles stop Justin Jefferson from walking all over them in primetime?

1. Buffalo Bills (1-0): The Titans stuffed Josh Allen on fourth down near the goal line in the waning seconds of Tennessee’s win over Buffalo. Don’t think Allen and the Bills have forgotten that as Monday night’s showdown looms.