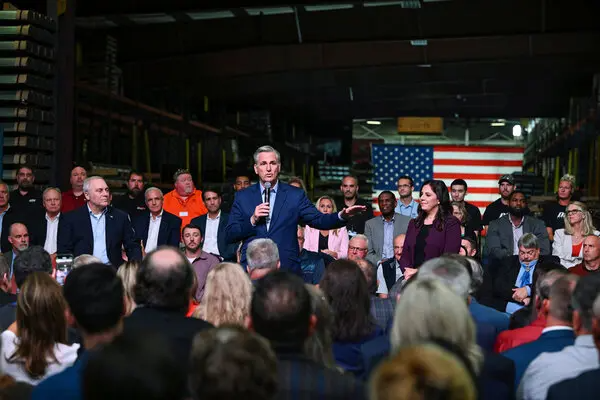 Representative Marjorie Taylor Greene, the hard-right Georgia Republican who has sympathized with the rioters jailed for their roles in the assault on the Capitol on Jan. 6, 2021, smiled widely from her seat at center stage on Friday as her party laid out what its agenda would be if it succeeded in winning control of the House in November.

Just a few seats down sat Representative John Katko, the centrist from central New York, who voted to impeach former President Donald J. Trump over the Jan. 6 attack and is retiring from Congress.

In front was Representative Kevin McCarthy, the California Republican and minority leader who aspires to be speaker and has labored to manage the factions of his party. At a manufacturing plant here, he introduced the “Commitment to America,” an innocuous-sounding set of principles he said would guide a G.O.P. majority, and which appeared aimed at uniting members as disparate as Ms. Greene and Mr. Katko: fighting inflation, securing the border and hiring more police.

“They have no plan to fix all the problems they created,” Mr. McCarthy said of Democrats. “So you know what? We’ve created a ‘Commitment to America.’”

He was speaking to an audience that included 30 of his House Republican colleagues as well as factory workers and local residents in a politically pivotal state that is home to a competitive race for governor as well as critical House and Senate contests.

The agenda was light on details and avoided certain topics that polls show are not favorable to Republicans’ chances of electoral success: the abortion bans that most in the party have embraced, defunding the F.B.I., the Jan. 6 attack or Mr. Trump and his ongoing legal troubles.

Instead, Mr. McCarthy focused on proposals that most in the party proudly support, and that are unlikely to alienate the suburban and independent voters they need to win a majority.

He drew cheers from the crowd when he said the first order of business in a new Republican Congress would be a bill to eliminate the jobs of 87,000 I.R.S. agents. That is the number of employees the Treasury Department has estimated the agency could hire with an infusion of money Congress recently provided to crack down on tax cheats.

But if the agenda soft-pedaled Republicans’ less-popular proposals, it did not omit them entirely. It contained a reference to the party’s commitment to enacting strict abortion restrictions, pledging to “protect the lives of unborn children and their mothers.” It alluded to the G.O.P.’s continuing embrace of Mr. Trump’s false claims of voter fraud in the 2020 election, promising that a Republican majority would “increase accountability in the election process through voter ID.” And it hinted that Republicans would look to change the Affordable Care Act and roll back legislation allowing Medicare to negotiate the cost of prescription drugs, saying that the party wanted to “personalize care” and “lower prices through transparency, choice, and competition.”

Perhaps more than policy, the event was about politics, aimed at uniting an often fractious party behind Mr. McCarthy, who many observers now believe is likely to win only a slim majority should Republicans prevail in the midterm elections. In creating the agenda, Mr. McCarthy consulted with Newt Gingrich, the former speaker of the House who swept into office on the back of his “Contract with America.”

Mr. McCarthy took input from various factions of the party in creating the document, and on Friday, it seemed he had placated most of them — at least for now.

Mr. Katko and Ms. Greene both said they felt it was important to attend the public rollout to show party unity.

“The right rank in our conference doesn’t show up for things like this, but I don’t believe in sitting it out or being mad about something,” said Ms. Greene. Mr. McCarthy has vowed to reinstate her to congressional committees from which she was banned by the Democratic-led House because of her extreme statements. “I want to have a seat at the table.”

Her prominent seat on the stage on Friday was a notable embrace by Mr. McCarthy of a politician who has promoted conspiracy theories and worked to undermine the 2020 election results, but draws large numbers of donors and holds influence on the party’s right flank.

As Ms. Greene spoke to reporters, fans lined up to have their photos taken with her. She left herself considerable wiggle room when asked whether she would back Mr. McCarthy for speaker.

“He’s the only person running for speaker, and I like the ‘Commitment to America,’” Ms. Greene said.

Democrats seized on her seat of honor as evidence that Mr. McCarthy’s agenda was built to mask the party’s extremism.

“The true details of Republicans’ agenda are too frightening for most American voters,” said Representative Steny H. Hoyer, Democrat of Maryland and the majority leader, who traveled to a United Steelworkers headquarters in nearby Pittsburgh to counter the Republican pep rally.

“Leader McCarthy, of course, is in Pennsylvania today because he wants voters to forget,” Mr. Hoyer said. “He also wants Americans to ignore that a majority of House Republicans voted to overturn the 2020 election — even after violent insurrectionists attacked the U.S. Capitol building.”

The Republican event was the culmination of an agenda rollout this week that was at times a bit of a mess. Embargoed materials were accidentally posted online ahead of time, prompting mockery from Democrats before lawmakers were ready to announce it. One document included a quote credited to Abraham Lincoln that is likely apocryphal, according to congressional researchers, one of whom noted that while internet sources have widely attributed it to the 16th president, it appears to have originated in an advertisement by the financial firm Shearson Lehman Brothers from the 1980s.

“Commitment,” the quote reads, “is what transforms a promise into reality.”

A gauzy video filled with pictures presented as idyllic American images appeared to include stock photographs from Russia and Ukraine, according to an analysis by HuffPost.

But in western Pennsylvania on Friday, Republican lawmakers hammered home themes they believe will resonate with voters, even as recent polling has indicated that a “red wave” that had once been expected to sweep the party into office in large numbers has begun to weaken.

The Republicans said they would conduct aggressive investigations into President Biden’s administration.

Representative Steve Scalise of Louisiana, the party’s No. 2 leader, said Republicans would haul in Alejandro N. Mayorkas, the homeland security secretary, for questioning so often that he would need “a reserved parking spot” on Capitol Hill.

“We would like to know how many people have come across our border illegally,” Mr. Scalise said. “Where have they gone? How many have gone to Pennsylvania?”

Representative Jim Jordan of Ohio, who is likely to become chairman of the Judiciary Committee should Republicans retake the House, said he would investigate the origins of the Covid-19 pandemic.

“They want us to believe no, no, no, it went from a bat to a pangolin to Joe Rogan and then we all got it,” Mr. Jordan said, as the crowd laughed. “I’m just a country boy from Ohio, but I kind of think it probably came from the lab.”

Scientists released a pair of extensive studies in February that point to a large food and live animal market in Wuhan, China, as the origin of the coronavirus pandemic.

Although Mr. Trump’s name was mentioned only once during the presentation, some in the audience said they wanted the party to continue his approach.

“I’m one of the millions in this country that may not have a MAGA hat, but I have a MAGA heart,” said the Rev. James Nelson of New Birth Ministries of Duquesne, Pa., speaking from the audience with a microphone.