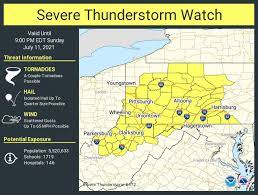 The National Weather Service has issued a Severe Thunderstorm Watch through 8 p.m. in 16 Pennsylvania counties, including all Philadelphia-area counties of Bucks, Chester, Delaware, Montgomery and Philadelphia. The watch is also in Adams, Berks, Cumberland, Dauphin, Franklin, Lancaster, Lebanon, Lehigh, Northampton, Schuylkill and York..

A round of severe storms is in the forecast for the Philadelphia region Wednesday, and they could bring damaging winds and large hail.

There is a 70 percent chance of showers and thunderstorms in the afternoon. While the worst of the storms are expected before 3 p.m., the threat is present anytime through 8 p.m., the National Weather Service said.

Some storms could be severe “with large hail, hail, damaging winds, gusty winds, and heavy rain,” forecasters with that agency said.

Widespread haze, which impacted the region Tuesday and is a result of wildfires out on the West Coast, will linger in the morning.

Accuweather reports the “tumultuous” weather will develop as “quick shots” of moisture arrive.

But expect the pattern to be changing up as the week progresses. “A northwest flow of drier air will prevail, rather than the setup that the region has been stuck in,” according to Accuweather.

A constant flow of air from the Gulf of Mexico has led to “very high humidity and plenty of fuel for slow-moving storms with torrential downpours,” AccuWeather Senior Meteorologist Brett Anderson said.

Some of those downpours last week led to 100-flood conditions in parts of Philadelphia and Bucks County.

Once this round of storms moves through, expect sunshine and clear conditions for several days.

Today: Showers and thunderstorms likely, mainly before 3 pm. Some storms could be severe, with large hail, hail, damaging winds, gusty winds, and heavy rain. Widespread haze before 10 a.m. Mostly sunny, with a high near 85. Light and variable wind becoming northwest 5 to 10 mph in the afternoon. Chance of precipitation is 70 percent. New rainfall amounts of less than a tenth of an inch, except higher amounts possible in thunderstorms.

Tonight: Mostly clear, with a low around 62. Northwest wind around 5 mph.

Thursday Night: Mostly clear, with a low around 60. Northwest wind around 5 mph becoming calm in the evening.

Friday: Mostly sunny, with a high near 84. Northwest wind around 5 mph.

Friday Night: Mostly clear, with a low around 62.

Saturday: Sunny, with a high near 86.