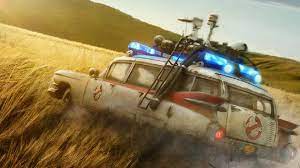 It’s been a long time coming for Ghostbusters fans, but the pandemic-delayed Ghostbusters: Afterlife has a brand-new trailer.

Just shy of four months after Paul Rudd was seen running afoul of mini Sta-Puft Marshmallow men a teaser comes a full-length trailer for THE follow-up to 1989’s Ghostbusters II.

Inheriting a “creepy old farmhouse in the middle of nowhere,” the kids adapt to their new life. “So you’re saying he left us nothing?” their mom, played by Carrie Coon, asks returning player Annie Potts, reprising as Janine Melnitz.

“I wouldn’t say nothing,” Janine teases.

Sure enough, the kids find their grandfather left them the tools of his paranormal investigations and eliminations trade. At first, “nerdy” Phoebe unlocks a puzzle in the floor to reveal one of his signature ghost traps. Later, Trevor gets under the hood of a mothballed ECTO-1, and gets the original “Ghostbusters mobile” roaring back to life.

It’s just in time, too: spirits start emerging from a fissure in the earth. Soon enough, the teens are back at work busting ghosts — complete with some modern modifications to the team’s original gear.

The also teens look up the original Ghostbusters on — where else? — YouTube, and call the number on the old TV spot.

The trailer ends with a phone being answered, and Aykroyd heard saying, “We’re closed.”

Murray, Aykroyd, and Hudson are all returning as their original characters, as is Sigourney Weaver. Ghostbusters: Afterlife opens November 11.