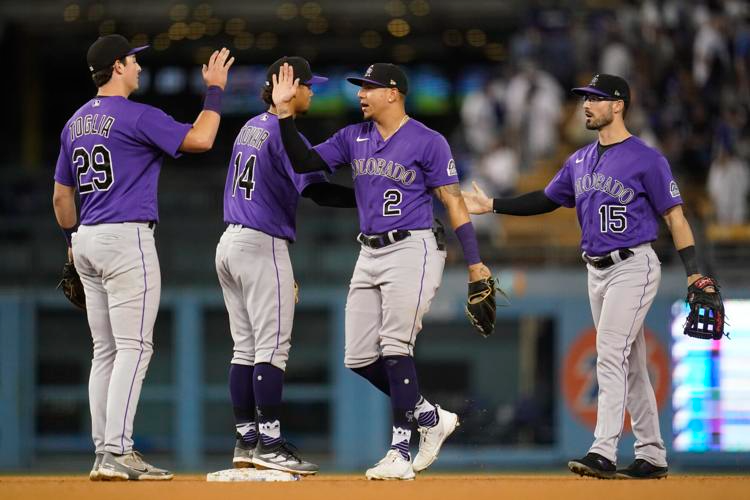 Michael Toglia dunked a go-ahead single into left field in the ninth inning, giving the visiting Colorado Rockies a 2-1 victory over the Los Angeles Dodgers on Monday.

Jose Urena gave up one run on five hits over six innings for the Rockies, who won their second consecutive game after ending a seven-game losing streak.

Sean Bouchard had three hits for Colorado (67-93), including two doubles for the second straight game, and scored the go-ahead run in the ninth.

Trayce Thompson hit a home run for the Dodgers (110-50), who were unable to become just the second National League all time to reach 111 wins.

The Rockies jumped out to a 1-0 lead off Dodgers starter Tony Gonsolin in the second inning. Elias Diaz led off with a single and went to third on a one-out double by Bouchard. Diaz scored on a single by Alan Trejo.

The Dodgers got even in the third inning when Thompson hit his 13th home run of the season, matching his career high. A key piece of the Los Angeles roster since he was acquired from the Detroit Tigers for cash on June 20, Thompson has just two home run since Sept. 18.

Gonsolin, who had been out since late August because of a right forearm strain, gave up one run on three hits in two innings. He had no walks and three strikeouts while throwing 40 pitches. Seven Dodgers relievers combined to pitch six scoreless innings before Brusdar Graterol (2-4) gave up a run in the ninth.

Trea Turner led off the ninth against Lawrence with a single before Freddie Freeman, Will Smith and Max Muncy all flied out.

In two starts at Dodger Stadium this season, Urena has given up a combined two runs on 10 hits over 12 2/3 innings.

The last-place Rockies have won seven of 17 games against the Dodgers this season with two more games between the teams remaining.