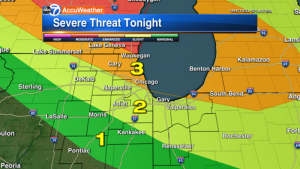 Strong and even severe thunderstorms could blow through the Chicago area overnight packing winds over 60 mph.

ABC7 Meteorologist Larry Mowry said the storms will develop over Wisconsin Wednesday night and could move southeast into the northern suburbs between 1 a.m. and 5 a.m.

While forecasts were divergent earlier in the day, as the storms developed in Wisconsin Mowry said it is likely the storms will move into Northern Illinois and Northwest Indiana in the early morning hours.

Mowry said all indications’ show these storms will be strong to severe, with wind gusts above 60 mph possible. The tornado threat is low, but not zero.

Any storms that do move into the area will pose a high wind threat, with gusts over 65 mph, Mowry said. There is also a low chance that the storms could spawn a tornado. Heavy rain will also be a concern, where a quick 1 to 2 inches of rain could fall.

ABC7’s AccuWeather Team will continue to monitor the radar trends over the next several hours. Tune in to ABC7 Eyewitness News at 10 p.m. for the latest.