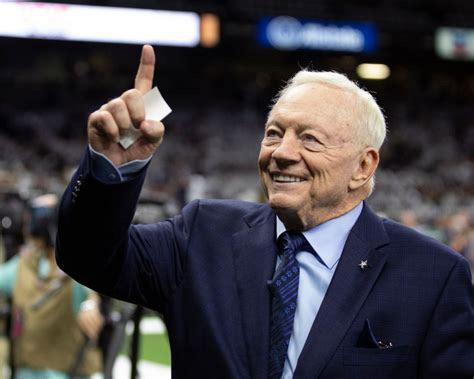 Dallas Cowboys owner Jerry Jones is not shocked by recent developments that Dan Snyder is looking to sell his Washington franchise.

The Commanders announced in a statement Wednesday that Snyder would be exploring potential transactions.

He is said to be considering selling the NFL franchise following years of controversy surrounding everything from the team name to accusations of sexual harassment.

Jones, who has owned America’s Team since 1989, told of his reaction to the news in his usual slot on Dallas’ 105.3 FM The Fan.

‘Well, I don’t think I was necessarily surprised because he recently acquired a very significant portion of the team, 40% from other partners,’ Jones said Friday.

‘And so these are the times that you sit down and start your noodling, so to speak, or try to figure out how you’re going to get there and what you’re going to look like when you get there.

‘So, this doesn’t surprise me that he set up a time of real, real planning or real thinking about how to manage the economic resources it takes to be where we want the Washington team to be.’

It remains unclear if Snyder would sell the entire team or if he’s just looking to add a minority partner. Jones seems to believe all paths are open for potential buyers and indeed the incumbent owner.

‘It sounds like I’m saying that, but I am really saying I bet all options are on the table, and then you see what might be possible.

‘And that’s what I think the exercise is. Let’s look and see what our options are here. See where the big interest is, what makes the most sense, in their case, to the Snyder’s, and then go from there.

‘It’s one thing to sit there at your table and draw up all your plans and figure out how you’re going to get it done financially… but you in the mirror in this case, you need more, and that’s a third party, so he’s out testing the waters.’

Jones last month dismissed the notion that he and Commanders owner Dan Snyder have any issues after it was reported Snyder had said he possessed ‘dirt’ on Jones.

It was also reported in the article that Snyder told a confidant that he has a ‘file’ on Jones.

‘Anything in that was news to me,’ Jones said on The Fan at the time. ‘I don’t have those kinds of problems.’

‘I’ve got a long relationship with Dan. It’s certainly a competitive one on the field and one that is a part of the NFL.’