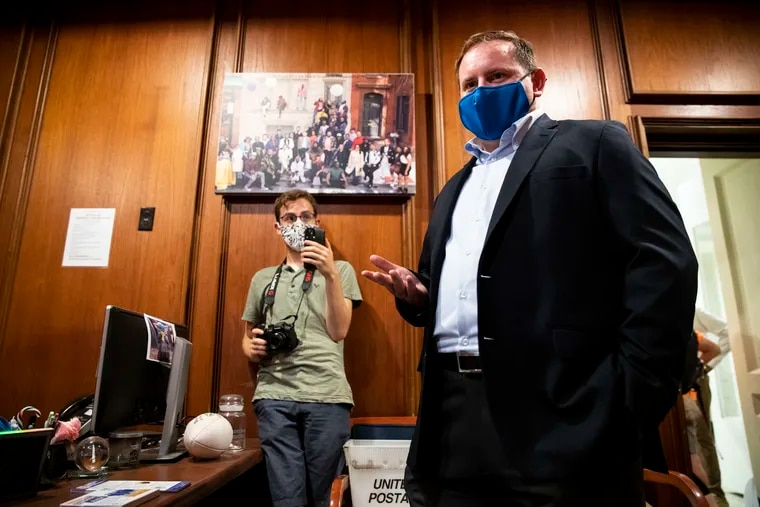 Mayor Jim Kenney’s chief of staff, Jim Engler, will resign at the end of the month to take an executive role with Christiana Care, the Delaware-based hospital chain.

Engler, 37, has been an aide to Kenney since 2013, when he joined the future mayor’s City Council office as legislative director. He is part of a nucleus of longtime Kenney aides who share the mayor’s South Philly roots and ascended to the top of city government with his 2015 election.

Engler’s first job in the administration was deputy mayor for policy and legislation, and he became chief of staff in 2018, playing a key role in the city’s handling of the coronavirus pandemic, the civil unrest following the murder of George Floyd, and the ongoing gun violence crisis.

Known as a no-drama, behind-the-scenes operator, Engler has rarely seized the spotlight.

“The chief of staff role a lot of times is managing conflict that is both inside the administration or outside the administration and trying to reach reasonable compromises to reach the executive’s overall goals, in this case the mayor,” he said Monday. “I don’t have a flashy personality. I’m much more comfortable trying to work on things internally in the organization.”

In his next role, Engler will serve as executive director of the office of the president and chief of staff at Christiana Care.

He will be replaced as the mayor’s chief of staff by his top deputy, Christina Pastrana Hernandez, who joined the administration in February 2016 as assistant director of legislation and went on to lead the mayor’s legislative and policy efforts.

Pastrana Hernandez, 36, previously served as a prosecutor in the Philadelphia district attorney’s office. She was key to the city’s efforts to be selected as one of the host cities for the 2026 World Cup, Engler said.

Pastrana Hernandez, whose parents are from Puerto Rico, was born in New Jersey and grew up in Stroudsburg. She came to Philly to attend law school at Temple University and never left.

Kenney called her to offer the job about two weeks ago.

“He said, ‘You sure you want to do this?’ ” Pastrana Hernandez recounted. “I said, ‘Absolutely. It’s an honor.’ He was as gracious as could be.”

As chief of staff, Pastrana Hernandez said she will be “focused on making sure that we finish out strong on those key priority areas that the mayor has been talking about.”

She said she hopes to emulate Engler’s approach to leadership.

“We have a very similar style,” she said. ”Obviously, I’ve worked with him for many years, and I’ve looked unto him during that time.”

Engler’s resignation will come 15 months before the end of Kenney’s second four-year term, and the race to replace the term-limited mayor is already in full swing. It’s common for top city officials to leave for private-sector jobs in the waning days of mayoral administrations.

“While I accept Jim Engler’s resignation with great regret, I’m also pleased to see him take on an exciting new opportunity, one that aligns with his passions and experience,” Kenney said in a statement. “I will miss Jim’s insight and unwavering discipline, but I am confident that he has built a strong foundation that will allow our administration to build on the major successes during the final 15 months of my term.”

Engler said he is proud of the administration’s accomplishments on education, including securing funding for early education and community schools through Kenney’s tax on sweetened beverages and the creation of the Community College of Philadelphia’s Octavius Catto Scholarship program.

Kenney and the administration have been criticized during Engler’s tenure as chief of staff for what many see as a failure to urgently respond to the myriad crises that have beset the city since 2020, a perception reinforced by Kenney’s often gloomy demeanor in public.

Engler said he believes Kenney’s record — from limiting the toll of the pandemic in Philadelphia, to improving the long-term fiscal health of the city, to bringing the school district back under the city’s auspices after years of Harrisburg control — will look better in hindsight.

“We have tried to respond to [the city’s challenges] in the best way. I think that down the road, this mayor will get more credit than he has gotten,” Engler said. “One of my favorite parts from Hamilton is in the last song, he says, ‘What is a legacy? A legacy is planting seeds in a garden that you never get to see.’ ”