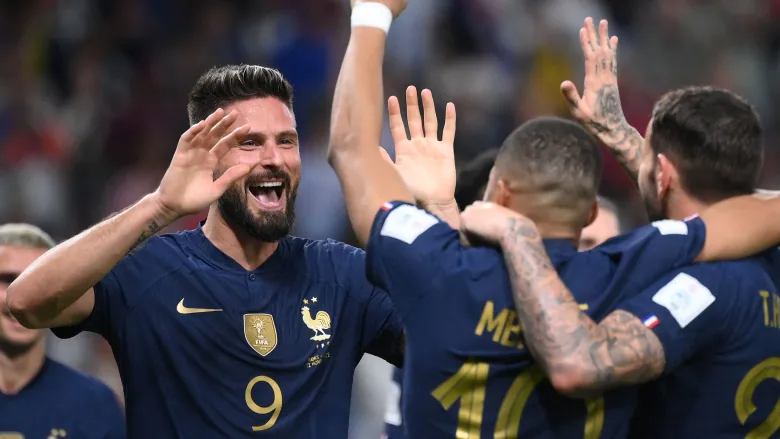 Olivier Giroud moved level with Thierry Henry as France’s all-time top men’s scorer after his brace led the World Cup holders to a 4-1 win over Australia in their Group D opener at Qatar’s Al-Janoub Stadium on Tuesday.

The 36-year-old grabbed his 50th and 51st goals for Les Bleus as they opened their 2022 World Cup group stage campaign with a comeback victory.

Giroud tapped in France’s second of the evening after Adrien Rabiot stole the ball off of Nathaniel Atkinson and squared for the Milan striker.

After missing a stunning overhead kick in the second half, Giroud levelled Henry’s record with a trademark header from a Kylian Mbappe cross.

Giroud’s record-tying brace came on his 115th appearance for France, now sitting fifth on that all-time list. He needs eight more caps to move into the top three, with Henry currently third in those standings on 123.

Laurent Blanc handed Giroud his France debut back in 2011 while he was playing for Ligue 1 side Montpellier and he has since written himself into his country’s folklore.

His selfless style of play was crucial to France’s 2018 World Cup win, while he has developed outstanding on-pitch relationships with fellow forwards Mbappe and Antoine Griezmann.

Giroud was set to start the 2022 campaign on the bench before Karim Benzema pulled out of the tournament through injury.

There were more chances for France through Hernandez and Ibrahima Konate but the result was satisfying enough, bearing in mind that in 2002 the defence of their title started with a 1-0 loss to Senegal and was followed by a first-round exit

Australia coach Graham Arnold said his team ran out of gas against a superior side.

“Look, at the end of the day, they’re are a quality side. They are world champions for a reason,” he added.

“I thought the first half, we did well. Second half, we ran out of legs a bit, but that’s the type of level of those players play at.”

France will next take on Denmark on Saturday after Australia face Tunisia earlier in the day.